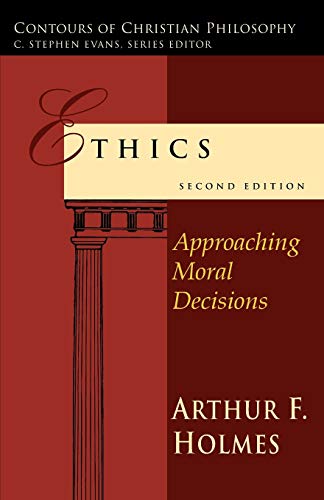 This, the third book in Inter-Varsity’s Contours of Christian Philosophy Series, edited by C. Stephen Evans, presents us with an overview of Christian philosophical ethics. Holmes, who is chairman of the philosophy department at Wheaton College, treats both ethical theory and its application to various contemporary issues.

The very important first chapter sets the stage for the ensuing discussion. Here Holmes clearly delineates the relationship of the Bible to ethics. He finds that there is a mutual inter-dependence in which biblical morality and philosophical ethics both make contributions to each other. With that foundation laid, Holmes moves on to examine positions which are not amenable to a Christian interpretation.

Holmes examines in turn cultural relativism, emotivism, ethical egoism, and utilitarianism. He tries to be sensitive to their subtle variations and their potential truth; nonetheless, they come out inadequate for a Christian ethic.

The next three chapters are given over to Holmes’ development of Christian ethics. He argues that a Christian ethic must be committed to both love and justice, implemented according to specific cases on the basis of an understanding of what is universally human. Ultimately the ethical obligation, the ‘oughtness’, derives from God himself.

Now Holmes turns to four areas of practical application. The first one is human rights, a category under which Holmes defends a multitude of positions ranging from political self-determination to a moderately conservative stance on abortion. In the following chapter on criminal punishment, he argues for a view combining rehabilitation and retribution. Holmes’ answer to the question of the next chapter, whether we can legislate morality, will not win him too many friends because in its guardedness it fails to endorse either a libertarian or a paternalistic approach entirely. The chapter on sex and marriage provides a fresh reminder of the need for both love and justice in this most intimate expression of personhood.

Holmes closes his book with a creative defence of the classical position that ethical decisions are inseparable from personal virtue.

The greatest merit of this book lies in its unapologetic commitment to Christian principles (or at least a Judeo-Christian theism). One does not have to wait for the last paragraph of each chapter, let alone the last chapter of the book, to learn of the Christian perspective. Clearly Holmes intended to develop a Christian ethic, and he never lets the reader drift away from this point.

The chief drawback of the book is that it is simply too ambitious. Holmes’ attempt to make reference to all major competing systems, develop his Christian approach, and apply it to almost all topical concerns, prevents him from doing justice to any view, even his own. The book reads at times like a well-written précis of a much more detailed exposition where oblique references to important thinkers are expanded and tenuous linkages in arguments, such as the one from human rights to egalitarian marriage, are filled out. One wishes Holmes had concentrated more on a few topics in depth.

But the benefits outweigh the costs. This book is well worth reading, especially if accompanied by further literature or classroom instruction.