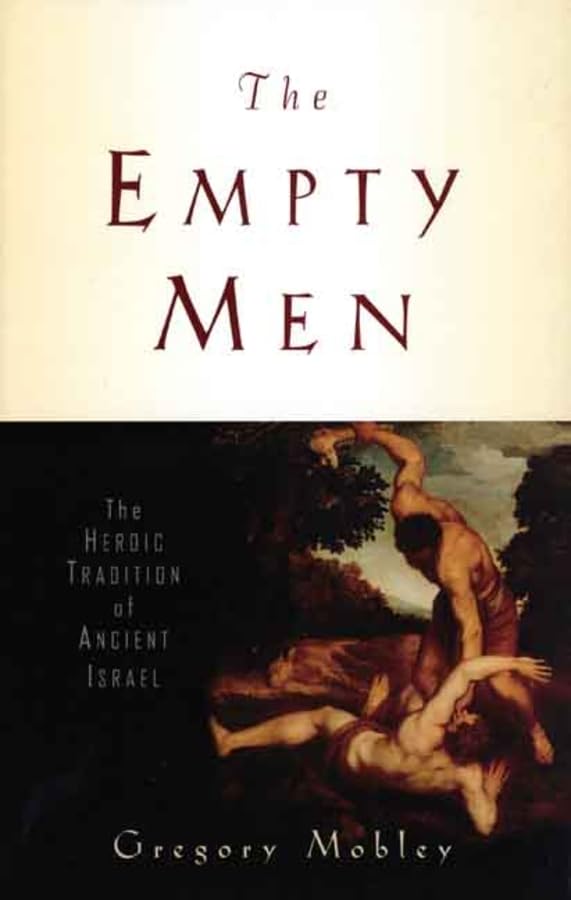 THE EMPTY MEN: THE HEROIC TRADITION OF ANCIENT ISRAEL

Focusing on the book of Judges, Mobley purposes ‘to reconstruct the outline of early Iron Age Israelite warrior culture [or, ‘heroic tradition’], and to analyse the conventions and appreciate the structure of biblical adventure stories’ (5). The biblical narratives, extra-biblical texts and archaeological evidence suffice as sources for such a reconstruction (20), and Mobley begins macroscopically by surveying them to elucidate the heroic culture and conventions of ancient Israel (chs 2–3). On the former, for example, Ugaritic texts and 1–2 Samuel reveal the importance of prowess and spoil as well as the social stratification of heroes. Mobley identifies five general conventions: honour, the hero’s use of inferior weaponry, divine inspiration, panic and courage. The scope then narrows to three characters in Judges—Ehud, Gideon and Samson (chapters 4–6, respectively). The last chapter follows Israel’s heroic age to its end, which was essentially Solomon’s accession to the throne.

Given the subtitle and stated purpose of the book, it is surprising to find that the chapters on Ehud, Gideon and Samson receive little discrete attention to heroic matters. Instead, the majority of the discussion centres on the structure and artistry of the narratives. Similarly, the comparative material is rather meagre. Mobley does explain that his use of extra-biblical parallels is for ‘explicating details in the Bible rather than [for] combing these texts for examples of heroic themes and motifs’ (p. 16, n. 6). A fuller use of thecomparative material would, however, have augmented the biblical portrait of the hero and heroic conventions as well as the similarities and differences between Israelite and non-Israelite heroic culture. There is, furthermore, the choice of comparative sources. A significant proportion of Mobley’s comparative inventory is comprised of Ugaritic texts (ca. 1400–1350 bc), which describe the prowess of the warrior goddess Anat (22–25). But why adduce myth when epic sources are available? Homer’s Iliad, for example, is replete with human combat and other heroic conventions in common with those of ancient Israel. It also reflects a heroic age which is more proximate to that of ancient Israel (i.e. ca. 1200 bc).

The book is, nevertheless, worthwhile in several respects. It renews attention to the heroicalness of ancient Israel, which has been largely neglected by scholarship in recent decades. Although the conflicting purpose of heroic literature and the Old Testament mean that Israel’s heroes and heroines feature minimally in the Bible, their desires were akin to those of heroes from around the world throughout time. Studies such as Mobley’s thus throw light onto this non-cultic dimension of life in ancient Israel. Perhaps the most significant contribution of the book is its insight into the sociological heterogeneity of Israel’s heroes. By careful attention to the Hebrew terms commonly used for ‘hero’, and by drawing on archaeological evidence, Mobley distinguishes different classes of heroes. The compound gibbôr chayil (e.g., Judg. 6:12), for instance, has been translated as ‘mighty warrior’ (NIV, NRS), ‘valiant warrior’ (NAU) and ‘mighty man of valour’ (ESV, RSV). Because chayil denotes ‘both wealth and strength’, Mobley suggests that the compound indicates a hero of socio-economic means (35). Conversely, the adjective rêq means ‘empty’ or ‘vain’. Hence, the compound ‘ănāšîm [‘men’] rêqîm (e.g., Judg. 11:3) could be translated literally ‘empty men’—the title of the book (cf. ‘worthless fellows’, ESV, NAU, RSV; ‘group of adventurers’, NIV; ‘outlaws’, (NRS). Mobley argues (38) that the compound reflects a class of heroes who were ‘empty’ in the sense that they lacked social connection or the security of primogeniture. Such ‘empty men’ therefore formed alliances with each other, operating as mercenaries to ‘local potentates’ in exchange for land or ‘patrimony’ which were otherwise unobtainable. Furthermore, the ritual dimension of heroic culture—often (incorrectly) regarded as non-heroic in the literature—receives proper emphasis. Moreover, apart from heroic issues, the book has several insightful observations on structural features and literary aspects of the Ehud, Gideon and Samson narratives.

To the extent that the book’s aim is to furnish an ‘outline’ of ancient Israel’s heroic culture and conventions, it is successful. Readers will come away with an awareness and deeper appreciation of the complexity of some of the most intriguing figures in the Old Testament.