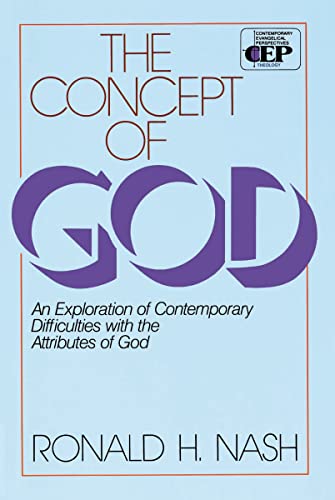 The Concept of God: an exploration of contemporary difficulties with the attributes of God

This is a book intended for the beginner in philosophy of religion. It is written for the (Christian) theist who thinks that God has attributes and that we can know something about them. And it adopts a classical, Thomist view of Christian theism. The value of its pages is that it puts into readable terms the basic arguments of those professional philosophers who develop and then use their own jargon and so make their important discussion virtually inaccessible to the uninitiated.

The topics examined are: omnipotence; omniscience and human freedom; two recent objections to omniscience; eternity; simplicity; immutability and necessity. Dr Nash explains the classical, orthodox approach to each of these topics and then summarizes and criticizes significant modern discussions. Thus the book is not about whether God exists or what kind of defence can be presented for classical theism.

Further, the book is not about the connection between a right concept of God and the practical tasks of preaching and pastoring. It only deals with an intellectual problem—that connected with the statement of the attributes of God in classical theism. Thus it appeals only to those who want to think clearly and traditionally in this area.

There is a seeming lack of consistency in the general plan of the book. The opening chapter initiates an interesting contrast between the ‘God’ of process theology (panentheism) and the ‘God’ of classical theism but this contrast is not followed through in later chapters. For in these chapters the criticisms of classical theism from contemporary philosophers (mostly in the linguistic tradition) are noted and answered. I cannot understand why more attention was not given to answering the objections of such process thinkers as Ogden, Cobb and Griffin in the main body of the book.

This said, I still think that the book will be useful for those making a start in philosophy of religion or apologetics.