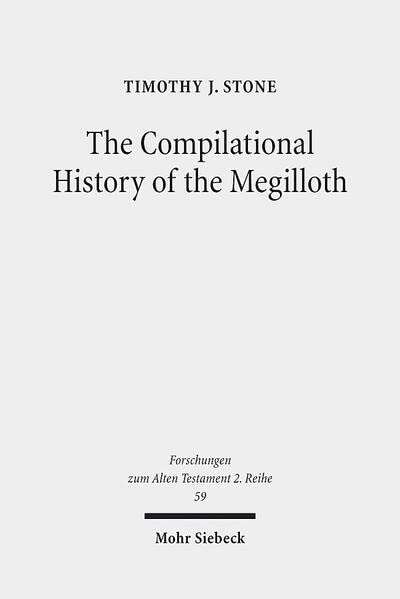 What are the Megilloth, and what difference does the history of its compilation make? The Megilloth are the “five small scrolls” (i.e., Ruth, Esther, Song of Songs, Ecclesiastes, and Lamentations) in the third section of the tripartite Hebrew Bible referred to as the Writings. The issue of how these scrolls came to be grouped together is related to the wider question of when and how the Writings began to be considered in relationship to one another. Some think that the OT canon was not closed until after the time of Jesus, and this view is often accompanied by the idea that the Writings are a random collection into which later rabbis sought to introduce meaningful organization.

In the present book, Timothy Stone makes a historical and exegetical case for the view that these five small scrolls were intentionally grouped together into a meaningful arrangement as the canon was being formed and that “the tripartite canon was likely closed within mainstream Judaism sometime considerably prior to the end of the first century C.E.” (p. 3). Stone builds on the work of Brevard Childs, Roger Beckwith, Julius Steinberg, Christopher Seitz, and others. He first discusses the issue of “Canon and Compilation” (ch. 1), contending that “[c]anonization is not a dogmatic judgment passed down from above, but rather one at work in the canonical process” (p. 13). Using the assembling of the Twelve Minor Prophets into a meaningful whole and the strategic arrangement of the Psalter as points of comparison for what he argues about the five small scrolls, Stone develops “compilational criteria” that he employs to analyze the relationships between the five small scrolls: 1) catchwords at the end or beginning of juxtaposed books; 2) framing devices such as inclusios; 3) superscriptions; and 4) thematic considerations (p. 33). Discussions of the collection and arrangement of the Writings follow, and these set up the exegetical probes Stone uses to test and confirm his theories. Ruth and Esther receive chapter-length treatment, and then the Song of Songs, Ecclesiastes, and Lamentations are sounded before Stone summarizes his findings.

Stone helpfully sets out three theses that outline his project (p. 9). I will shorten these theses further, allotting only one statement for each. First, the tripartite canon of the OT was closed well before the end of the first century AD. Second, there are only two main arrangements of the writings before the eleventh century AD (after which orders proliferate): those found in Baba Batra 14b and the MT. Third, the five small scrolls are purposefully arranged (with slight variations) and sit in the middle of the Writings, preceded by a wisdom collection, followed by a national-historical collection.

I am enthusiastic about the confirmation Stone provides for an early closure of the OT canon and the purposeful arrangement of those books. His project is a stimulating contribution to the pursuit of canonical biblical theology. As intriguing as his suggestions are, however, and as much as I agree with him that the canonical context of a biblical book should influence its interpretation, I hold vastly different conclusions on the meaning that results from consideration of the canonical context of books such as Esther, Song of Songs, and Ecclesiastes. Stone’s view is that the canonical context of the book of Esther results in the conclusion that Hadassah (the character named Esther) is “an assimilated Jew who has forgotten Israel’s God” (p. 173). Privileging other canonical material, I would see Hadassah as a model of biblical femininity, a faithful Jew who trusts God and makes the best of a bad situation. This example illustrates the inevitably subjective, perspectival nature of the necessary task of looking beyond the boundaries of a particular biblical book for wider canonical context.

In summary, Stone proposes a chiastic structure for the organization of the five small scrolls:

Ruth is positive, Esther negative; the best Song is matched by the worst. At the center of the chiasm stands Ecclesiastes, the only book in the collection that “lacks a main female character” (pp. 206–7).

Some of the interpretive conclusions Stone draws, such as the idea that Mordecai and Esther are made to appear in a negative light by virtue of the way their actions differ from those of Daniel and his friends in Dan 1–6, seem speculative and unwarranted. I remain unconvinced that the author of Esther intended his audience to derive a negative conclusion about Esther and Mordecai because their circumstances were different than those of Daniel and his friends.

This point about authorial intent leads to a wider difficulty with the project of deriving meaning from the arrangement of the biblical books—and I say what follows as one who seeks to do canonical biblical theology and believes that English translations should adopt the tripartite order of the books of the OT. In my view, the biblical authors were “carried along by the Holy Spirit” (2 Pet 1:21), with the result that the final form of what they wrote should be regarded as inspired by the Holy Spirit. With this, the controlling concern in interpretation is what the Spirit-inspired biblical author intended to communicate. So unless it can be shown that the author of Esther, for instance, consciously composed Esther to be read against the backdrop of Dan 1–6 and as a foil to Ruth, intended meaning is being attributed to someone other than the biblical author. It seems impossible to establish that an inspired prophet such as Ezra was responsible for the arrangement of the canonical order of the books, though there is strong evidence that Ezra may have done just that. If we cannot be certain that the Spirit inspired a prophet to organize the books into meaningful arrangement, then it seems we are considering the history of the reception and interpretation of the books and their arrangement rather than interpreting the intended message of the biblical author(s).