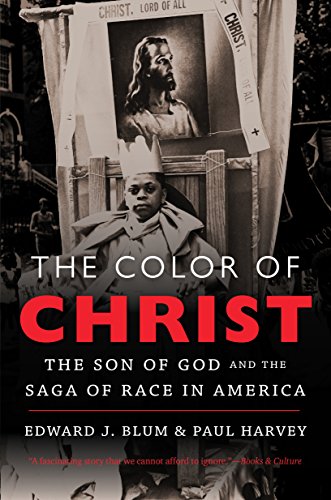 The Color of Christ: The Son of God and the Saga of Race in America

December 11, 2013, Fox News anchor Megyn Kelly caused a media firestorm with her controversial statement that, as a matter of fact, both Santa Claus and Jesus Christ just simply are “white.” As the wider media underscored the ridiculous nature of Kelly’s comments, and her follow-up admission two days later revealed that she had only just then discovered that Jesus’ whiteness “is far from settled,” something profoundly troubling, acutely ignorant, and deeply American surfaced.

Kelly would have been well-served had Fox News, on her following “sick day” from work, prescribed that she read a book that had already one year earlier located her on the American scene: Blum and Harvey’s The Color of Christ. Written by two historians of American religious history, this book “explores the ways Americans gave physical forms to Jesus . . . and how they remade the Son of God visually time and again into a sacred symbol . . . [chronicling] a multiplicity of American dreams and visions and, by showing how Americans imagined and depicted Jesus Christ’s body, skin tone, eye color, brow shape, and hairstyle, reveal[ing] a new face of the power and malleability of race in our history” (p. 7).

The book addresses questions of precisely when people began to understand racial power differences divided by the notion of “white,” co-opting the very Son of God for this agenda, and making him into the “white” Jesus that would sanction efforts of oppression. This included the complicated reception history of the “Publius Lentulus letter” written during the medieval period, falsely purporting to be written during Christ’s lifetime, describing Jesus’ physical appearance while linking it to moral qualities (pp. 20–21). In the nineteenth century, the letter gave a fabricated history of authenticity to the idea that Christ was white, cultivating the art of white Americans to join the white Jesus tradition of earlier European art. White supremacy lurked. According to Blum and Harvey, it wasn’t until the civil rights era that this idea of the “white Jesus” was demolished and the “Publius Lentulus letter” shown again to be a lie, and the myth squashed. It’s apparent, however, that nobody told this to Megyn Kelly, operating in a context on the contemporary American scene where “white” still means something.

Noting the difficulty of finding any African Americans before the nineteenth century referring to Jesus as white, or by any particular color, the book highlights how depictions of Jesus increasingly emerged amid an era of dreamers and visionaries, yielding Jesus images with many different physical renderings. This was especially true in the late eighteenth and early nineteenth centuries where a white Jesus was expressly mass-distributed, leading to a birth of the white American Christ at the same time that “being a white man was becoming a marker for political status, power, and opportunity” (p. 77). Americans were remaking the Son of God in their own image, as it were.

But it was not the whites who contained Christ. The suffering servant resonated deeply with the African American communities, especially of slaves who gravitated to Jesus’ humble his suffering and gruesome execution, as well as his glorious resurrection and ultimate victory. His story resonated with their own, and stories like Harriet Beecher Stowe’s Uncle Tom’s Cabin emerged, being fueled by the association of the suffering slave with the suffering of Christ. The volume also considers the imperialistic mentalities imposed on Native peoples, which led to very complicated relationships between Native American institutions and their missionary benefactors, as it were. As time went on, however, these different groups came to view Jesus from their own contexts; further, they viewed him as one of them in ways profoundly localized and culturally embedded. It was these expressions, in the Harlem Renaissance, say, that changed Western theology by its impact on, for example, Dietrich Bonhoeffer (see Reggie L. Williams, Bonhoeffer’s Black Jesus: Harlem Renaissance Theology and an Ethic of Resistance [Waco: Baylor University Press, 2014]).

But that there would be a black, or white, or Native, or Asian Jesus depicted in any context, representing the homoousios humanity in solidarity with humanity should be of no surprise. I recall the first time I saw an Easter pageant at a black church. That Jesus was black shocked my sensibilities. But who else would play Jesus in a black church? How else would he be represented? What else would he be?

So why does this matter? And why does it matter for evangelical pastors and leaders? It matters not merely because the history of Jesus’ rendering matters. We’ve got plenty of resources—from Larry Hurtado to Tom Wright to Michael Bird; we’ve got the actual biblical text to know that Jesus wasn’t white. We’ve got NT scholarship aplomb to show us the first century Jesus of Nazareth and what may be known about him. But this doesn’t mean that depictions of him are done, especially in various epic Hollywood imagings. From Cecil B. DeMille to Mel Gibson to Mark Burnett and Roma Downey—these aren’t going away. On some accounts of theologians, these imagings are indeed reflection at some level on the actual substance—the real Jesus.

And this is precisely why pastors and leaders should be familiar with these various cultural expositions, which themselves remain expositions rather than the real Jesus. In an essay written fifty years ago Robert Detweiler made this point (“Christ and the Christ Figure in American Fiction” in New Theology No. 2 [ed. Martin E. Marty and Dean G. Peerman; New York: Macmillan, 1965], 297–316), arguing that controversy in American society ensues when readers equate the fictional Jesus with the Christ of Faith, the man Jesus or Christ the Redeemer. The point is well made there, and yet there is something of closer, more faithful expositions of the NT, first-century Jesus that need to be rendered. And therein, believers will find their own forms of critical, constructive, reflective commentary on this Jesus who, by the grace of God, we will find looking just like us, suffering with us, and making the way for our healing. But additionally, we will not only find him being expounded in ways that look just like us—he will also be expounded in ways that render him looking just like every tribe, tongue, nation, and people.

It’s for these reasons, and for a deeper sense of the injustices occurring when Jesus’ image is co-opted that American pastors and leaders especially ought to assimilate Blum and Harvey’s research into their understanding of race issues in U.S. history; this book has become a staple in U.S. History courses in American universities. (NB: the recent controversy from a withdrawn review in the Economist of Cornell historian Edward E. Baptist, The Half Has Never Been Told: Slavery and the Making of American Capitalism [New York: Basic, 2014], highlights that race issues in American history remain deeply misunderstood.) But The Color of Christ is also significant for introducing theology students to this massively significant matter when teaching Christology. The fact is that in most cultures Jesus has been imaged in various ways. These will all have varying degrees of faithfulness to the biblical text and varying depths and forms of meaning in particular communities. But it is in these various contexts, such as that of Ms. Kelly of Fox News, that the biblical Jesus stands ready to both correct, subvert, and fulfill as the true Savior of all.