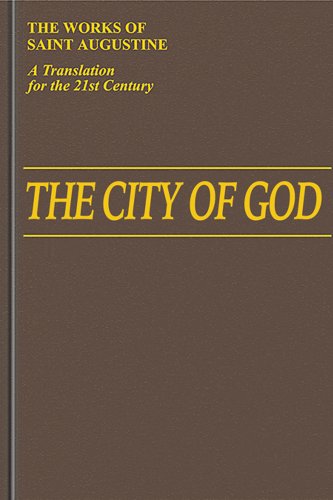 City of God is the longest text centered on a single argument to have survived from Greco-Roman antiquity. The challenges of translating such a work arise not just from the brute size of the task, but also from the variety of topics Augustine treats, the complexity of his Latin, and the intricacy of his argument. It is thus no small accomplishment—and service—that William Babcock has rendered Augustine’s prose with such skill, vibrancy, and verve. This new translation will deservedly become the standard for many years to come.

Babcock’s translation is the latest volume from The Works of Saint Augustine: A Translation for the 21st Century, a series that aims to produce the first complete English translation of Augustine’s corpus. Since the late-nineteenth century, City of God has been translated in its entirety into English five times. Henry Bettenson (Penguin, 1972) and R. W. Dyson (Cambridge University Press, 1998) have enjoyed pride of place, though each has its weaknesses. Bettenson is lively but free, while Dyson intentionally sacrifices “elegance to accuracy” (p. xv). Both rely on the critical edition of B. Dombart and A. Kalb (4th ed., 1928–29), reprinted in the Corpus Christianorum Latinorum (1955), as does Babcock.

Babcock’s translation succeeds in both fidelity and style. Books 1–10 present some of Augustine’s most energetic polemic. Babcock stays close to the Latin while communicating the briskness of Augustine’s arguments with punchy prose and memorable turns of phrase. The Romans were an “empty-headed multitude of fools” (4.23; stultorum hominum multitudo vana), obsessed with a “throng of godlings” (4.9; turba minutorum deorum) in their “prissy craze for theatrical shows” (1.32; ludorum scaenicorum delicata . . . insania). Sulla’s victory over Marius exercised such cruelty against the condemned that “it was as if Rome’s own bright eyes were on a rampage against her own limbs” (3.29; tamquam suorum luminum in sua membra ferocitatem). Yet what counts in trial is not the suffering but the sufferer: “In one and the same fire, gold glows red but chaff smokes . . . Stirred by the same motion, filth gives out a foul stench, but perfume a sweet fragrance” (1.8; sub uno igne aurum rutilat palea fumat . . . nam pari motu exagitatum et exhalat horribiliter caenum et suaviter fragrat unguentum).

Babcock’s most obvious innovation is the decision to replace the subheadings that typically precede each of the chapters (but are not original to Augustine) with his own, inserted at longer intervals according to conceptual inflection points. The new subheadings elucidate Augustine’s arguments and provide the text a different “feel”—less a series of points than an exposition with units—though some decisions might be questioned. The subheading on the demons as intermediaries would be more appropriate before 8.18, for instance, than in the middle of 8.19. Babcock’s summaries of each book reflect close attention to textual and conceptual detail, but the summary of Book 2 makes Cicero’s argument concerning republics and justice sound like Sallust’s.

Babcock’s general introduction is thirty-eight pages (pp. ix–xlvi) and consists almost entirely of a summary of the text. This reading is itself an achievement, covering seemingly every significant facet of Augustine’s textured argument without getting bogged down in details or lengthy explanatory remarks. There are, however, no sections dedicated to composition, sources, key themes, influence, or the place of City of God in Augustine’s larger oeuvre. Babcock also provides thoughtful remarks on critical translation decisions, along with a brief but well-chosen bibliography. The second volume of this text will include a Scripture index and an index for subjects and names. (I am grateful to New City Press for allowing me to see the indices in advance.)

In a translation of this length, some quibbles will naturally arise. Some words could have been rendered more consistently without trouble: luxuria is “extravagance” in 1.31, but “luxury” in 3.21 and “self-indulgence” in 5.12. A more challenging case is felicitas, which can refer either to the goddess or to the synonym for “happiness.” At least in discussions that connect Felicitas with felicitas, consistent use would have matched Augustine’s rather literalistic point, yet Babcock often switches between “felicity” and “happiness” (4.18, 4.23, 4.25, 4.33). Babcock has chosen to translate res publica as “republic” and res populi as “the common good of a people.” His reasons for doing so are carefully considered (p. l), but the notes on the critical discussion in 2.21 could have made this connection clearer. The same applies for the relation between “a common sense for what is right” (iuris consensus) and “justice” (iustitia). Babcock does not promise to eliminate all generic uses of “man” or “men,” but given his discussion (p. lii) of the distinction between homo (“human”) and vir (usually but not always “man”) as well as Augustine’s own discussion in 22.18, one might have expected closer attention to gender-neutral language (5.14, 7.30, 8.24, 9.10 inter alia).

With its painstaking treatment of Roman history, religion, and philosophy, the first half of City of God has sometimes been neglected in favor of the more explicitly scriptural Books 11–22. Yet Books 1–10 are no prologue to Augustine’s biblical exposition, nor do they record matters of merely antiquarian interest. These books advance an extraordinarily incisive critique of communities consumed by temporal loves whose penetrating relevance for contemporary Western culture continues to impress. For the “massive and arduous work” (1.praef) of presenting this case anew, future readers are indeed in Babcock’s debt.