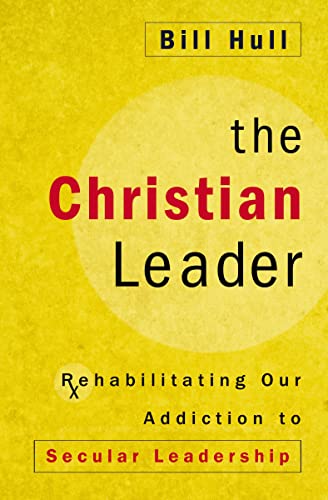 The Christian Leader: Rehabilitating our Addiction to Secular Leadership

While there is an abundance of books and resources on the topic of Christian leadership, it does not appear that these resources are making a substantial difference in the church since “the American church is not producing mature leaders and followers of Christ who are vibrant, mature, and engaged with their neighbors and communities” (p. 33). In the mind of Bill Hull, a writer and speaker who has spent much of his career focused on discipleship, this failure is due to these resources teaching a kind of leadership that does not reflect the form of leadership that Jesus taught, modeled, and calls Christians leaders to embody.

In this book, The Christian Leader, Hull seeks to paint a different picture of leadership than that offered in other resources by drawing attention to Jesus as the ultimate leader, one who might not fit the standard vision of a leader found in the world but is “our leader and our model for any leading that is to be done in his name” (p. 17). Hull calls “for the deconstruction of the irrelevancy of Christ as leader” (p. 19), comparing this deconstruction process to going into rehab for an addiction, as we must be emptied of our view of what a leader looks like (and addiction to this idea) and see Christ as teaching and showing us what a true leader is like. This vision of leadership, according to Hull, is not just for pastors but for all Christians who have people who listen to them and follow them (p. 17).

The first chapter focuses on having a new perspective on Jesus by highlighting Jesus’s uniqueness and also his place as a leader who exhibited a different style, calling for leaders to adopt his practices. The book then proceeds to explore this form of leadership by looking at Jesus, Hull’s own story, and the examples of many leaders of different eras in the eight chapters that explore where to find happiness (ch. 2), how to define success (ch. 3), how to view the world (ch. 4), what humility means and looks like (ch. 5), how to serve others and have a different purpose (ch. 6), how to lead in hard times (ch. 7), what the reward is for leaders (ch. 8), and how one must continually develop as a leader (ch. 9). Themes that repeatedly emerge in these chapters include serving others rather than using others, having a goal of helping others progress towards Christ rather than one of finding success or accolades in the secular or Christian world, viewing the ordinary and mundane as important, and being patient and following God’s timing rather than trying to push one’s own agenda forward in his or her own timing.

At first, I was a bit concerned about Hull’s approach and focus on Jesus as an example of leadership. While Christ is certainly an effective leader, I am not sure if his methodology is designed to be replicated in all leaders in light of his unique calling and unique position as the Messiah and Son of God; his ministry is not necessarily a manual on Christian leadership but the fulfillment of God’s redemptive plan. However, Hull goes beyond presenting Jesus as an example, explaining how his person and lordship should have profound effects in the lives of his followers. Hull’s call is actually for leaders to lead like Jesus in that they lead from who they are rather than what they do or can do (see p. 18); therefore, Christian leadership flows out of finding our identity in Christ. The foreword by Robby Gallaty picks up on this important emphasis as well, noting that Hull “doesn’t just explain how to act like Christ,” but also “explores how to be in Christ” (p. 11).

In light of the great number of books on leadership, it is good to know what makes this book different and justifies its publication and reading. While each chapter (except for chapter 1) features a quote and a passage from Philippians 2, this book does not engage in a systematic study of that passage, nor is biblical exposition its major emphasis. Historical examples of leaders are always interesting, though the introduction led this reviewer to believe that there would be a special focus on Winston Churchill and Josephus when these figures do not seem to play a more prominent role in the book than others (it is unclear why these figures are named in the introduction rather than Dallas Willard, Eugene Peterson, Dwight Eisenhower, Harry Truman, or Dietrich Bonhoeffer, the latter of whom appears to be mentioned more than Churchill, likely due to Hull’s work on “The Bonhoeffer Project”). What stands out in this book is the openness with which Hull writes and shares about ways he has tried to live as a Christian leader, including the ways that he has failed in past situations. For example, Hull shares how he did what many pastors do in terms of climbing the “church ladder” of going to bigger churches when one gets “bored” pastoring his present church (p. 165). He also notes how he left a church before accomplishing what he thinks God’s mission was for him there because it was riddled with problems and he was not fully committed to the “ways of Jesus” (pp. 85–86). At another spot, Hull acknowledges his struggle to let crowds define him in his discussion of humility (p. 111). Overall, Hull’s transparency and self-reflection throughout is refreshing and illuminating, and it presents an invitation to the reader for reflect on his or her own leadership and shortcomings.

This book seems targeted towards Christian leaders who have spent time looking at secular books on leadership and need a corrective, or who have a temperament similar to that of Hull and need to learn from someone else’s struggles and realizations. I am not sure if this book would make a short list of the best books on Christian leadership, but if I knew of a leader or an emerging leader who seems drawn towards the vision of leadership that Hull seeks to counter, I would readily give them a copy of the book or invite them to read through it with me. There is value in this work and readers will benefit from it, but its message does not seem groundbreaking, as numerous other writers have sought to differentiate true Christian leadership from the forms and models of leadership espoused in our world.