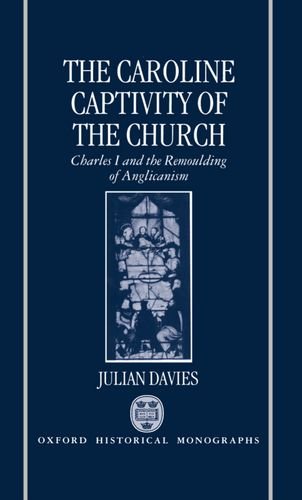 The Caroline Captivity of the Church. Charles I and the Remoulding of Anglicanism

No British king has been the object of more opposing judgments than has Charles I. Vilified by democrats and canonized by a certain type of Anglican, Charles’ life was marked by so many contradictions that it is almost impossible to give a fair assessment of him. On the one hand, he was a faithful husband and a devout member of the Church of England. In his eyes, the church was the cornerstone of his kingdom, the one institution which he, as the monarch, was duty-bound to govern and protect. On the other hand, Charles had such an idiosyncratic understanding of what that duty entailed, and such an exalted idea of his own ability to impose his views on others, that he alienated a large proportion of his subjects and eventually destroyed both himself and the church establishment which he was trying to secure.

In telling this story, Dr Davies puts the blame squarely where he thinks it belongs—on the shoulders of the king himself. The widespread view that Charles was propelled onto his fateful course by the fanaticism of Archbishop William Laud is carefully dismantled by a painstaking review of the evidence. It turns out that Laud was a moderate in comparison with Charles, and that he often mitigated the impact of the king’s decrees in his own diocese. On the whole, though, Laud was Charles’ loyal and enthusiastic servant, who shared much of the king’s ecclesiastical vision and was normally a willing instrument of royal policy. The main point however is that it was Charles, and not Laud, who determined what that policy would be. The difference between them was that Charles believed in divine-right monarchy, whereas Laud believed in divine-right episcopacy. These views could easily conflict, especially as Charles felt that many of his bishops were less than totally enthusiastic for his vision of the church.

From the very beginning of his reign, Charles was determined to impose order and discipline on a church which to his mind had got dangerously out of control. He was deeply opposed to theological controversy, and did his best to put a stop to it. This has given him (as well as Laud) a reputation for Arminianism, but Dr Davies shows that this is not correct. Charles did not want the church to take any position on so contentious an issue as predestination, which he preferred to leave to the judgment of the individual conscience before God. What concerned him much more were the rites and ceremonies of the church, of which a distressing number were being neglected or corrupted by the time he became king (1625).

Rather than bow gracefully to a trend which he could not control, as his father had been inclined to do, Charles was determined to put matters right. To that end he prosecuted ministers for canonical disobedience, and did his best to give his bishops control over parochial discipline. He thought that the clericalization of the church would increase his own authority over it, and seemed to be unaware that the majority of the clergy were hostile to his whole programme. To make matters even worse, Charles was lax in matters where his Puritan clergy were especially strict—notably in the case of Sunday observance. Charles not only allowed Sunday sports but did his best to encourage them, a move which aroused the Puritans to anger and did little to counteract the effects of his rigidity in other areas.

More ominously still, at a time when Protestantism was fighting for survival on the Continent, Charles did little to support the cause which he was nominally pledged to defend. His own wife was a Catholic, and there were a few prominent conversions to Rome among the smart set at court. Charles was a loyal Anglican himself, but his perceived tolerance of the enemy did him no good. At last, his attempt to impose a High-Church Anglicanism on Scotland led to a revolt which was the beginning of the end for him.

Dr Davies presents a balanced and judicious review of Charles and his policies, in which he decisively discounts the impact of Laud and Arminianism on the course of events. Not until 1640 could it be said that Laud’s vision of divine-right episcopacy merged with Charles’ idea of divine-right monarchy, but by then it was too late for Laud to influence events in any way. Rather, it appears that Charles’ concessions to Laud were part of an attempt to make the latter a scapegoat for royal policies which had failed. Dr Davies argues that some highly-placed persons realized this, and shielded Laud from his eventual fate for over four years.

Today, the legacy of these events lives on in our churches, whose divisions largely reflect positions taken in response to Charles I and his policies. Theological students are still familiar with the great divide between ‘Calvinists’ and others, more vaguely labelled ‘Arminians’, and the great doctrinal works of the period continue to be printed and purchased, if not read. Dr Davies is both an evangelical theologian and a first-class historian of this vitally important period. Theological students would do well to familiarize themselves with his book, and through it to become acquainted with the wider issues which shaped the destiny of British Christianity at that critical time.