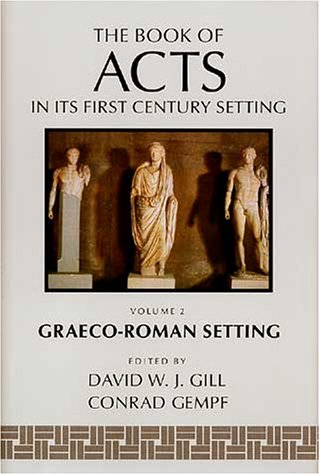 The Book of Acts in its First Century Setting. Volume 2. Graeco-Roman Setting

This is the second of an ambitious six-volume series on the literary, geographical, socio-cultural and religious background of Acts, written under the general editorship of Bruce W. Winter. The theme of this volume is the Graeco-Roman context of Acts.

The book is divided into two main sections. Part One deals with ‘Cultural and Social Issues’ and contains essays on travel and shipwreck (Brian M. Rapske), the Roman roads of Asia Minor (David French), food shortages (B.W. Winter), Roman religion in a local setting (David W.J. Gill), the imperial cult (B.W. Winter), the urban élites (D.W.J. Gill) and the house church (Bradley Blue). Blue’s chapter, based on his doctoral research work, is the longest and most substantial in the book. Drawing on the latest archaeological evidence, he offers a detailed and enlightening account of the physical conditions of early Church gatherings in domestic residences. The essay is illustrated with over 30 diagrams, plans and drawings.

Part Two is given over to ‘Provinces’ with articles on Syria (Robyn Tracy), Cyprus (Alanna Nobbs), Asia (Paul Trebilco), Galatia (G. Walter Hansen), Macedonia, Achaia (D.W.J. Gill) and Rome and Italy (Andrew D. Clarke). The second section also has appendices on ‘The Asiarchs’ (R.A. Kearsley) and ‘the Politarchs’ (G.H.R. Horsley), an article on ‘Luke’s Geographical Horizon’ (James M. Scott, arguing that Luke’s concept of world geography and ethnography was significantly influenced by the Table of Nations of Gn. 10) and an excursus on the ‘we’ passages of Acts (Stanley E. Porter, arguing that these passages point to the utilization of an independent source by the author of Luke-Acts, but probably not one originating with the author himself).

This collection of essays makes accessible to scholars and students a wealth of background information to the book of Acts, some of which has only become available in recent years. The articles are well written and represent high-quality, up-to-date scholarly research. The book is fully indexed (with indices of biblical references. ancient sources, modern authors, places and subjects). a feature which adds to its usefulness as a reference tool. As well as providing the interpreter with a range of data to elucidate the text of Acts, the volume helps to enhance the status of Acts as a document of genuine historical value, not only for NT scholars, but also for ancient historians of the first-century eastern Roman empire.