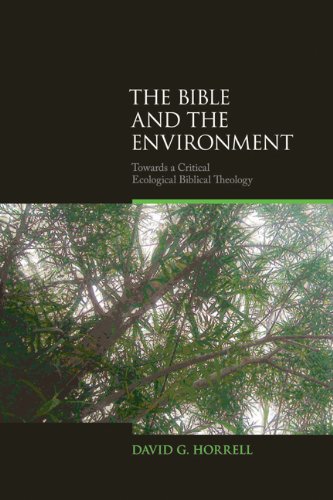 The Bible and the Environment: Towards a Critical Ecological Biblical Theology

David Horrell is professor of New Testament at the University of Exeter. He has done research on various NT texts, including the Corinthian letters and 1 Peter. He is currently the director of a project on the uses of the Bible in environmental ethics, funded by the Arts and Humanities Research Council in the UK. This volume and several others were published in 2010 based on the collaborative work under this project.

Horrell's development of an ecological hermeneutic comes in three parts. The first part consists of two chapters and is primarily descriptive of ways that contemporary Christians read the Bible when discussing the environment. In the first chapter, Horrell details some of the backstory of the present environment milieu: he discusses Lynn White's famous essay and Joseph Sittler's address to the World Council of Churches; then he discusses the present ecological problem of climate change and its symptoms. Horrell states his intention to argue “that what we need is not merely a careful reading of biblical texts, but to articulate and develop an ecological hermeneutic, that is, a newly reorientated way of reading the Bible that is demanded by our current context and the issues that face us” (p. 9). Chapter two outlines three approaches to hermeneutics that reappear at various places throughout the text. First is the recovery approach, which attempts to reconcile an authoritative Bible with an interest in ecology. Second is a form of resistance that resists any biblical text that appears to run counter to ecological principles. Third, and also called resistance, is the view that resists any idea that appears contrary to a preferred reading of Scripture.

The second part of Horrell's trek toward an ecological biblical theology examines a series of biblical texts that environmentalists commonly cite. Chapter three discusses Gen 1-2 and three different perspectives on it. Chapter four moves on to the narrative account of the fall of man and the great flood. Beginning in chapter five, Horrell deals with larger sections of Scripture and ceases to discuss different hermeneutical methods. It discusses several poetic texts, such as Ps 104 and Job 38. Chapter six considers how the Gospels deal with Jesus and ecology. Horrell's main point seems to be that Jesus is not as environmentally friendly as some have suggested. The Pauline texts that are often discussed when debating the biblical perspective on environment (especially Rom8 and Col1) are the topic of chapter seven. Chapters eight and nine both deal with eschatology: chapter eight focuses on the future visions of eschatology, and chapter nine centers on the biblical texts that deal with catastrophic end-times occurrences. Horrell's main point through the center section of this book is apparently that there are currently diverse interpretations of all of these texts that scholars in various parts of Christendom accept.

The motivation behind this becomes clearer in the third part of The Bible and the Environment. This final part of the book includes Horrell's attempt to create a positive ecological hermeneutic. The tenth chapter provides the main material for Horrell's proposed hermeneutic: “the Bible . . . is ambivalent and ambiguous in terms of its ecological perspective” (p. 117). He clarifies, “a response to our ecological crisis cannot be derived just from reading the Bible carefully and attentively” (p. 119). Horrell provides a suggested alternative to careful exegesis, namely, “interaction between the reader's contemporary context and the ancient text, so the changing contexts and demands bring new perspectives and doctrines to light” (p. 124). This interaction should rest on three pillars: historical study and informed exegesis, theological tradition, and contemporary science (pp. 125-26). Only by coming to conclusions in light of those three pillars can one hope to arrive at a valid perspective on Scripture. The final chapter of the volume lists six theological principles that should be considered when reading all of Scripture: the goodness of creation, humanity as part of the community of creation, interconnectedness in failure and flourishing, God's covenant with all of creation, creation's summons to praise God, and liberation for all things.

The Bible and the Environment has at least three significant strengths and also three weaknesses. The first strength is that Horrell touches on all of the major biblical texts commonly discussed with regard to the environment. It is true that he does this rather incompletely and with a strong bias toward revisionist readings of the text. The reader can, however, get a general feel for scholarship on all of the major ecological texts by reading this book. A second strength is that Horrell clearly states his position early in the discussion. Some scholars, when dealing with Scripture and the environment, tend to disguise their agendas and leave it to the reader to read between the lines. Horrell boldly states right in the first chapter that he wants to change the way Scripture is read. A third strength of this book is that it has both a Scripture index and an index of authors and subjects. This makes it a very useful tool for research and reference.

The first weakness of this book is that it rather unfairly dismisses any argument that holds to canonical integrity and authentic biblical authority. Horrell's ecological hermeneutic requires that the reader accept his premise that all of the various interpretations of each text are equally valid. If one rejects this central plank, then Horrell's argument does not stand. Yet Horrell does little to support the central plank of his platform. A second weakness is the failure to address current scientific data from non-theological sources. Other than the IPCC report on climate change from 2007, the remainder of Horrell's sources illustrating the ecological crisis come from theologians who were writing around a decade ago. The third significant weakness of this volume is that Horrell creates a set of categories for hermeneutical approaches (chs. 3-4) and then subsequently abandons them. This leaves the reader to try to determine what categories Horrell is discussing in the remaining chapters and if he is even dealing with all the categories anymore.

The Bible and the Environment is a useful volume for discovering the hermeneutical approach on which much of the Christian environmental movement is based. Horrell's categories for describing hermeneutical approaches are rough, but a good start. This book also provides a good bibliography of the revisionist perspective on the environment for those interested in further study. For these reasons, this book would make a useful addition to an interested scholar's library.