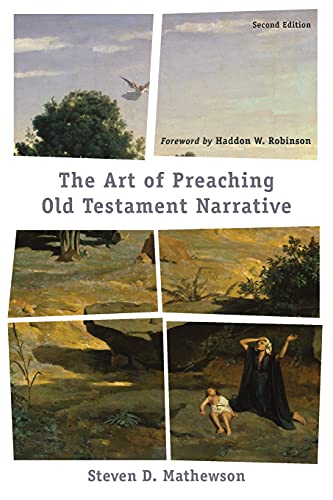 Since The Art of Preaching Old Testament Narrative was first released in 2002, the stories of the Old Testament have continued to garner increased attention. Recent developments in both academy and church invite renewed reflection. Accordingly, in this expanded and updated edition, Steven Mathewson, senior pastor of CrossLife Evangelical Free Church in Libertyville, Illinois, addresses a post-Trump, COVID era. Yet, the core aim of the volume remains entirely unchanged: a call to faithfully teach and preach the narrative literature of the Old Testament, and to do so with rigor. This is a necessary invitation for, as Haddon Robinson cautions in the Foreword, “There is no greater abuse of the Bible than to proclaim in God’s name what God is not saying” (p. xiv).

Part 1 consists of two introductory chapters. The first frankly addresses the challenge of preaching narrative texts. Mathewson notes that preachers skilled in other genres can often founder here. Importantly, he diagnoses and speaks to five underlying problems (pp. 7–12): viewing stories as “fluff”; frustration at narrative subtleties; minimizing the canonical importance of stories; finding Old Testament literature intimidating; and enslavement to a particular style of exposition. Regarding the last point, Mathewson advises, “good storytellers do not convey their stories through analytical outlines” (p. 12). The takeaway is clear for would-be preachers of narrative: neither should you. Chapter 2, new to this edition, tackles the question of preaching Christ from the Old Testament. Here, Mathewson champions a mediating position between Christocentric and theocentric approaches that attempts to draw on the strengths of each.

Part 2 contains six chapters that lead readers though the exegetical process. Chapter 3 discusses factors related to choosing a sermon passage. Chapters 4–7 then move sequentially through the acronym ACTS, looking in turn at Action, Characters, Talking, and Setting. In these chapters Mathewson inducts readers into the world of narrative literature. An array of narrative techniques and artistic devices are covered, including plot dynamics (pp. 42–46), narrated versus narration time (pp. 52–54), characterization (pp. 68–73), and the role of dialogue (pp. 75–80). The resulting insights are then utilized to formulate a “big idea,” a concept that Mathewson helpfully nuances as a synergy of the text’s exegetical, theological, and homiletical ideas (p. 94).

The seven chapters of part 3 address the homiletical task; that is, shaping the results of exegesis into a sermon. Mathewson aptly notes that determining the “theological idea” of a text is only the halfway point, and the easier half at that (p. 108). Accordingly, crafting a message for a particular audience is crucial, with all its necessary entailments regarding length, depth, style, and so on. Helpful guidance is offered regarding the culling and shaping of material: “You cannot prove or validate what people do not understand. You cannot apply what people do not accept” (p. 111). The process charted by Mathewson is essentially an exercise in principlizing: the preacher moves from the world of the text to define its central theological idea. This idea is then applied to the real world of the listener(s). Two chapters provide valuable input concerning alternative forms a narrative sermon might take (pp. 128–36) and what constitutes good storytelling (pp. 147–63).

The Art of Preaching successfully maintains a balance between theory and practice. The latter is achieved though worked examples which serve to ground principles under discussion. An appendix also provides a full sermon transcript (on Judges 17–18) which nicely illustrates the homiletic fruit borne from exegetical sweat. Mathewson has also worked hard to incorporate, and evaluate, the wealth of secondary literature produced on the topic since the first edition was published. Readers are thus inducted into current discussions surrounding narrative hermeneutics. Illustrations and examples have also been updated throughout. As a result, the book feels fresh and contemporary despite its almost twenty-year vintage.

One area of the volume that feels somewhat underdeveloped, considering recent trends in biblical studies, is the incorporation of Speech Act Theory. While the theory itself is complex (e.g., current deliberation around perlocution), it does have distinct benefits for preachers. Mathewson is aware of Speech Act Theory developments, yet, following Robinson, remains focused on the “big idea” for preaching. Certainly, formulating a “big idea,” as the phrase itself suggests, is a valuable way to distil the propositional content of a text. But, as Speech Act Theory so helpfully clarifies, asserting or declaring propositional truths is only one of many things a text may be doing and, in fact, assertions often serve higher-level functions. If, as Sam Chan persuasively argues (Preaching as the Word of God: Answering an Old Question with Speech-Act Theory [Eugene, OR: Pickwick, 2016]), the task of the preacher is to faithfully “re-illocute” the Scriptures, then attending to the full range of a text’s speech acts becomes essential. Without a doubt, stories teach; they are didactic in that sense. But they also move readers, inspire them, and allow them to imagine alterative worlds. There is an affective dimension of the text that must also be communicated.

This is a book written by a preacher for preachers. While technical matters are discussed, the focus is always on moving beyond theory to practice. Mathewson is an experienced guide who deftly leads readers through the world of Old Testament narrative and instructs regarding how best to do the same for their own hearers. Novices and seasoned preachers alike will find much here to stimulate reflective practice. If you want to preach Old Testament narrative, and preach it well, The Art of Preaching remains essential reading.