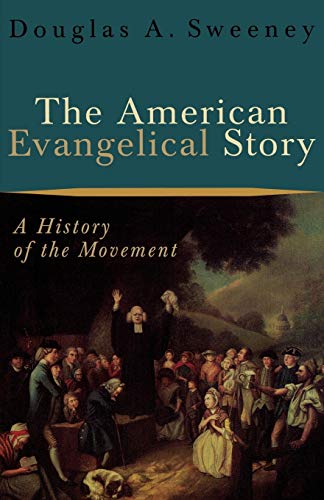 THE AMERICAN EVANGELICAL STORY: A HISTORY OF THE MOVEMENT

In recent years there has been a proliferation of books charting the development of the evangelical faith in the Anglo-American world, not least the significance of the revivals of the eighteenth century to the development of evangelical identity. There is no doubt that this has been generated by the ‘rediscovery’ and new appreciation of Jonathan Edwards who appears at the beginning of the movement, and by the contemporary resurgence of evangelical confidence in politics and society in the United States as elsewhere. Much important work has been done by the people like Marsden, Noll, Bebbington and Hatch who have helped to give a voice to the leaders of a strand of Protestantism which has often been maligned or ignored. In his book The American Evangelical Story, Sweeney’s contribution to the recrudescence of the study of evangelicalism is to be welcomed warmly.

Most helpfully, Sweeney begins with an outline of the value of the word evangelical. This first chapter plots historiographical debates concerning the usefulness of such a term, and concludes that ‘Evangelicals comprise a movement that is rooted in classical Christian orthodoxy, shaped by a largely Protestant understanding of the gospel, and distinguished from other such movements by an eighteenth century twist’, (23–24). He does not simply equate Protestantism and Evangelicalism (as some continental European scholars might), but allows the distinctives of differing historical periods to provide a cumulative definition of evangelical faith. His eighteenth century ‘twist’ is the cultural context of the Great Awakening and the revivals which it spawned. This scaffolding for the remainder of the book is most helpful.

Subsequent chapters survey the history of evangelicalism within the United States in roughly chronological order, though I enjoyed the way in which discrete themes held each chapter together: ‘Institutionalising the movement’ (ch. 3), ‘Evangelical missions’ (ch. 4), ‘Evangelical history in black and white’ (ch. 5), ‘Pentecostal and charismatic movements’ (ch. 6), and ‘Fundamentalism and neo-evangelicalism’ (ch. 7). Sweeney draws together the golden threads of the argument in a cogent conclusion in the section entitled ‘Future of evangelicalism’. His structure and prose make for easy reading, and although it is pitched towards those who may find much of the material new, the excellent critical bibliographies at the end of each chapter provide a helpful checklist for more advanced readers, as well as for college or seminary libraries wanting to plug holes in their collection of writings on the evangelical movement. Chapters also include pictures of significant evangelical leaders.

There is, however, one area which might have received more attention. The eighteenth century is indeed the cradle of the evangelical movement, but this cultural context requires more than just a discussion of revivals and missions. The Enlightenment (and later reaction to it in the Romantic movement of the nineteenth century) shaped and formed the leaders of the revivals in terms of their understanding of human sense perception, the value of an experience of conversion, tools for scholarship, interaction with indigenous North Americans, and the visible church. Expansion on this theme would have made the book more useful to those of my students engaging with post-modernity and evangelicalism, but would also have made the book longer and more complicated. In all, it is a fantastic introduction to our story and a must for course bibliographies!