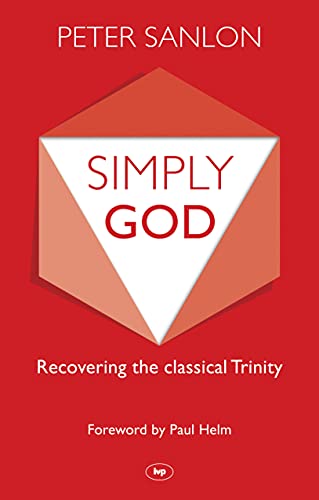 Peter Sanlon, a minister in the Church of England, has written a volume commending the God of classical Christian theism to a non-specialist audience. What makes this work different from the plethora of other Trinity studies presently on the market is the prominent consideration Sanlon gives to God’s simplicity and the attendant doctrines of divine eternality, immutability and impassibility. Without these doctrines firmly fixed in one’s mind it is difficult to ensure that one understands the Trinity in a consistently monotheistic and non-process fashion. In the eras of the early, medieval, and Reformation church, theologians were keen to keep their accounts of God’s triunity in close connection to the truth of his simple unity. Sadly, such is no longer the case and as a result we have witnessed a gradual weakening and distortion of the classical doctrine of the Trinity. Sanlon’s volume marks a return to that older venerable approach to the triune God of the Bible and the Christian tradition.

The book opens with an orientation explaining what it means to engage with God and speak about him (ch. 1). The remainder of the study is divided into two parts with Part 1 (chs. 2–5) exploring issues related to God’s simplicity and unity of being. Besides simplicity, Sanlon discusses divine eternality (ch. 3), omnipotence (ch. 4), impassibility and immutability (ch. 5). Part 2 (chs. 6–9) explores matters more formally Trinitarian such as God’s love and threeness in Scripture (ch. 6) and church history (ch. 7) as well as how to relate the doctrine of simplicity to God’s relationality (ch. 8).

The author begins his study with the fact of God’s incomprehensibility. God is not a being who is merely greater than his creatures by degrees so that to know him we need only to extend or enlarge our creaturely categories of being. God isn’t like us, simply existing somewhat higher up the chain of being. Sanlon explains, “The difference between God and his creation is not one of scale; it is a difference of order” (p. 25). Thus, if we are to speak about God at all we must rely upon his accommodated revelation in Scripture. “If we—finite created beings—are to understand a communication from the infinite Creator, there must be an accommodation to our natural limitations” (p. 38). Sanlon further details the way the Bible itself deploys analogical and metaphorical language to describe God inasmuch as creaturely language is insufficient to adequately capture him as he is in himself (pp. 39–44). This twin emphasis upon divine incomprehensibility and accommodated revelation furnishes a helpful outlook for grappling with the high doctrines discussed in the body of the work.

As for divine simplicity, Sanlon regards it as indispensable to a truly Christian way of thinking and speaking about God. “The simplicity of God,” he remarks, “is the most fundamental doctrinal grammar of divinity” (p. 58). Indeed, “without it our attempts to describe God’s attributes become idolatrous” (p. 61). Sanlon explains, “Simplicity means that God is identical with his attributes and, consequently, each attribute is identical with each other attribute” (p. 61). He ably defends the coherence of this strong version of the doctrine and carefully answers various objections to its biblical veracity. In the end, he commends simplicity as crucial to guarding the goodness and otherness of God. This argument seems basically correct, though it might have been more compelling if Sanlon had provided greater explication of why denying the strong classical version of simplicity leads to idolatry. Specifically, it does so because it makes God depend for the fullness of his being on that which is not God and so ascribes absoluteness to something more ontologically basic than God’s essence, thus rendering God an unworthy object of our highest praise and adoration.

Sanlon’s discussion of God’s love and immutability is intriguing. Following the implications of simplicity, he stresses that God does not have love, as if it were something he possessed in addition to his essence, but that God is love (p. 125). This means that God’s love “is as reliable and powerful as God himself” (p. 126). Simplicity also means that God’s love is not in conflict with his wrath. In God these realities are ontologically identical. “[L]ove and wrath are how the saved and unrepentant experience the same reality of God from their differing situations” (p. 127). Sanlon further contends that God does not experience his love as a passion that ebbs and flows. Rather he loves impassibly inasmuch as he is perfectly actual in all that he is. This is a consequent of simplicity’s claim that all that is in God is God and immutability’s claim that God does not undergo changes in his being.

The discussion of the Trinity in Part 2 is not quite as crisp or as theologically convincing as the discussion in Part 1. In order to show that both simplicity and Trinity must be held together, Sanlon plies the argument that only a trinitarian God can be perfectly loving since a full experience of love requires one share it with other persons. He insists, “The simple God who is love can be perfect love only because the simple God is three fully divine persons” (pp. 147–148). He further elaborates, “Perfect, infinite love cannot actually be experienced by an infinite being who is only one person. Such a ‘love’ would actually be a form of selfishness. Only the trinitarian God can be perfect love” (p. 163). But why is this so? While Sanlon is certainly right to emphasize intra-Trinitarian love, this is not all that needs to be said about love in the Godhead. There are aspects of God’s self-love that are not formally other-oriented, such as God’s perfect and infinite love of his own goodness. In loving the divine essence the three persons do not love something really distinct from themselves. Yet this is surely not a selfish or less-than-perfect love, is it? Sanlon carries his argument about the other-oriented character of true love so far as to suggest that God would not have been truly loving if he had not shared his infinite love with other beings (p. 184). This seems to undermine the divine aseity that is capably defended elsewhere in the volume by making God’s full actuality of love depend upon the existence of creatures.

In my estimation the author misses an opportunity to provide a substantive discussion of how simplicity and Trinity relate positively. Rather than pursuing his somewhat dubious “love” argument, he could have explained how simplicity requires the real ontological identity of God’s personal relations with his essence. Sanlon comes near this when he writes, “The simple God is three persons, who are perfectly God and perfectly relational” (p. 198). Also, he could have explained how it is that divine simplicity entails that the three persons in the Godhead are nothing but subsistent relations and that the relations are not accidents that qualify the persons. That is, he could have explained how the persons themselves are simple as persons. But no such discussion is offered. The result is that simplicity appears to sit somewhat awkwardly alongside Trinity, relying merely on the “love” argument to hold them logically together. My few criticisms notwithstanding, Sanlon’s book is one of the best popular presentations of difficult doctrines such as divine simplicity and impassibility I have seen. His patient explanation of theological method is also highly valuable. On the whole, Simply God is a wonderfully instructive volume that is sure to benefit a wide array of readers.