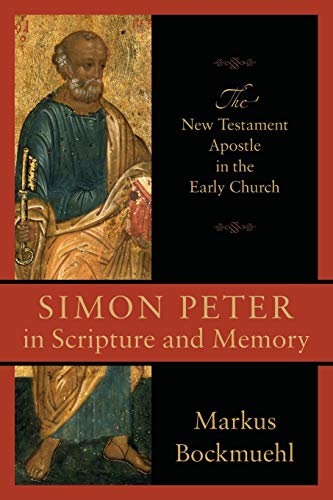 Simon Peter in Scripture and Memory: The New Testament Apostle in the Early Church

Markus Bockmuehl is a Fellow of Keble College and professor of biblical and early Christian studies at the University of Oxford. He is the author and editor of several books. The present work is his second of two volumes concerning the apostle Peter, with the first a technical study for specialists (The Remembered Peter in Ancient Reception and Modern Debate; WUNT 262; Tübingen: Mohr Siebeck, 2010). [Editor’s note: see the review of this book by Joshua Jipp in Themelios 36:1 (May 2011): 83–85.] The present work builds upon the first yet is for a wider audience (“serviceable especially to students at graduate or senior undergraduate levels, and perhaps to their teachers and pastors” [p. xiv]).

The book is a quest for the “historical Peter,” although not a conventional one. It attempts to push beyond the standard questions (and limitations) of historical criticism. The author endeavors to do so by seeking “to attend more carefully to the way Christianity’s originating figures left a footprint in living memory” (pp. xiv–xv). The historical Peter available to us is always an interpreted Peter mediated to us by documents written by interested members of diverse ecclesial communities (p. xv). The study therefore provides “a narrative of exegetical engagement with the NT Peter and his reception in the second century” (p. xiv). Of great interest is this latter emphasis: the book explores how members of the period immediately following the apostolic age portrayed Peter, since they lived during this period of “living memory.” This is the period when members who had received testimony from eyewitnesses still lived or whose recollections were still fresh. Bockmuehl writes, “We may safely conclude that the early church recognized well into the second century a select group of what we might call sub-apostolic bearers of memory, who were widely regarded as—and in some cases perhaps were in fact—living links between the leaders of the apostolic generation and the churches that followed them” (p. 16). The author hopes that greater attention to the church’s living memory, as preserved in these writings, will encourage a healthier NT discipline otherwise largely fragmented and unsatisfied with yesterday’s historical-critical “assured results.” The author’s thesis is that “the otherwise nebulous figure of Simon Peter assumes an unexpectedly vital role close to the epicenter of Christian origins” (p. xvi).

The author divides his book into three parts, each of which contains two chapters. Part 1, “Peter in Canon and Memory,” introduces the concept of living memory (chapter 1) and provides an overview of the NT portrait of Peter (chapter 2). Part 2, “Peter in the “Living Memory’ of East and West,” which comprises the bulk of the study, sketches Petrine living memory from the late second-century back to the apostolic documents in the Roman imperial East (ch. 3) and West (ch. 4). Here students are introduced to fascinating yet largely unfamiliar figures, such as Serapion of Antioch, Justin Martyr, Ignatius, Dionysius of Corinth, and Clement of Rome. Part 3, “History and Memory—Two Case Studies,” offers two case studies that apply the insights of Petrine living memory to help answer puzzling questions concerning Peter: his conversion (ch. 5) and surprising international missionary career (ch. 6). In both case studies, Bockmuehl seeks to show how “the relationship between the historical Peter of critical reconstruction and the historic Peter of memory” give rise to rich “interwoven strands of tradition and memory” (p. 153).

The book is evidence of a larger recent upsurge of academic interest in early Christian origins and its aftermath, i.e., in its reception or effective history in general (to include the history of the interpretation of biblical texts) and in second-century Christianity in particular. It stands as a genuine contribution to the field. It weds the insights of historical-critical reconstruction of Peter, the NT’s depiction of Peter, and the second-century living memory of Peter into a fascinating and largely convincing portrait. Living memory, among other memories, univocally maintained that Peter died in Rome under Emperor Nero, authored 1 Peter, and cofounded (with Paul) the church at Corinth. Without early living memory, such information would not be available to us or be so strongly attested.

One of the most penetrating observations is the author’s discussion concerning the oft-overlooked statement in John’s Gospel that Peter originated from Bethsaida (not Capernaum, as popularly thought [see John 1:44; pp. 126–27; 165–76]). Located in tetrarch Philip’s Gaulanitis just east of the Jordan River on the Sea of Galilee, the city was predominantly Hellenistic in culture, and Greek would have been the primary language spoken. It is therefore historically probable that Peter grew up bilingual. As a Palestinian Jew from a devout family (cf. Acts 10:14), Peter would have spoken Aramaic. As a Jew dwelling in the Hellenistic city of Bethsaida, however, Peter grew up surrounded by Greek speakers and almost certainly could speak at least “tolerable” Greek. Bockmuehl writes, “His childhood in Bethsaida, a village with little Jewish presence, in which his brother Andrew and close friend Philip were known exclusively by their Greek names, would have ensured his ability to speak tolerable Greek from a young age, even if not perhaps to read or write it” (p. 127).

Bockmuehl connects this to the question of the authorship of 1 Peter, but does not press the point. I suggest, however, that his insight may have significant ramifications for the debate over the authorship of 1 Peter. (As an aside, how else do scholars think that Peter ministered at Corinth and Rome? Do they envision a bilingual Jewish companion as a full-time translator and guide, constantly holding his hand?) Some Western scholars do not seem to be able to envisage a truly bilingual yet uneducated or only modestly educated person. My experience of living in Ethiopia over the past seven years has revealed that uneducated (or modestly educated) bilingual and trilingual speaking ability is a reality in several regions of the country. Furthermore, given the almost certain use of an amanuensis in the composition of 1 Peter (whether Silvanus or not; see 5:12), the argument against Petrine composition (however broadly defined) due to a supposed inability in Greek becomes moot.

Methodologically, Bockmuehl’s decision to divide the material geographically into East and West is serviceable but not the only or even possibly best way to go about the task. Evangelicals will rankle that Bockmuehl thinks it unlikely that the apostle wrote 2 Peter (they will have to wrestle with his formidable argument on pp. 89–91). But the work is a solid, if exploratory, contribution to Christian origins and its subsequent reverberations into the following century. It should also stand as a wake-up call to more than a few within the Protestant Church to stop (mis-)reading the entire NT through Pauline-shaped lenses.