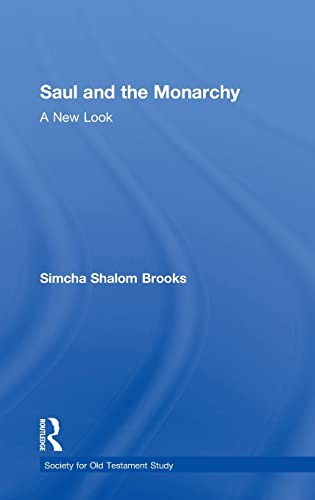 SAUL AND THE MONARCHY: A NEW LOOK

Readers will be aware that the history of Israel is a contested area of Old Testament studies. Simcha Shalom Brooks enters the fray by focusing upon King Saul. Her thesis is that the pro-Davidic slant of the biblical documents has distorted and obfuscated the historical material relating to Israel’s first monarch. Saul and the Monarchy: A New Look aims to construct a more favourable and ‘historical’ narrative that redeems Saul from his canonical and modern detractors.

Shalom Brooks is cognisant of the thorny issues involved in the writing of history and the use of archaeology. Chapter 1 discusses these questions, concluding that the books of Samuel are ‘propaganda created in order both to convince the reader of the legitimacy of David’s claim to the throne, and to absolve David from any responsibility for Saul’s death’ (18). Chapter 2 examines the reason for the emergence of kingship in Israel, with particular reference to the Philistines’ expansion in the region. It is suggested that no single motive, but rather a constellation of internal and external factors, drove Israel to adopt monarchic rule. Chapter 3 dissects the Deuteronomist’s portrayal of Saul. Here may be found some of the more contentious of the book’s hypotheses: Saul did not perpetrate any atrocity against the priests of Nob (1 Sam. 22), nor kill the Gibeonites (2 Sam. 21). In fact, claims Shalom Brooks, there were no historical grounds for the rejection of Saul as king. Chapter 4 looks more closely at the relationship between Saul and David. The contention is that David’s role in Saul’s downfall has been suppressed by Deuteronomistic redactors and that original material relating to their conflict was edited out of the ‘history of David’s rise’ into the book of Judges. Indeed, according to Shalom Brooks, the ‘pro-Saul writer of the Samson story was so enraged with David as to portray him as a Philistine woman and a seducer who pretended to be on the hero’s side yet was really a Philistine agent’ (86). Chapter 5 attends to King Saul’s achievements, highlighting his family pedigree and military prowess. Given the latter, Shalom Brooks suggests it was inconceivable that he could have been taken from behind by the Philistines at the battle of Gilboa (1 Sam. 31) and, therefore that it was David’sarchers who loosed the fatal arrows. Chapter 6 provides material in support of the firm identification of Gibeah with modern Tel el-Ful. On this basis it is proposed that Judges 19–21 is not historical, but later ‘anti-Saulide propaganda’ (137) to explain the sacking of Gibeah. Chapter 7 highlights the far from smooth transition of power from Saul to David, events that form the basis for the schism a generation later. The book contains 17 maps and figures, a bibliography, and author and subject indices.

Shalom Brooks does well to seek out and emphasize material relating to Saul. Whilst it is obvious that David is the central protagonist of 1 and 2 Samuel, however, her rehabilitation of Saul is often based upon arguments from silence or a view of literary composition that enables her to appropriate texts to support her argument in quite extraordinary ways. This reviewer, for example, is not at all convinced that the fact that Samson’s and Saul’s name both begin with S and David’s and Delilah’s with D provides evidence for a hidden history of Saul in Judges 13–16 (cf. 86).

Shalom Brooks recognizes that ‘scholars dealing with ancient Israelite history are aware that no one can expect to have the last word on the matter’ (10), a perspective that should also apply to her own evaluation of Saul and the monarchy.