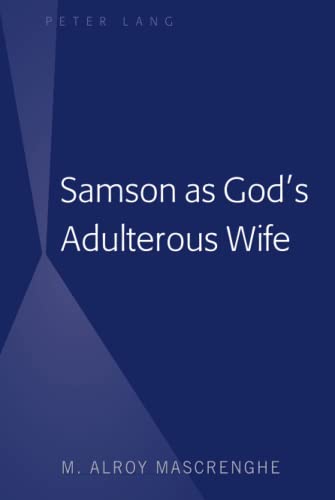 In this slim monograph, M. Alroy Mascrenghe offers a fresh interpretation of the Samson narrative (Judg 13–16), as well as the Levite-concubine narrative (Judg 19), in which he argues that “the motif of God’s adulterous wife is a thread that runs throughout these stories” (pp. 1, 3). To support his thesis, Mascrenghe briefly surveys the motif of God’s adulterous wife through the OT (ch. 3) and compares the Samson story with Ezekiel 16 (ch. 3) and the Levite-concubine story with Hosea (ch. 5). To Mascrenghe, Judges 3:6 with its statement that intermarriage leads to idolatry serves as a framework for reading the Samson and Levite-concubine stories as metaphors for spiritual adultery (pp. 4, 11–12). Within the adultery framework is the element of betrayal, leading to one of Mascrenghe’s most provocative assertions, namely that all Samson’s lovers (including the prostitute at Gaza; 16:1–4) and the concubine betray their men, Samson and the Levite, respectively (p. 4).

The book begins with a brief introduction followed by Mascrenghe’s methodology (ch. 1); after which he seeks to apply his method to Judges 13–16 and 19 (chs. 2–5). Mascrenghe offers a nine-element methodological framework to compare the Judges narratives to the adulterous wife motif of the OT (pp. 26–29). He uses most of these in his analyses of Samson as an adulterous wife (pp. 67–78) and of the concubine (pp. 128–32).

Chapter 3, “Samson as God’s Adulterous Wife,” contains the author’s greatest contributions. Mascrenghe adds new evidence about Samson representing Israel. He persuasively shows that the same cycle of adultery, bondage, crying out and deliverance in the cyclical framework (Judg 2:11–19) is followed in Samson’s narrative (pp. 69–73). In the first set of narratives, Samson enters into a disastrous marital relationship with the Timnite woman and is bound with ropes. In his relationship with Delilah, he is placed in bondage without eyesight. According to Mascrenghe, in all three stories (Timnite, Gaza prostitute, and Delilah) Samson is betrayed by the woman he loved or trusted. Also in chapter 3, the author compares the Samson story with the adulterous-wife metaphor in Ezekiel 16 using five distinct themes: (1) vow-making initiated by God, (2) playing the whore with the passerby, (3) lovers (Samson/Israel) taking the initiative, (4) judgment and humiliation brought by Yahweh, and (5) Yahweh remembering the covenant (pp. 81–89). This chapter is written in a very accessible manner and can aid pastors by offering them a way to view Samson that has wide application for believers.

Although chapter 3 aids readers, the monograph overall would benefit from better organization and focus. For example, chapter 4, “Destruction of the Dagon Temple as a Polemic Against the Philistine Cult,” contains no argumentation about spiritual or physical adultery; it instead relates to the Ark of the Covenant in Dagon’s Temple (pp. 108–10) and Elijah on Mount Carmel (pp. 110–11). Rather than including chapter 4, chapter 3 could have been expanded and divided into two chapters: one that looks at the Samson narrative as a microcosm of the larger cycle and the other that looked at Ezekiel 16.

Most importantly, the author needs more serious and sustained argumentation. Although Mascrenghe is aware of relevant works for his argument, he characteristically does not interact with scholars. For example, his understanding that the prostitute at Gaza was the betrayer hangs on a textual variant with ambiguous grammar. He assumes that she is the one that said, “Samson has come here” (16:2). Rather than requiring the prostitute to be the unstated betrayer of 16:2 (pp. 4, 45, 75), perhaps keeping it ambiguous and following J. Cheryl Exum’s well-accepted interpretation of chapters 14–15 and chapter 16 as serving as symmetric panels would resolve the tension (“Aspects of Symmetry and Balance in the Samson Saga,” JSOT 19 [1981]: 3–29). This would allow one to recognize the cyclical pattern and betrayal motif in the Timnite and Delilah stories. As presented, if one rejects Mascrenghe’s reading of the variant, one rejects much of his claim.

Similarly, the Levite-concubine interpretation rests on another textual variant. Did the concubine “play the harlot” (MT, NASB, NKJV) or “become angry” (LXX, NRSV, NLT, NET)? Mascrenghe is aware of Isabelle Hamley’s recent work that would bolster his case (“What’s Wrong with ‘Playing the Harlot’? The Meaning of זנה in Judges 19:2,” TynBul [2015]: 41–62), but he asserts his view rather than engage meaningfully with the literature (pp. 115, 117, 119, 121). He gives her excellent article a mere footnote, saying “Hamley argues that ‘playing the harlot’ is indeed the most suitable reading” (p. 135 n. 25). Notwithstanding these criticisms, Mascrenghe offers a fresh, creative interpretation of Samson as God’s adulterous wife worthy of consideration and, in key places, adoption. I would like to see Mascrenghe’s future research engage with scholarly literature more and offer deeper exegetical analysis.