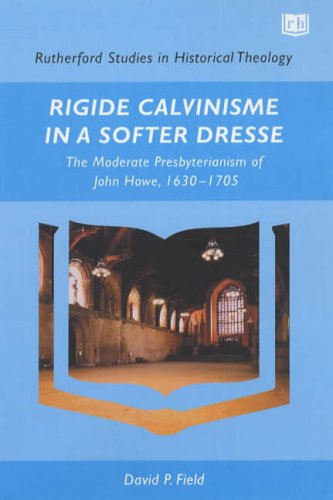 RIGIDE CALVINISME IN A SOFTER DRESSE: THE MODERATE PRESBYTERIANSIM OF JOHN HOWE, 1630–1750

John Howe (1630–1705) is hardly a household name, even in houses lined with Banner of Truth books. Overshadowed by his famous contemporaries, Richard Baxter and John Owen, Howe has been unjustly neglected. In the mid-1990s, however, David Field and Martin Sutherland independently wrote fine PhD dissertations on Howe, which have now been published for a wider audience. Together they provide a thorough analysis of Howe’s thought, and a searching examination of the changing face of Puritanism in the second half of the seventeenth century.

Howe’s career stretched from the 1650s to the early 1700s—he was both a chaplain to Oliver Cromwell and a confidant of William of Orange. Intellectually, he was equally well connected—among his friends were the scientist Robert Boyle, the Cambridge Platonist Henry More, the poet Andrew Marvell, the future Archbishop of Canterbury John Tillotson, and the philosopher John Locke. Both Field and Sutherland excel in placing Howe within his broader intellectual milieu. They show that whilst Howe was concerned to defend Reformed tradition, he was also acutely conscious of the need to modify received ideas in a new ideological context.

Field’s monograph comes with high praise from J. I. Packer and the distinguished historian Neil Keeble, and it lives up to its billing. It argues that Howe, like Baxter, was a representative spokesman of ‘moderate Presbyterianism’. These influential divines steered a ‘middle way’ between high Calvinists and anti-Calvinists, offering ‘what they regarded as a kinder, saner and more eirenic Calvinism’. As Amyraldians, they rejected double predestination and emphasized the universality of Christ’s atonement; as neonomians, they taught a governmental theory of the atonement and emphasized the role of ‘evangelical obedience’ in justification. They distanced themselves from antinomianism, stressed the ‘reasonableness’ of Christianity, and were very reluctant dissenters from the established church.

It would be hard to better Field’s account of Howe’s moderate Calvinist theology, but Martin Sutherland does enrich our understanding of his ecclesiology. For Sutherland, Howe was more than a spokesman for ‘moderate Presbyterianism’. He forged a distinctive ecclesiology quite different to that of Richard Baxter. Whereas Baxter had laid great stress on the ‘visible church’ and on the role of the Christian magistrate, Howe shifted the emphasis to the invisible church and the individual conscience. It was his ecclesiology (not Baxter’s) that was to enjoy ascendancy within eighteenth-century Dissent, as it embraced toleration and abandoned the goal of institutional unity.

The theme of declensions looms large in studies of late seventeenth and early eighteenth-century Protestantism, and it is a preoccupation of both authors. Field emphasizes the sheer force of anti-Calvinism in Restoration England. Although he prefers the stricter Calvinism of Owen and Bunyan, Field helps us to see that Howe’s goal was to salvage Calvinism by softening it. But he suspects that the strategy prepared the way for more liberal theology in the eighteenth century. I wonder myself whether Field underestimates the evangelical Protestantism of the Restoration Church of England—men like Tillotson, John Wilkins and Isaac Barrow may have abandoned Calvinism, but their moralism and rationalism has been exaggerated. Moreover, it is worth remembering that as late as the 1680s, both the Lady Margaret and Regius Chairs of Divinity at Oxford University were occupied by Calvinist theologians.

If Field focuses on the decline of Calvinist theology, Sutherland is interested in the decay of the Dissenting churches. He argues that Howe’s invisibilist ecclesiology bequeathed a troubling legacy—although Howe prized Protestant unity, his failure to emphasize the unity of the visible church opened the way for ‘institutional fragmentation and division’. Once again, one can read the evidence rather differently. Howe’s stress on inward piety, the spiritual unity of believers, charity towards other Christians and a future outpouring of the Spirit would enable Dissenters like Watts and Doddridge to welcome the Evangelical Revival. The ear from 1660 to 1730 tends to get a bad press from church historians, not least evangelicals, but in various ways it prepared the ground for the awakening. Field and Sutherland have made vital contributions to our understanding of this critical age of transition.