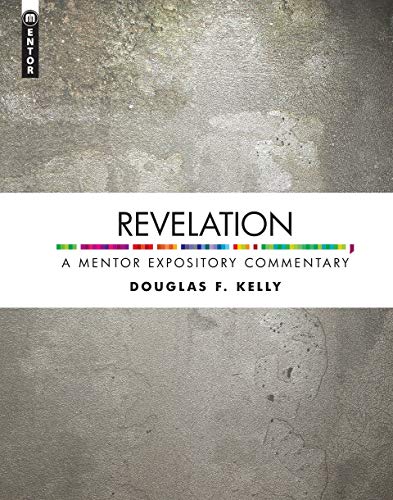 Douglas F. Kelly is Richard Jordan Professor of Theology at Reformed Theological Seminary in Charlotte, North Carolina. His latest book consists of verbatim transcriptions from audio tapes of sixty-five sermons preached at a local Presbyterian church from 2001 to 2003. These sermons become the sixty-five chapters of the book (pp. 15–437) followed by 2 pages of endnotes, a 17-page subject index, and a 5-page Scripture index. The content is effectively double this amount, however, since each page consists of two full columns of text.

The commentary has some notable strengths and weaknesses. First the strengths: Kelly fittingly and repeatedly emphasizes God’s sovereignty over all time and all things. Here his Reformed predilections serve him well given that the theme of Revelation is arguably that God is in control (i.e., on the throne). Related to this, Kelly offers much pastoral wisdom and comfort to those struggling with such things as persecution, suffering, doubt, and unanswered prayer. His own love for the lost and an evangelistic urgency to reach them with the gospel permeate the book. Above all, Christ’s person and work are unswervingly exalted, and many passages incline the reader to pause in gratitude and worship the Savior. Indeed, the book is often quite devotional.

As for weaknesses: The countless Scripture citations (which could have been a potential strength) are in archaic Elizabethan English. (Kelly follows Dean Burgon [1813–1888] in matters text-critical, so it is no surprise that the text he preaches from and exposits is the King James Version [AV].) Kelly follows the KJV uncritically both when it mistranslates and when it blunders textually: e.g., “washed us from our sins” in Rev 1:5 (p. 24); “And I stood” in Rev 13:1 (cf. p. 235); “book of life” in Rev 22:19 (p. 18). The author’s overall approach to the Book of Revelation is preterist, or rather “semi-preterist,” in that he allows (albeit without clear controls or justification) that in addition to describing AD 70 and the events leading up to it, Revelation also (often simultaneously) describes ongoing and/or future realities. The white-horse rider in Rev 6:2, the bowls of wrath, and the fall of “Babylon” all describe Jerusalem and Christ’s first-century coming to it in judgment. Oddly, the sword in Christ’s mouth in Rev 19:15 does not refer to the parousia but to Christ’s salvific conquest of the nations with the gospel during the church age (pp. 363–67). (Given the unquestionable finality and totality of that conquest, one would think Kelly would be a postmillennialist rather than an amillennialist!) Surely, though, this sword was defined otherwise earlier in the book (Rev 2:16), making Kelly’s interpretation impossible. Other questionable and idiosyncratic interpretations abound: e.g., the opening of the “pit” in Rev 9:1–11 (cf. Rev 18:2) took place in AD 66 and released “demons” into the hearts and minds of the unbelieving Jews in Jerusalem; moreover, this is something that God regularly does throughout human history to punish recalcitrant, unbelieving humanity (pp. 169; 173–77; 185–87; cf. 314). The “two witnesses” were John the Baptist and James, or possibly Jesus (pp. 202–3); the Holy Family’s flight to Egypt is mentioned in Rev 12:6 (p. 218); there are countless “trees of life” by the river that flows from God’s throne (pp. 422–23); etc. Ironically, the author’s penchant for finding woodenly literal fulfillments of Revelation’s symbols in the past (e.g., “hailstones” equal Roman catapults) puts him precisely on a par with the literalist dispensationalists he rejects who are equally bent on finding woodenly literal fulfillments in the future. In much of this he is simply following the likes of David Chilton, Gary DeMar, and R. J. Rushdoony, interpreters who are themselves on the fringes of Reformed millenarian and theonomist thought. With but a single exception (i.e., Simon Kistemaker’s commentary), there is no interaction with contemporary scholarship on Revelation in particular or apocalyptic in general. One minor item: all entries in the book’s two indexes are off by two pages due to a minor error in pagination.

Additional preaching resources for Revelation remain a desideratum. Meanwhile, one might wish to peruse Dennis Johnson’s The Triumph of the Lamb, Eugene Peterson’s Reversed Thunder, Darrell Johnson’s Discipleship on the Edge, or N. T. Wright’s recent Revelation for Everyone, in which each section begins with an illustration.