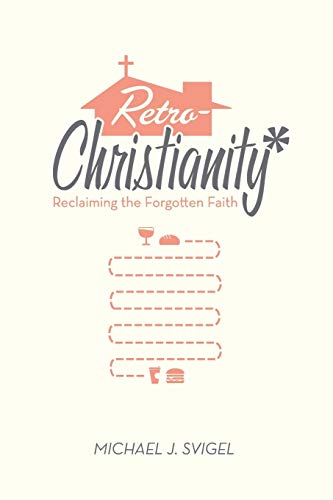 Today there is a readership for literature written by former evangelicals in the “going home to Rome” genre. Whether by Tom Howard (once of Gordon College) or Scott Hahn (once of the PCUSA), such literature functions as an apologetic to convince others to tarry no longer in the threadbare project known as evangelicalism and to embrace instead the “historic church.” A variant of this literature can be called “going home to Antioch.” Writers such Peter Gilquist, Charles Bell, and Frankie Schaeffer identify the Eastern church as the “historic” communion waiting to embrace malnourished evangelicals.

By contrast, Michael Svigel's Retro-Christianity joins a growing body of literature by conservative evangelicals that aims to inform and enrich the evangelical Christianity of today by “drawing down” the legacy of early Christianity. Just in the past five years, there have appeared volumes such as Bryan Litfin's Getting to Know the Church Fathers (Brazos, 2007) and Michael Haykin's Rediscovering the Church Fathers (Crossway, 2011). But even to allude to these volumes is to raise the question of why, following Litfin and Haykin, Svigel has also plowed this furrow.

The answer to this question is twofold. First, Svigel writes with his own particular strand of evangelicalism in mind (independent or “Free Church” evangelicalism). Second, he believes that this strand of evangelicalism is in real danger of disintegrating because it has cut itself off in a myriad of ways from the stream of historic Christianity. Svigel, a Dallas Seminary professor, is an Early Church specialist and is affiliated with an independent Bible Church congregation. He believes that he observes disease spreading in this movement in the form of eccentric ideas and practices taking hold in settings where Bible, theology, and worship are understood in ways disconnected from the larger storyline of Christian history.

Svigel provides several examples of this “drift.” Some are veritably obsessed with secondary eschatological questions across the twentieth century. Some tend to neglect the two ordinances Jesus gave to his church. Svigel describes a pastor who would not administer the Lord's Supper in his congregation in light of his belief that each meal of the day provided an opportunity to “remember Jesus.” He describes numerous churches in which Christian baptism is left quite optional. Rather than allow their pastors to exercise direction and authority, some congregations treat their pastors as “employees” with the real direction of the congregation being vested in board chairmen.

In Svigel's judgment, this drift, this eccentric tendency in modern “independent” evangelicalism, can best be remedied by strong doses of teaching from the church's earliest centuries-especially the immediate post-apostolic late first and early second century. To his very great credit, Svigel not only believes that this “transfusion” of vision and principles from early Christianity to today must be carried out; he also believes that it can come only after patient advocacy. He deserves to be affirmed in this.

This reviewer empathizes with Svigel. Having been raised in this stream of evangelicalism, he remembers clearly how, under the general pursuit of “New Testament Christianity,” there was often displayed the eccentricity and angularity against which Svigel warns. And yet there are reasons for hesitation here.

For one, the Svigel volume does not clearly enough distinguish between post-1900 “independent” American evangelicalism (whose excesses he laments) and the wider Protestant evangelical movement. Of evangelicalism “per se,” he indicates that it is “in bad shape and likely to get worse” (p. 23). Now it may indeed be the problem of the first stream that it is badly out of touch with the historic Christian tradition, mediated across the centuries and in consequence in real danger of eccentricity. But this is not the problem (at least to the same degree) of evangelical Protestantism in the major post-Reformation traditions. Baptists, Presbyterians, Anglicans, Methodists, and Lutherans have had transmitted to them some of the practices and the patterns of early Christianity mediated by their own traditions. The aberrations which Svigel laments are not necessarily the aberrations of older evangelical Protestant groups. So perhaps Svigel has wielded too wide a paintbrush.

Second, if it is indeed the case that historic understandings of the place of creeds, of the ordinances Jesus left to his church, and of the ministry he established live on in the post-Reformation Protestant churches, then it is apparent that correctives to the eccentric ways of independent evangelicalism are a lot nearer to hand than the early Patristic age. They may be within walking distance of the independent evangelical congregations for which Svigel is concerned. So why would not the cure for the eccentricities of independent Christianity begin with greater cross-pollination with longer-established evangelical Protestantism? If there are lessons to be learned from the Anglicans, Methodists, and Presbyterians-well then, on with it!

Third, Svigel's appeal to the Patristic age (and more particularly the late first and second century, his area of expertise) as the necessary cure is itself open to counter-argument. If independent Christianity has too easily supposed that it can maintain NT Christianity with only the NT Scriptures to guide it, how is this equation fundamentally changed by the mere addition of the Didache, the Epistles of Ignatius and Clement, and the Apologies of Justin? Is this not just a recipe for “Book of Acts Christianity 2.0”? Is not what is being proposed just another attempt at Restorationism? One might infer just that from the fact that Svigel regularly prefers the earliest possible dates for these writings, bringing some of them (notably the Didache) into the lifetimes of the apostles. If such documents are contemporary with the apostles, do they not serve as windows into the practices of the apostles? Svigel believes this. Ah, but then there is the uncomfortable fact, acknowledged by Svigel, that these early post-apostolic writings contain some elements that we find hard to square with the sayings of the apostles. An example of this is the over-association, in the apostolic fathers, of water baptism and salvation/regeneration (pp. 237-38).

Svigel deserves our thanks for sounding a caution against the dangers, potential and real, of the independent evangelical Christianity in America that sits too lightly to the biblical interpretation, creeds, and practices of historical Christianity. When one considers that independent Christianity is not only an American, but a proliferating global phenomenon, Svigel's needed cautions are of much wider application than at first appears. The question remains, however, whether the best remedy for this problem is leaping over the many Christian centuries (with scant attention to the Reformation-era re-appropriation of the ideals of early Christianity) and making fresh appropriation of post-Apostolic Christianity. The question of how biblical and Christian teaching have been substantively mediated to us across twenty centuries is the proverbial elephant in the room; it will not go away unrecognized.