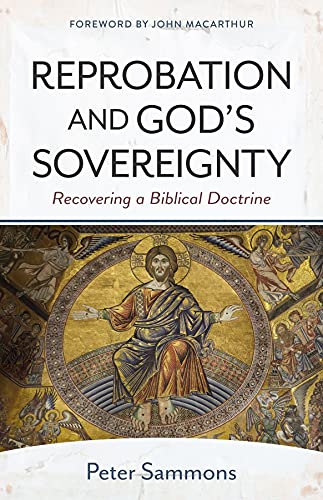 Few topics in theology are as fraught as the subject of reprobation. The doctrine is frowned upon by many Christians, with some even claiming that the teaching depicts God to be more reprehensible than the devil. Even within more “Calvinistic” traditions, many preachers and scholars tend to avoid discussions of reprobation or to drown out the doctrine under a sea of clarifications. Yet, despite the strong aversions of some to the notion of “the awful decree,” others continue to argue that the doctrine is both biblical and morally defensible. Such is Peter Sammons’s argument in his latest book Reprobation and God’s Sovereignty. Sammons is director of academic publications at The Master’s Seminary and previously authored Reprobation: From Augustine to the Synod of Dort: The Historical Development of the Reformed Doctrine of Reprobation (Göttingen: Vandenhoeck & Ruprecht, 2020).

In Reprobation and God’s Sovereignty, Sammons aims to “define, clarify, and explain a biblical view of reprobation against misunderstandings of it by retrieving a proper definition from Scripture and history” (p. 15). Sammons contends that the doctrine of predestination has been misunderstood and wrongly maligned. In particular, critics have failed to understand the doctrine of causality, to which the Reformed tradition has always appealed in order to deny the claim that reprobation makes God the author of sin.

The book opens by surveying important concepts within Reformed theology and by discussing God’s authority to judge human beings for their sins. Afterward, Sammons directs five chapters to the interpretation of Romans 9, which he says is “the longest and possibly most detailed biblical account of the nature of reprobation” (p. 47). Here, Sammons argues that Romans 9 is concerned with the eternal destinies of individuals and that the text stresses the unconditional nature of God’s choice in election and reprobation. After treating Romans 9, Sammons describes the Reformed understanding of negative predestination while exposing mischaracterizations of the doctrine. Sammons posits that reprobation must be understood to have two aspects: the decree and the decree’s execution. According to Sammons, the decree of reprobation involves God’s pretemporal will regarding the eternal destiny of the non-elect, while the decree’s execution involves acts in time that God intends in order to carry out his decree. Moreover, both the decree and its execution are said also to have two elements. Thus, on the one hand, the decree of reprobation consists of God’s decision to pass over the non-elect (preterition) and his decision to hold the reprobate accountable for their sins in accordance with the strict standards of divine justice (predamnation). And on the other hand, the decree’s execution in time involves God’s use of secondary agents in bringing about what he ordained (causality) and the eschatological judgment of the non-elect on the last day for the sins they committed during their lives (condemnation). After defining these various elements, Sammons discusses the doctrines of concurrence and compatibilism before turning to address objections to reprobation. According to Sammons, the most common objections to reprobation are all rooted in a fundamental misunderstanding of the doctrine. As he states, “Many who object to reprobation do so on the basis of a misunderstanding (or misrepresentation) of compatibilism. They often confuse compatibilism with immediate agency, thereby making God the author of sin. This objection generally does not allow for the distinction between primary and secondary causes, which often leads to even more confusion” (p. 175). Sammons then spends the remainder of the book discussing the doctrine of causality because he is convinced that the doctrine “safeguards the integrity of both agents (God and man)” (p. 192).

Sammons has done the church and the academy a service in penning a meticulous and compelling argument in favor of the Reformed doctrine of reprobation. Few writers have been willing to provide such a defense, and so Sammons has ably filled a gap in modern systematic theology. Moreover, Sammons evidences a deep knowledge of Reformed and Evangelical theology, as he skillfully navigates between the works of a number of important thinkers from both traditions. Sammons is also to be commended for his use of both biblical interpretation and theological argumentation in the formulation of his case for reprobation. But while the book exhibits considerable strengths, it is also marred by a few weaknesses. One problem has to do with the uneven quality of Sammons’s writing. Unfortunately, the book contains more typographical errors than usual, and the organization of the materials can be less than clarifying at times. Furthermore, Sammons’s exegetical work is not always convincing. So, for instance, while I was persuaded of his overall argument regarding reprobation in Romans 9, I was unconvinced by several specific exegetical claims, such as his suggestion that the verb κληθήσεται (“he will be named”) in Romans 9:7 refers to God’s effectual call to personal salvation (pp. 49, 60) or his claim that Romans 9:1–5 expresses Paul’s disappointment in the Israelites for their refusal to believe (pp. 51–52). Moreover, Sammons occasionally provides poor translations of the Greek text, as when he states that κατὰ πρόθεσιν κλητοῖς in Romans 8:28 means “the purpose of His calling” (72). Additionally, the book includes some theological statements that are poorly worded or are otherwise questionable. For example, Sammons repeatedly insists that God is the only agent involved in man’s salvation. Such an assertion seems to undermine Sammons’s statements regarding compatibilism and the necessity of faith and repentance. In other words, Sammons could have stressed that God was the decisive agent behind salvation without implying that human beings exercise no agency whatsoever in their salvation; instead, he could have appealed to the doctrine of compatibilism to note how God’s agency is what causes the elect to believe, repent, and persevere in the faith. Sammons is also unpersuasive when he tries to distinguish how the persons of the Trinity are involved in the expression of God’s wrath. According to Sammons, the Father determines the verdict of hell and pours out wrath, the Son “is the clearest judge of hell” (p. 43), while the Holy Spirit heightens the torment of the reprobate by supernaturally ensuring that they recall every good thing they experienced while on earth. On the one hand, Sammons view of the role of the Holy Spirit is highly speculative; on the other hand, the claim that God’s wrath is only poured out exclusively by the Father seems contradicted by texts such as Revelation 6:16–17 and 19:15. Finally, Sammons’s tone is overly polemical: those who object to reprobation are charged with being purposefully obtuse (p. 105) and intellectually dishonest (p. 106), so that they are guilty of promulgating a “heinous misrepresentation” of Reformed teaching (p. 109). At the very least, one wonders whether Sammons seeks to represent his interlocutors in the best possible light. These various shortcomings do detract from the overall effectiveness of the book; nevertheless, anyone interested in the subject of predestination would still greatly benefit from engaging with Sammons’s work.

Richard Blaylock is a PhD candidate in Biblical Theology at the Southern Baptist Theological Seminary in Louisville, Kentucky.