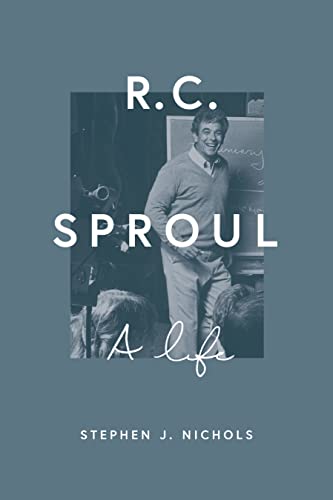 R. C. Sproul kept a card on his desk with the words printed, “You are responsible to preach and to teach what the Bible says, not what you want it to say” (p. 64). That statement marked the Reformed theologian’s life and ministry. The founder of Ligonier ministry, Reformation Bible College, and St. Andrew’s Church, who passed away on December 14, 2017, not only fulfilled this lofty calling but inspired generations to do so as well. R. C. Sproul, A Life offers a dense account of Sproul’s life and ministry, from his beginnings in Pittsburgh to his last days in Sanford, Florida. This book traces his youth, close partnership with his wife Vesta, conversion, seminary and graduate education, and various ministerial pursuits. The biography also recounts his influence on American Evangelicalism as a Reformed pastor, author, professor, college president, and lay teacher. It gives a window into R. C. Sproul’s personal and public life and his unique contributions to theology and Christian living in the modern and postmodern world.

This first full-length biography on R. C. Sproul is appropriately written by the Reformed minister’s successor and close friend, Dr. Stephen J. Nichols. The church historian, who holds a PhD in Apologetics from Westminster Theological Seminary, currently serves as the president of Reformation Bible College and the chief academic officer of Ligonier Ministries. In his position at Ligonier, the author worked closely with R. C. Sproul to actively promote and safeguard the fidelity of the ministry’s mission, vision, and theological values. Like Sproul, Nichols is a prolific author in the Reformed tradition. He has published over twenty books, including Jonathan Edwards: A Guided Tour of His Life and Thought (Phillipsburg, NJ: P&R Publishing, 2001) and (with Eric Brandt) Ancient Word, Changing Worlds: The Doctrine of Scripture in a Modern Age (Wheaton, IL: Crossway, 2009). He also serves as an editor of Crossway’s Theologians on the Christian Life series and hosts the weekly podcast 5 Minutes in Church History.

At the heart of this biography, Nichols reveals R. C. Sproul to be a man consumed with knowing God, particularly his holiness and glory, through the Bible, and he inspired others to do the same. In eleven engaging, partly chronological, partly topical chapters, the author chronicles not only Sproul’s life as a trained theologian and philosopher, including his various academic positions, but also his primary calling as a pastor and teacher of the layperson, like his heroes Martin Luther and Jonathan Edwards. His work at Ligonier Ministry and St. Andrews testifies to this commitment. The author gives us an intimate look at each of these, from their beginnings in his living room to their growth into vast, thriving ministries. Nichols also reveals Sproul’s pivotal role in reintroducing Reformed theology with its focus on the glory of God to the Evangelical church. He did so by clearly articulating the five solas of the Reformation—sola Scriptura, sola fide, sola gratia, solus Christus, and soli Deo gloria—with passion and biblical conviction. As a champion of sola Scriptura, Sproul played a key role in establishing the Chicago Statement on Biblical Inerrancy (1978) and served as the president of the International Council on Biblical Inerrancy. As an advocate of sola fide and sola gratia, he stood against Evangelicals and Catholics Together (ECT) in 1994. While he believed they could be united on social issues, he saw their differences on the doctrine of justification as ultimately divisive. Similarly, he opposed the New Perspective on Paul. He believed that both ECT and the New Perspective challenged truth and the gospel.

In his final chapter entitled “Doxology,” Nichols discusses Sproul’s legacy, remarking, “Depending on when you looked in on R. C.’s life, you might have a different answer as to his contribution to the church and the Christian tradition” (p. 287). In 1978, he focused on the fight for inerrancy, whereas in 1994 and 2016, he championed justification by faith alone. Some remember him for work as a philosopher and others as an apologist and theologian. The author suggests all these emphases are appropriate, coming together in the title “Reformed classical theist” (p. 290). Overall, however, Sproul’s own words regarding the Reformers describe him: “an overwhelming, passionate, soul commitment to the transcendent majesty of God. That was the message that captivated me. That is what I have wanted to communicate through my teaching and through my writing more than anything else” (p. 295). Nichols attests to this commitment through examining the details, writings, relationships, theological emphases, and ministries of R. C. Sproul.

Nichols’s work is unique in its intimate portrayal of the man behind the doctrine, sharing a perspective that only a friend can give. For instance, the author gives insight into his captivating personality, devoted partnership with his wife Vesta, love of sports, dedication to being a life-long learner (as seen in taking up the violin in his 60s), and his close friendships with people such James Boice (even reproducing in full a letter R. C. wrote to him when Boice was diagnosed with an aggressive form of liver cancer).

It may be more appropriate to consider it a tribute to R. C. Sproul than a critical biography. While it is well-researched, including details from interviews with his wife and even what he ate at the ICBI Council meeting, Nichols primarily focuses on Sproul’s strengths, minimizing his weaknesses or missteps. For instance, in chapter 6, he gives a biased account of Sproul’s critique in Classical Apologetics of Van Til’s presuppositional apologetics. Furthermore, he minimizes the suspension and departure of his son R. C. Sproul Jr. from Ligonier Ministries due to moral failures. For a more critical look at Sproul, we will have to wait for Nate Pickowicz’s forthcoming biography, R. C. Sproul, The Defender of the Reformed Faith. At times this work is a bit choppy and redundant, with some minor editorial errors. Toward the end, it moves from a chronological account to being more topical.

Overall, any fan of R. C. Sproul or proponent of Reformed theology will appreciate this narrative. The appendixes are a particular treasure, having Sproul’s last two sermons and lists of his books, booklet series, lectures, teaching series, and selected sermon titles, as well as thorough indexes. I believe that Sproul would love to have had these final sermons be the centerpiece of his legacy since they truly encapsulate his life’s work—to promote the knowledge and worship of a holy God.