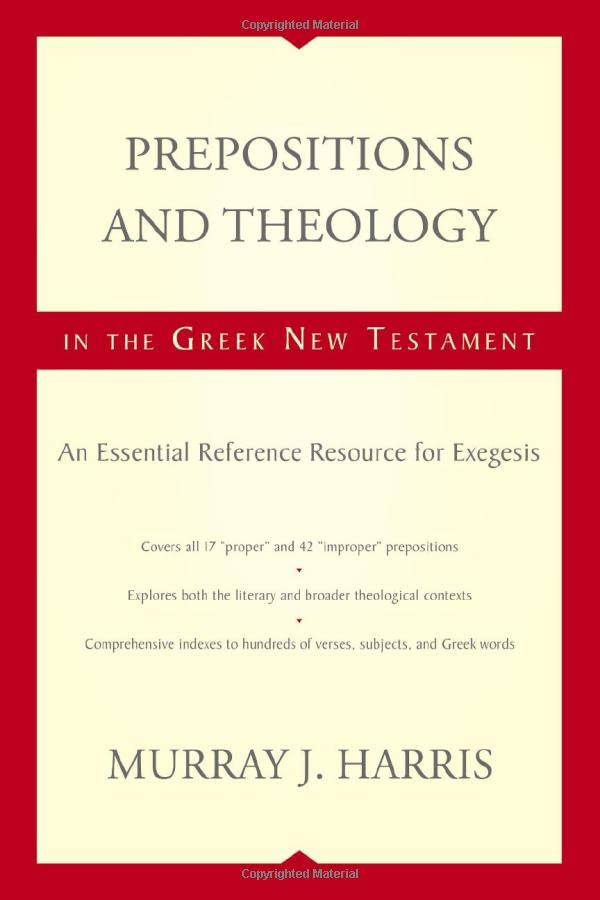 Prepositions and Theology in the Greek New Testament: An Essential Reference Resource for Exegesis

“People seem never to have taken prepositions seriously” (Ray Jackendoff, “The Base Rules for Prepositional Phrases,” in A Festschrift for Morris Halle [New York: Holt, Rinehart and Winston, 1973], 345). This often cited quote from Jackendoff was true of Koine Greek until the recent publications of Constantine Campbell’s Paul and Union with Christ and Murray Harris’s Prepositions and Theology in the Greek New Testament. While both volumes advance our understanding of prepositions in the NT, they are quite different in scope and nature. Campbell focuses on how prepositional phrases that involve Christ (with Christ, in Christ, etc.) shed light on our mysterious union with Christ. Harris’s work is much broader in scope and nature. This review focuses on Harris’s contribution. [Editor’s note: See Mark Seifrid’s review of Paul and Union with Christ in this edition of Themelios.]

Prepositions and Theology evidences the love and dedication that Murray Harris has for the original language of the NT. As he states in the preface, the current work revises and expands his appendix in volume 3 of The New International Dictionary of New Testament Theology, “Prepositions and Theology in the Greek New Testament” (3:1171–1215). Like that appendix, this book serves two primary purposes: (1) surveys the prepositions in the NT and (2) explores particular passages where “prepositions contribute significantly to the theological meaning of the text” (13).

The first three chapters lay the methodological framework to this work. The first chapter introduces the reader to the study of prepositions. Chapter 2 explores the increased frequency in use of prepositions during the period of the NT and possible Semitic influences, and chapter 3 details five exegetical dangers to avoid when interpreting a prepositional phrase.

The lion’s share of this book (pp. 45–223) is dedicated to a discussion of the seventeen proper prepositions found in the NT. Each preposition is given its own chapter that opens with a brief description of the preposition’s meaning, its history of use, and its relationship to other prepositions that may share some of the same semantic range. This is followed by the main ways in which that preposition is used in the biblical text. If you are familiar with BDAG’s system of classification or Wallace’s Greek Grammar Beyond the Basics, then you will find Harris’s system of classification very familiar.

When considering the various uses of the prepositions, extended discussions are given to texts in which a particular preposition plays a significant role in how we read and interpret that passage. This is where the phrase “and Theology” in the title comes in. These condensed exegetical explorations often cover far more ground than the contribution a preposition may be making. In a text that attempts to cover as much territory as this one does, it is easy to find instances where you may not agree with his take on a passage. However, I find this one of the strengths of the book. Harris’s attention to the exegetical significance of each preposition kindles your thought about how these tiny words can have such a huge impact on the meaning of a verse. These sections afford the reader a condensed glimpse into the thoughts of how a senior scholar reads and interprets the text in its original language. Most chapters close with a short discussion of the use of that preposition in compound forms (prefixed to nouns and verbs).

Chapters 21 and 22 examine the use of prepositions in constructions with the verbs βαπτίζω (baptize) and πιστεύω (believe) and with the noun πίστις (faith). Since prepositions by definition are small words that create relationships between other words within a sentence, they form constructions, some of which are more frequently employed than others. These two chapters are an excellent example of how the NT authors frequently employ these constructions and of the particular meanings these constructions convey. I found myself wanting more, wishing that he had also included chapters on the verbs περιπατέω (walk) and μένω (remain, live; c.f. pp. 134–36) as well. In regard to the use of prepositions with Χριστός, we have Constantine Campbell’s recent work (Paul and Union with Christ) that more than fleshes out the meaning and theological significance of these prepositional constructions in much greater detail.

In order to situate this book among recent studies published on the grammar of Koine Greek, I would like to make an analogy to recent studies on the Greek verb system. Most of the grammars published for the past 100 or so years have approached the Greek verbal system from an Aktionsart perspective. However, for the past 30 years a number of scholars have turned to linguistic approaches that take a verbal-aspect approach (Campbell, Fanning, Porter, etc.). Harris’s book finds its home in the traditional approaches to Greek grammar. This is rather surprising given that he cites Piertro Bortone’s recent linguistic study Greek Prepositions from Antiquity to the Present in almost every chapter. It would have been great to see a more thorough incorporation of Bortone’s methodological approach and analysis by Murray Harris. This is not so much a weakness of Harris’s work but more of a hole in our current understanding of the Greek text of the NT that calls for further work.

This is not a difficult book to recommend, but the difficulty comes “how” to recommend it. On the one hand, the material on the meaning and classification of the prepositions is clearly a Greek reference book. On the other hand, the exegetical discussions don’t seem to fall neatly into a single category. Despite the dual nature of this book, it thoroughly surveys the meaning of the various prepositions and presents short exegetical studies that examine the theological significance of those little words that demand serious attention.