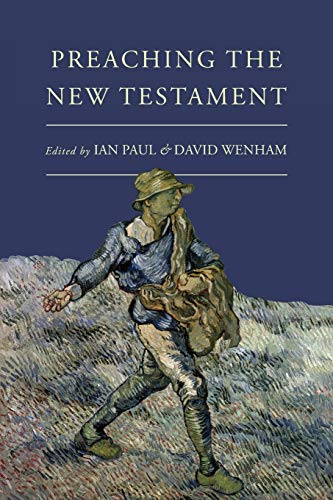 Preaching the New Testament is a set of seventeen articles from an international (mostly European) slate of scholars discussing the task of preaching the various books of the NT. This volume of essays originated out of a meeting of the New Testament Group of the Tyndale Fellowship for Biblical and Theological Research held in July 2011. In the introduction, the editors assert that this book was written out of the conviction that “preaching matters” (p. 13). Yet, they add, this is not a book on technique or persuasive communication. Instead, it is a book by “New Testament scholars who are also preachers, sharing some insights about how to interpret and communicate the New Testament today” (p. 15). With the hope of offering a succinct review of a book that includes eighteen different authors, I have divided the book into three sections, at what seems to be natural divisions (though the editors did not divide the book up into parts), and have offered descriptions of the sections, homing in along the way on a few specific articles or points that were of particular interest.

The first five chapters take up the challenge of preaching the Gospels. The opening chapter (D. A. Carson) overviews preaching the Gospels in general and then chapters 2 through 5 (R. T. France, Klyne Snodgrass, Stephen I. Wright, and David Wenham) each discuss how to preach particular types of stories and micro-genres within the Gospels. For me, these opening five chapters are undoubtedly the highlight of this volume. Carson’s article, full of practical advice and insights for the preacher, is alone worth the price of admission. To name just one of his points, Carson encourages the preacher to be willing to select larger sections of the Gospels for his sermon and explains the value in this, an important reminder for the expositor who at times might be guilty of preaching about the trees but never getting to the forest. Moreover, the editors’ note that the article on the infancy narratives was likely the last publication in which R. T. France—former Principal and New Testament Tutor at Wycliffe Hall, Oxford—wrote before his death. Using the “Christmas Story” as an example, France’s discussion on how to deal with historical matters helpfully encourages pastoral sensitivity to the congregation’s level of sophistication, yet at the same time calls preachers to avoid always skirting difficult historical questions.

Chapters 6 through 11—beginning with Acts and closing with the book of Revelation—discuss how to approach preaching particular NT books (Christoph Stenschke, Justin K. Hardin, Jason Maston, I. Horward Marshall, Charles A. Anderson, Mariam J. Kamell, and Ian Paul). Perhaps the most beneficial portion of these chapters are the times when the authors point out the unique hermeneutical challenges and opportunities that arise when preaching particular books or corpuses and the test cases of how particular passages might be preached. For instance, Justin K. Hardin and Jason Maston offer a brief theory of interpretation that leads to the use of 1 Cor 1–4 as a test case for how one might preach the Apostle’s letters. I. H. Marshall takes a similar approach as he closes his essay with examples from the book of Titus.

The final six chapters are on a range of subjects related to preaching the NT: archaeology and history (Peter Oakes), ethics (John Nolland), hope and judgment (Stephen Travis), the hermeneutics of relationship (William Olhausen), engaging the “New Homiletic” (Helge Stadelmann), and preaching the gospel from the Gospels (Paul Weston). While these articles contain many true and important points, some of the essays in this section will likely feel a bit cumbersome and less practical to many preachers. For instance, however beneficial an understanding of “the hermeneutics of relationships” or “engaging with the ‘New Homiletic’” might seem to the scholar, I can’t help but think that most preachers will fail to find them as valuable.

At various places readers will likely find ancillary points with which they disagree. For example, some of the readers of Themelios will question openness toward the view that the Pastoral Epistles were written by someone other than Paul and to someone other than Timothy and Titus (p. 118). And even more significant to the book’s main agenda, many readers will object to the answer of “not necessarily” to the question of “whether one should always preach explicitly about the cross in gospel sermons” (p. 252). Yet the benefit of this book is that scholars with different backgrounds, approaches, and theology have come together for a common purpose, and the points that will be met with disapproval by some readers do not detract from this volume helping to bridge the gap between the academy and the pulpit. While some of the articles were no doubt more successful in building this bridge than others, the attempt to facilitate more discussion between scholars and preachers is a noble one. In the future, I will return to Preaching the New Testament as a “kick-start” when preparing for a new sermon series on a particular NT book, and I would suggest other pastors consider using this book in a similar way.