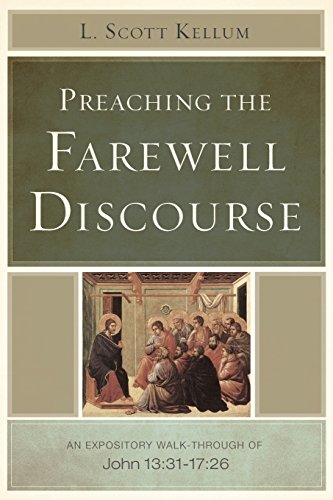 Preaching the Farewell Discourse: An Expository Walk-Through of John 13:31–17:26

Occasionally an evangelical will produce a work with strong exegetical methods that also models the mechanics of preaching passages based upon these methods. Allen Ross’s commentaries on Genesis and Leviticus fall within this paradigm, as well as many works of Walter Kaiser that illustrate the philosophy introduced in his Toward an Exegetical Theology (Grand Rapids: Baker, 1998). Such volumes are valuable to pastoral ministry, for other congregational demands pose challenges that can tempt the shepherd to short-cut detailed exegetical work, eventually dumbing down the hard work of interpreting the text in crafting sermons.

It is therefore refreshing to find a NT scholar offering a text that intends to help the expositor of Scripture utilize exegetical and linguistic analysis to prepare sermons from the NT canon. Especially delightful is that the effort put forth focuses on narrative and discourse within one of the Gospels rather than the epistles. Scott Kellum’s Preaching the Farewell Discourse is a unique text. It draws from the fruit of the author’s doctoral dissertation, published as The Unity of the Farewell Discourse: The Literary Integrity of John 13:31–16:33 (JSNTSup 256; London: T&T Clark, 2005).

It is evident that Kellum is text-driven rather than reader-oriented in his approach. He criticizes Gadamer’s ideas, offering preachers reasons to reject postmodern literary theory: “God (the Who) inspired the Word of God (the What) to communicate to human begins (revelation). The idea of an autonomous text and the lack of propositional truth that accompany many versions of it fly in the face of the doctrine of revelation (which is why we must preach and teach the Bible in the first place)” (p. 14).

Highly beneficial to the reader are Kellum’s sermon sketches. Within each subunit, the writer gives an introduction for a potential sermon on the pericope, proposes a detailed outline, inserts suggested illustrations, and provides a conclusion. For those who initially might find Kellum’s discourse analysis to be too sophisticated or time-consuming for weekly exposition, the sketches go a long way toward ameliorating such skepticism.

As preachers think through Kellum’s examples for their own preparation, they should consider that his MIT’s do not generally reflect the tone of the passages. Admittedly, evangelicals generally lack a consistent method of interpreting Biblical narrative while also considering tone. (Kaiser, as cited above, remains a great exception.) I was hopeful of something different from Kellum. However, two examples will suffice to support this criticism.

The author’s MIT for John 13:31–38 is, “As Jesus’ death approached, he prepared his disciples for life after his departure” (p. 85). Yet the passage denies the disciples the ability to do what Jesus will do shortly after their discussion (“You cannot come” in 13:33 and 36, and “now” versus “afterward” in 13:36). Jesus gives the command to love and the rebuke of Peter in contrast to the denials. The entire exchange comes within the nearer pronouncement of God glorifying himself (13:31–33), not simply within the broader context of preparing disciples (13:1–17:26). Once the reader adds that tone, he can discern that the central idea of the passage is “God’s glorifying of Jesus and the Father.” This idea will yield an MIT of, “God’s glorifying of Jesus and the Father denies the disciples their desires to seek him and to lay down their lives for him, but instead calls them to love one another.”

In this MIT, God glorifies himself alone as Jesus goes to the cross, the unbelieving Jews are excluded from coming to Christ, the disciples love one another (as opposed to going to the Cross), and Jesus sacrifices his life for the disciples (as opposed to one of them laying down a life for Jesus).

For John 17, Kellum’s MIT is, “Jesus prayed for the disciples’ protection, unity, and mission.” However, this intercessory prayer begins with a request to glorify the Son that rests on the completed work of Christ in election (17:2, 6). The MIT’s main idea is “Jesus’ intercession for the elect”; the predicate of the MIT is “intends the sanctification and unity of the believers, based on the faithful work of the Son.” By recognizing the tone of the passage, the MIM will reflect the passage’s focus on Christ’s work—“Jesus’ intercession for the church,” rather than Kellum’s focus on believers’ works—“Christians should be . . . committed to their unity” (p. 322). It seems that a lack of consideration of tone might explain also the writer’s removal of 14:1 from the exposition of the subunit of 14:2–4, and the divorcing of 14:28–31 and 16:3 from the units immediately preceding them.

These small criticisms notwithstanding, Preaching the Farewell Discourse is a solid resource that is highly recommended for homiletics courses and text-driven expositors of Scripture. Kellum is to be commended for a useful effort that will bring much fruit for the kingdom of God.