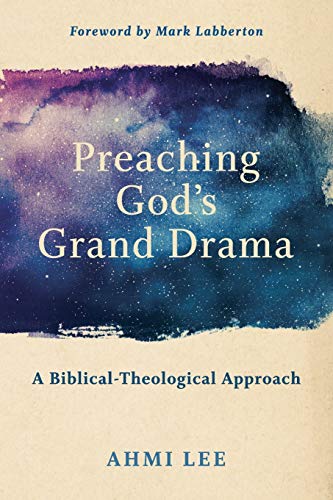 The German theologian Helmut Thielicke is reported to have once said, “The gospel must be preached afresh and told in new ways to every generation, since every generation has its own unique questions. The gospel must constantly be forwarded to a new address, because the recipient is repeatedly changing his place of residence.” In Preaching God’s Grand Drama, Ahmi Lee employs such a mindset as she surveys the major modern and post-modern interpretive methodological approaches to hermeneutics and their subsequent relationship to homiletics. Lee’s goal, however, is not simply to provide a comparison of a modern and postmodern approaches to preaching, but to offer a new and fresh model of biblical-theological engagement.

Lee’s purpose in writing the book is lucid. In her introduction she explains that her aim is “first, to describe and critique the two homiletical approaches that correspond to the present shift in epistemology; and second, given the pernicious contrariety of these models, to propose a centered third approach that builds on both their strengths” (p. 3). Based on this goal, the book can be broken down into two major sections. In chapters 1–3, Lee provides a lay of the land in regard to previous approaches to preaching, before moving into chapter 4–6 where she offers her contribution to the discussion of preaching methodology.

In the first half of the book Lee provides an overview and critique of the two major approaches to homiletics within the last century. Chapter 1 surveys what she describes at the “Traditional Homiletic.” This method of preaching seeks as its goal to “mine” the text for truth and then proclaim it. This approach is largely proposition-based and appeals to the modern reader. In chapter 2, Lee provides a contrast to the Traditional Homiletic by looking at the largely postmodern approaches to preaching of Lucy Rose, John McClure, and O. Wesley Allen Jr. who represent a “Conversational” or “New Homiletic.” The Conversational Homiletic places emphasis on the communal reading of the text and is characterized by the sharing of truth through story, poem, and common experience.

In the second half of the book, Lee presents her own vision of preaching, which she describes as the “Theodramatic Homiletic.” In chapter 4, following the interpretive lead of other theologians like N. T. Wright, Nicholas Lash, and Kevin Vanhoozer, Lee seeks to integrate the objective strength or “epic” of the Traditional Homiletic with the subjective strength or “lyric” of the New Homiletic. The shape of this model is then developed in chapter 5. Lee writes,

Scripture provides the directions for the church’s “live-action” in the continuing drama of redemption that God graciously invites us to participate in. So our concern in preaching should not be strictly epic oriented because sermons should do more than accurately report God’s historical actions … at the same time, sermons should not be purely lyrical because affections stirred by personal and communal experiences are not an end in themselves…. We need both epic and lyric in order to perfectly perform the biblical drama that makes God’s grace and truth known to the world. (p. 109)

There are numerous strengths to Lee’s work in Preaching God’s Drama. First, by revisiting homiletic method Lee has sought to engage a discipline that has often grown stagnant. Frequently, “Traditional” and “New” homiletic models speak straight passed each other, or simply deny other views exists. By addressing the relative strengths and weaknesses of each approach and by presenting an integrated view Lee genuinely forges new ground in the homiletic dialogue. Moreover, Lee does so with a humble tone that avoids pejorative caricatures that have often been present in the works of others. Such an irenic contribution in the field of homiletics should be warmly welcomed. Second, the book itself has a structural logic and coherence that enables the reader to easily follow the author’s argument. The book is clearly laid out and written in such a way that the second section builds naturally upon the first. Though there is technical depth, the flow of the book is easy to follow. Third, Lee’s work is highly nuanced. The engagement with the “New Homiletic,” for example, is thorough without being longwinded, judicious without being pretentious. Lee has clearly thought through questions of method and has provided a careful and balanced assessment of the issues in the book. This is to the reader’s benefit.

As for the book’s shortcomings, I would highlight two. First, while the book contains excellent material it may be out of reach to everyday preachers. There is an academic feel to the book which, though helpful, could potentially rule out those who most need to hear it. The book feels as though it would be more suited to those teaching and training preachers in the classroom, than being helpful to those in existing preaching ministries. Second, while not a weakness per se, the book contains a little more about the methodological disposition one should have in coming to the task, than it does about concrete ways of applying skills to preaching. A sample sermon or other examples of what this looks like in the pulpit might have strengthened the book.

Ahmi Lee has provided a helpful contribution to the ongoing conversation between hermeneutics and homiletics. Preaching God’s Grand Drama reminds the reader of the importance of appropriating God’s timeless truth to our timebound cultural contexts as we participate in God’s unfolding plan.