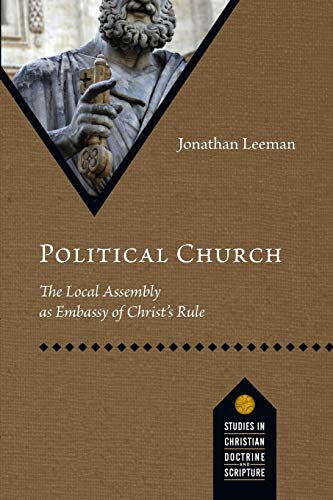 Political Church: The Local Assembly as Embassy of Christ’s Rule

At the writing of this review, the USA is currently in between the summer nominating conventions of its two main political parties. Many Christians, including some well-known evangelical personalities, have been weighing in on the relationship between faith and politics for many months. Some of these voices are more thoughtful than others, of course, and no doubt such prognostications will continue long past the election this fall. Considering this cultural context, Jonathan Leeman’s new book Political Church: The Local Assembly as Embassy of Christ’s Rule is a particularly timely contribution to IVP Academic’s new series, Studies in Doctrine and Scripture. Leeman, editorial director of 9 Marks Ministries and an elder at Capitol Hill Baptist Church in Washington, DC, offers a sophisticated contribution to evangelical ecclesiology and political theology that hopefully will influence how the faith and politics discussion takes shape in the coming years.

Leeman states his two goals in his preface. First, he wants to “replace the map of politics and religion that many Christians have been using since the democratic revolutions of the eighteenth century with a more biblical one.” Second, he aims to “explain where the local church fits onto this redrawn map as a political institution or embassy of Christ’s rule” (p. 13). Rather than relying on political theory to shape how believers construe the relationship between church and state, Leeman calls for a more robustly theological approach to this issue. For Leeman, the local church is an inherently political assembly. “Indeed, the church is a kind of embassy, only it represents a kingdom of even greater political consequence to the nations and their governors. And this embassy represents a kingdom not from across geographic space but from across eschatological time” (p. 22).

Leeman makes his case over the course of six sometimes-lengthy chapters. He rejects modern liberalism’s understanding of politics, especially insofar as many political theorists argue for religious liberty as a natural right grounded in freedom of conscience and/or advocate a divide between the public secular sphere and the internal, more personal sacred realm. He opts instead for a more theological understanding of religious freedom that rejects religious neutrality on the grounds that all of life is inherently religious. Leeman also enters into scholarly debates about the nature of institutions and advocates what might be characterized as a theocentric institutional interpretation of the church as a political body endowed with dominical authority over its constituent members. Though a Baptist theologian, Leeman’s reframing of religious liberty is a departure from dominant Baptist views. However, his rejection of modernity—which seems correct to this reviewer—should lead to a necessarily less philosophical and more explicitly theological conception of religious liberty, even among traditions, like Baptists, that have leaned heavily (at least in America) on Enlightenment accounts of conscience and neutrality as allies in articulating religious liberty and church-state separation.

Leeman leans heavily upon biblical theology to argue for the kingship of Christ over all creation, the place of the fall and redemption in reasserting Christ’s political rule over his church, and the dynamics of church membership. He draws upon Oliver O’Donovan’s political theology (which Leeman summarizes as a “two ages” approach [p. 274]) and Gordon McConville’s work on Old Testament political theology, while critiquing Kuyperianism as too ambiguous in how it relates institutional thinking to ecclesiology and two kingdom theology for being too quick to separate the sacred and secular realms in a way Scripture does not. (The latter in this way is often a religious ally of secular modernity.) He leans heavily upon a covenantal understanding of the biblical narrative, a Reformational affirmation of justification by faith alone, and a Free Church (or baptistic) understanding of local church ecclesiology. The end result is a constructive reframing of well-worn Protestant and evangelical concepts such as kingdom, covenant, and church.

Readers familiar with Leeman’s other scholarly and popular writings on church membership, discipline, and polity will recognize many familiar themes in the latter chapters, and especially chapter six, which at almost 100 pages could have been published as a separate monograph with only minimal editing. Like earlier Protestants, but unlike most contemporary evangelicals, Leeman suggests the local church is the primary arena of God’s present rule and an eschatological microcosm of his universal rule. Politically speaking, the keys to Christ’s kingdom have been entrusted to the church and are exercised through the will of the members, under the leadership of its officers, in submission to Christ’s ultimate will as revealed in Scripture. In this way, the local church is the embassy of Christ’s rule, recognizing citizens of Christ’s kingdom, exercising oversight over their citizenship, and pronouncing judgments that will be fully realized at the final consummation of the kingdom at the end of the age.

There is much more that could be said about Political Church; it is a work deserving of a review essay rather than a short review of this kind. Various readers will doubtless push back on some of Leeman’s interpretations. His anti-modern stance (and its ramifications for religious liberty discussions) will trouble some evangelicals and especially some of his fellow Baptists. Those who embrace other ecclesial traditions will rebuff his congregationalist polity. Dispensationalists will reject his covenantal reading of biblical theology outright while covenant theologians will criticize his resonance (at least at certain points) with a “progressive covenantal” view. Leeman’s reliance on institutional theory will certainly challenge those who downplay polity and wider debates about faith and order. However, even for those who disagree with Leeman on certain particulars will hopefully find much to appreciate. Baptists and other Free Church evangelicals should welcome an ecclesiological work that is constructive and grounded in biblical theology rather than primarily apologetic and reliant on isolated proof-texts. Leeman likely did not set out to make a contribution to debates about Baptist theological identity, but he has most certainly done so.

Regardless of one’s level of agreement with Leeman’s various arguments, most will agree he has provided a helpful starting place for some needed scholarly discussions about topics such as the royal priesthood, religious liberty, the relationship between the church and its surrounding culture(s), ecclesial authority, and evangelical political engagement. Political Church is a signal contribution that should provide grist for the scholarly mills of evangelicals and others interested in ecclesiology, political theology, and related topics. Highly recommended.