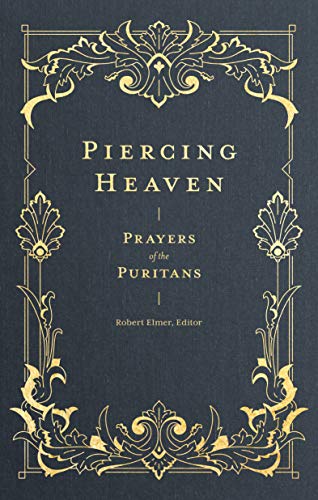 Piercing Heaven: Prayers of the Puritans

Nearly forty-five years since the first appearance of The Valley of Vision, a collection of Puritan prayers that has been reprinted over a dozen times, Lexham Press has published a new anthology of Puritan devotion: Piercing Heaven: Prayers of the Puritans. The book contains over two-hundred prayers from the past, “edited and compiled from sermons and original writings” of the Puritans and those their spiritual tradition (p. 2). Having spent the better part of twenty years as a novelist of historical fiction, editor Robert Elmer hopes this work will portray the “authors” as real people who, despite their different contexts and styles of speech, are remarkably accessible for Christians today. Though not a prayer manual per se, the book offers a healthy balance of laments, praises, supplications, and confessions that can equip an aspiring reader to “pray like a Puritan” (p. 1).

Elmer argues that the Puritans were “neither casual nor perfunctory” in prayer but devoted and humble as they drew deep from the wells of God’s sovereign care as revealed in Scripture (p. 1). Indeed, filled with awe and love, they prayed God’s own words back to him (p. 4). To help the modern reader, Elmer has updated the language of these prayers to remove any “barrier between their understanding of God, and ours” (p. 1). Often, words spoken in treatises about God are reformatted on these pages to the second-person to make the personal address of a prayer. Like The Valley of Vision, each page is fitted with a title for the prayer but, unlike the older book, also lists the Puritan who penned it.

The presentation of the material in Piercing Heaven is certainly one of the book’s best features. Elmer has divided the book thematically into sixteen chapters, including as many as thirty-six prayers in a chapter and as few as five. The divisions range from “Help Me Begin the Day” to “Help Me Close the Day,” from “Forgive My Sins” to “Help Me Rest in God’s Love.” On average, the prayers are shorter and more manageable than those in The Valley of Vision. The modernized English is an improvement, too. The authors themselves are diverse, too. There are some who boasted distinguished careers, like Bayly and Owen, others who did not, such as Bunyan, and still more who lived over a century after these. Perhaps in light of this variety, Elmer appended to the end of the book a list of small biographical paragraphs for each author to provide a general frame for their context (pp. 301–9). Elmer also includes a helpful searchable index (pp. 311–13).

Readers also may appreciate the specificity of selections within each chapter. For example, chapter 4 (“Suffering”) includes a prayer entitled “Prayer For a Dying Father,” and chapter 14 (“Help Me Live the Day”) has “A Midday Prayer for Perspective.” But the chapter selections themselves deserve a further word. Readers may recall that the first two chapters of The Valley of Vision are dedicated to the doctrines of the Trinity and redemption, respectively. This is not the case with Piercing Heaven. There are no properly theological sections. Rather, chapters stress the experience of theology—the personal interaction with divine attributes and the Spirit-initiated application of divine works. Resting in God’s love (ch. 6), for instance, contains prayers highlighting divine condescension (p. 89), covenantal favor (pp. 91–92), and sovereignty (p. 98). Likewise, prayers accenting God’s holiness (p. 240), the work of creation (p. 245), and Christ’s ascension (p. 226) are each cataloged as prayers giving praise and thanks to God (ch. 12). It seems that whatever chapter one determines best to pick up and read, it will likely afford him a sense of the well-blended theological material the Puritans applied to life’s situations.

Of course, not every author here was a Puritan. And, while Elmer acknowledges this right away (p. 5), the representation of those more commonly known as “Puritans” compared to those who are not is somewhat odd. Octavius Winslow (1808–1878), Robert Hawker (1753–1827), and George Whitfield (1714–1770) are included, but there is nothing from Perkins, Hooker, Goodwin, Flavel, or Manton. The skewed distribution of material between authors is also surprising. Among those with the most entries are Hawker (54), Doddridge (38), and Henry (14). Owen, however, has only one prayer in the book, and it spans just five lines!

His inclusion, though, does also shed light on what may have been a pragmatic, and perhaps hurried, editorial process. There is nothing drawn from Owen’s other eight million published words—not even from his Discourse of the Work of the Holy Spirit in Prayer (1682). Thomas Brooks’s The Mute Christian (1659) make up his two entries, but at the exclusion of his 1665 work on prayer, The Price Key of Heaven. It may be no surprise, then, that of Hawker’s fifty-four prayers, each came from a single published work.

Despite these critiques, Elmer’s editing has provided readers with a fresh, accessible, and applicable collection that every praying person ought to keep nearby.