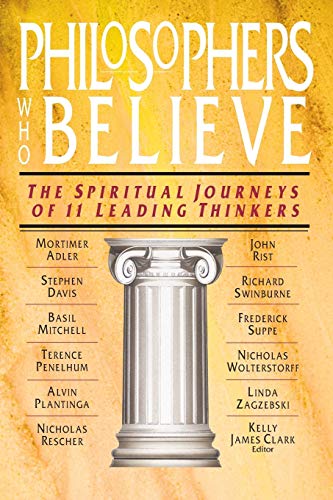 Philosophers Who Believe: The Spiritual Journeys of 11 Leading Thinkers

In the last 15 years or so, something remarkable—many would say providential—has transpired in the academy. Increasing numbers of Christians are entering the discipline of professional philosophy, are doing philosophy well, and are being recognized as such by their peers. This resurgence of Christians in philosophy is reflected in the spiritual testimonies of the philosophers represented in this book. Now that a God-denying logical positivism or scientism has been itself banished as self-refuting (the statement ‘only through science can we know reality’ is itself not a statement of or derivable by science), and naturalism has loosened its philosophical stranglehold, the Christian voice in philosophy is again being articulated, heard, and heeded.

The editor of this collection, Kelly James Clark, provides a helpful introduction that reflects both on the rise of Christians in philosophy after decades of banishment, dismissal and neglect, and on the nature of ‘the literature of confession’, a style of writing unfamiliar to almost all the authors and one in which some of them participate only hesitantly. The character and quality of these philosophical testimonies vary greatly. Most of the essays are largely autobiographical with some discussion of philosophical issues along the way. Other essays, particularly Richard Swinburne’s, are more philosophical with little autobiography. The authors also differ considerably on the nature of the Christian faith.

Several authors are Roman Catholic or fairly liberal Protestants and so have a different understanding of biblical authority and saving grace than do the evangelical contributors. (One author denies both the historical fall and the literal ascension of Christ.) Frederick Suppe’s long essay, which chronicles his struggle with homosexuality and the Roman Catholic Church, will likely disturb many evangelicals (as it did me) because of the excessive attention paid to unsavoury parts of Suppe’s private life, the crudity of some of its language, and his sadly unbiblical understanding of grace as something to be won through enduring effort.

Mortimer Adler’s essay is a fascinating account of his wide-ranging and long-lasting philosophical endeavours as a ‘pagan Thomist’, as well as an account of his recent crisis conversion in a hospital bed. However, we may wonder when he says that ‘many persons of Christian faith … appear to be disappointed when told that they are not going to rejoin their departed loved ones in a bodily reunion after death in the world to come’. Adler seems to overly spiritualize the afterlife, in contradiction to Paul’s teaching in 1 Corinthians 15 and elsewhere. We shouldn’t expect a recently converted philosopher to be a master theologian, but we must question this statement, nevertheless.

The authors also vary on their understanding of the relationship between Christian conviction and philosophy. Some authors, particularly Nicholas Reschler, provide little instruction on how to philosophize as a Christian. Yet this is something Alvin Plantinga has been exemplifying and encouraging Christians to do for decades, as his fine essay points out. Richard Swinburne’s essay summarizes his grand project of modernizing natural theology through an essential inductive or probabilistic method. Plantinga and Wolterstorff, as ‘reformed epistemologists’, take another approach in emphasizing Christian faith as a starting point for philosophizing. The reader is left to sort out these differing perspectives.

Evangelical readers will generally delight in and be inspired by the spiritual-philosophical narratives given by Alvin Plantinga (a major character in the renaissance of Christian philosophy), Nicholas Wolterstorff and Stephen Davis. As a Christian teaching philosophy at a seminary, I found these essays to be both encouraging and challenging because they present the discipline of philosophy as a divine calling, a labour acceptable to God and worthy of sustained attention. These Christian philosophers have served as models of Christian commitment and philosophical achievement. May their numbers increase!

Despite its unevenness, this book makes worthwhile reading not only by Christians in philosophy but by those interested in the related disciplines of theological enquiry. These thinkers address—in differing ways and with differing theological commitments—many of the same matters as does theology, such as the existence and nature of God, the relationship between Christianity and science, and the rationality of religious belief. The writers do not assume of their readers a great knowledge of philosophy, nor do they write in a technical style. My hope, though, is that someone will produce a similar book with a consistently evangelical tenor.