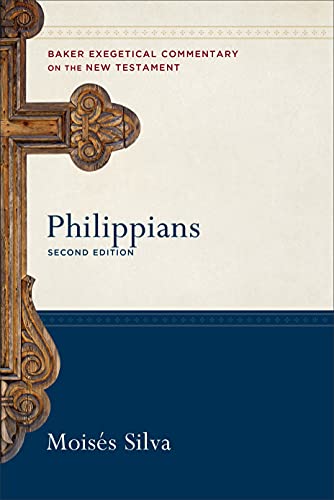 This commentary on Philippians, by a distinguished NT scholar from the faculty of Westminster Theological Seminary, is the initial volume in Moody Press’ ambitious venture of producing still another exegetical commentary series with a conservative theological orientation. When completed this series will number fifty to fifty-five volumes, covering every book of the Bible. It is designed especially for informed lay persons, students and scholars. The exegesis and exposition of each volume will be based on the original languages of the Bible and each author will provide his/her own fresh translation of the text.

Silva prefaces his volume by saying that this new project has allowed him to put into practice some of his own ideas about commentary writing. For example, he is convinced that the traditional verse-by-verse approach of most commentaries is often detrimental to a faithful exposition of the biblical text. Hence, he departs from this practice and chooses instead to write his commentary in the form of ‘exegetical essays’ on carefully defined units of thought, units that must be read ‘in blocks—the larger the blocks the better’ (p. xiv). His approach, however, does not neglect a discussion of the more technical problems of text, language and interpretation, much of which he places in a section entitled ‘additional notes’, that immediately follows the exegesis and exposition.

Silva’s introduction is relatively brief. He believes that many of the matters usually discussed here ‘are best treated as they come up in the text itself, since the exegesis of the text is the primary tool for resolving such problems’. He does, however, include in this introductory section other helpful information that is not always found in commentaries. Some of these are: (1) a reconstruction of events detailing Paul’s contacts with the Philippian church; (2) a ‘textual history’ which helps one better to assess individual textual variants as they occur in the text; and (3) a brief but interesting exegetical history of Philippians—sketches and evaluations of several of the major commentaries on this letter from Chrysostom’s study to works of present-day scholars.

One cannot but be impressed with Silva’s skill as an exegete. His extreme care in analysing the text, his thorough understanding of the original language, his grasp of linguistic subtleties, his mastery of secondary sources—all combine to provide the reader with an excellent commentary. My criticisms, therefore, pale in the light of these fine qualities and are more of the series itself than of Silva’s work.

It is this same theological orientation that calls into question his interpretation of another well-known verse—Philippians 1:6. Once again, where the context of this verse demands that the ‘good work’ begun by God among the Philippians, and which Paul clearly had in mind, be understood as the partnership of these Christians with him in the spread of the gospel, Silva understands it to refer to the Philippians’ salvation (p. 52). But the theological idea of ‘salvation’ (i.e. God’s redeeming and renewing work in the lives of Christians) must be imported from elsewhere; it is not in this text or its context. Surely it is God who begins the work of personal salvation, and it is God who will carry it through to completion, but this is hardly what was in Paul’s mind when he wrote Philippians 1:6.