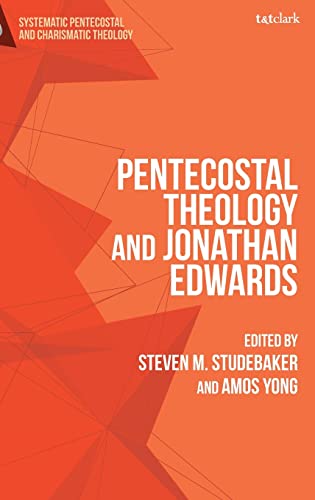 As Studebaker notes in his introduction, “Northampton and Azusa Street seem worlds apart.” Edwards’s cessationism would be a non-starter for any Pentecostal, and his Calvinism puts him at odds with most. However, Edwards’s promotion of revivals, his emphasis on experience, and his awareness of the Spirit’s activity make “America’s theologian” a prime dialogue partner for the movement. This volume is made up of seventeen chapters, grouped into five parts: Affections and the Spirit, God and Salvation, Church and Culture, Mission and Witness, and Responses.

In chapter 1, William Oliviero’s observation that Edwards viewed “God’s hand at work in furthering the gospel through Protestant political governments” (p. 28) would be firmly rejected by those Pentecostals who affirm a dispensational eschatology. Yet, Yong observes that, on a global scale, Pentecostals are “less beholden to the dispensational eschatology of earlier generations but, more importantly, also have a much more this-worldly soteriology” (p. 229). Globally, Pentecostals might also appreciate Edwards’ “internationalist horizons” that “resist an American centric nationalism”—an approach to politics that could prove invaluable with the decline of Western Christendom (p. 234).

Chapter 4 by David Courey on Pentecostal experience and Edwards’s theology of religious affections is a particularly praiseworthy essay, given obvious common ground. That “Edwards appears prepared to accept the premise that authentic encounters with God may be occasioned through experiences not explicitly foreseen in Scripture” (p. 70) is notable in that the theologian of Northampton goes beyond even what some more straight-laced Pentecostals would argue.

Steven Studebaker’s chapter 5 looks to the “narrative of the Spirit of Pentecost,” which “portrays the Spirit as a personal agent in the history of creation and redemption” to address perceived deficiencies in Edwards’s Trinitarian theology. He claims, “In pneumatological terms, Edwards’s theology was more pentecostal than traditional Pentecostal theology,” evidenced by Edwards’s assertion that “Christ’s work culminates … in the gift of the Holy Spirit.” While Pentecostals make much of the gifts of the Spirit, Edwards might help the movement develop a deeper pneumatology by understanding the Spirit himself as “the gift of grace” (p. 99).

Andrew Gabriel’s contribution to constructive pneumatology observes that “pentecostal theology has done well in promoting the connection of the Spirit and power, but, until more recently, they have been weak in developing an understanding of the divine person of the Holy Spirit” (p. 115). For Edwards, “the Spirit is the love of God that unites the Father and the Son” (p. 118). Gabriel charges that Pentecostalism has principally associated the divine attribute of power with the Spirit, though “some early North American Pentecostals described the baptism of the Holy Spirit … as a reception of divine love” (p. 119). Thus, Edwards could help the Pentecostal tradition recover a long-neglected element of their cardinal distinctive.

Chapter 9 by Lisa Stephenson focuses on Edwards and charismatic ecclesiology with reference to the Toronto Blessing. Her contribution is especially helpful in demonstrating how dialogue with Edwards could be helpful to Pentecostals on the local church level. She makes a crucial point concerning their differences on spiritual gifts, noting “these were judgments made in two different eras and judgments based on differing sets of data” (p. 174, emphasis original). She also highlights a principle Pentecostals would be wise to emulate: refusing to draw hasty conclusions concerning whether a revival is a genuine work of the Spirit or not. “Edwards,” Stephenson asserts, “would have had a problem with someone who attended a Toronto Blessing meeting and said—‘People are falling to the ground! Alleluia! Isn’t it wonderful?’—just as he would with someone else who said—‘People are falling to the ground! Appalling! How can this be from God?’” (p. 177).

Some essays appear especially valuable for the future of constructive Pentecostal theology. Tony Richie’s chapter 13, “The Grand Design of God in All Divine Operations,” might make readers familiar with Yong’s proposal for a pneumatological theology of religions wonder if sustained engagement with Edwards could enrich such a proposal (p. 210). Also, Ritchie notes that in A History of the Work of Redemption, Edwards employs “a doctrine of natural theology or common grace closely resembling Wesleyan-Arminian-pentecostal theology of prevenient grace” in engaging non-Christian faiths (p. 224). If accurate, Edwards’s thought might contribute to the construction of a uniquely Pentecostal understanding of common grace as well.

Yet this volume has one significant weakness. Racial reconciliation is briefly mentioned in reference to the Montreal Catch the Fire church (p. 48). However, it is striking that Edwards’s sin of slaveholding is never addressed—hardly a minor transgression on his part, and relevant to this conversation given that some of Pentecostalism’s founding figures such as William Seymour were themselves descendants of slaves. The question of whether the theology of a slaveholder may be trusted has been raised of Edwards in the past. A 2012 dialogue at Trinity Evangelical Divinity School’s Henry Center between Thabiti Anyabwile and Charlie Dates on this very topic provides an excellent model for engagement.

Nevertheless, this volume is groundbreaking in that it details how Pentecostalism might be greatly enriched by dialogue with a theologian with whom it appears to have little in common at first glance. Unlike some of his Reformed brethren skeptical of granting much weight to experience, Edwards might well serve as a catalyst for Pentecostalism—with his profound appreciation of the Spirit’s presence—to develop an even deeper love for the Spirit’s person and work.

Geoffrey Butler is a graduate of Tyndale Seminary and a current PhD student at Wycliffe College, University of Toronto.