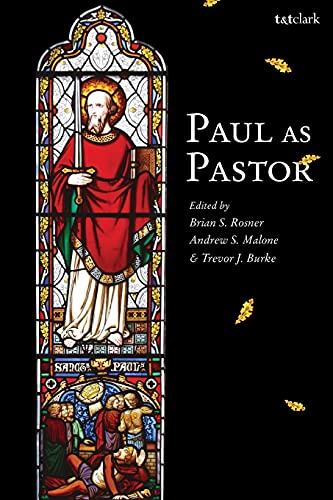 Paul as Pastor is a companion volume to the earlier Paul as Missionary, edited by Rosner and Burke (London: T&T Clark, 2011), and does exactly what the title says. The essays work through the Pauline issues and texts, with the last three focusing on the appropriation of the memory of Paul as pastor at different points in the church’s history. The papers originated in what must have been a very stimulating conference in Melbourne, Australia in 2014, which presumably explains the primarily Australian provenance of the authors (eleven such; one contributor each is based in the UK, New Zealand, and Indonesia, and two are in the US). The authors are also writing self-consciously as evangelicals, as comments in the various essays bear witness, and the large majority are Anglicans. A number have written much more extensively on the texts or themes which they present here, and that understanding and knowledge gives depth to their chapters (notably Rosner, Kruse, Barnett, Burke, and Yarbrough). Very disappointingly, there is only one woman among fifteen authors, Sarah Harris.

Brian Rosner sets the scene with an overview of Paul’s use of household language as signalling his pastoral intent, notably the use of father, mother, and sibling terms. The point is well made, although I missed a clear definition of “pastor” to guide me in reading the essays in the book. Reading the whole book, a rather loose definition of “pastor” seems to be assumed without argument, namely of a leader who cares and provides for a church or group of churches—the “shepherd” image is often invoked, even where Paul does not use it.

Alan Thompson then offers a helpful and crisp reading of Paul as pastor in Acts. The presence of this essay is encouraging, against those scholars who reject Acts as a source for studying Paul. Thompson also faces the challenge that Paul in Acts is frequently characterized as a missionary, but he argues cogently that there is good evidence—not least in the speech to the Ephesian elders (20:17–35)—of Paul’s care for the growth and nurture of his converts during his travels.

Colin Kruse takes us into Romans, and argues that Paul here grounds pastoral practice and exhortation in the nature of his gospel, resisting the idea that Paul—and pastors today—is simply pragmatic in the way he handles issues among his congregations. Rather, Kruse argues, “what God has done in Christ for the salvation of humankind” (p. 42) is the springboard and fountainhead of Paul’s calls to service and Christian living.

Matthew Malcolm, in parallel to Kruse, sees “gospel-minded rumination” (p. 54) on Scripture and the congregation as key to Paul’s engagement with the issues in Corinth to which 1 Corinthians responds. Paul is emboldened by his reading of Scripture and the house churches of Corinth at times to be lovingly provocative in both what he says and how he says it (e.g. the imagery he uses).

Paul Barnett does a fine job of sketching the situation in Corinth by the time of 2 Corinthians (which he regards as a unity), focused on two issues: the suspicion of Paul on the part of many of the Corinthian believers, and the presence of a counter-mission which sought to draw the believers away from Paul. He then studies how Paul responds as pastor to these two issues, doing some fine detailed exegetical work along the way.

Michael Bird and John Anthony Dunne write together on Galatians—perhaps the hardest Pauline letter to regard as “pastoral”! The maternal imagery bespeaks, they argue, a pastoral concern seen in Paul’s desire for the Galatians’ growth in Christ, and Paul is here acting pastorally as “heresiologist,” identifying and warning of errors, and pointing the true way to go.

Peter Orr offers a detailed look at Ephesians 4:11–12 and the roles of pastors and teachers. This essay is thus not about Paul as pastor, but Paul’s thinking about pastoring. Orr argues that the terms should be seen as a hendiadys meaning “teaching pastors”—that is, that they represent one role. I was a little concerned when he comments, “this sense dominates the construction in the New Testament” (p. 87), for this bespeaks a common (erroneous) approach in parts of this book—treating the NT as an island within hellenistic Greek, and not considering wider Greek use of terms and constructions. That said, the conclusions are mainstream and unsurprising.

Sarah Harris offers a fine discussion of Philippians with the provocative sub-title, “When Staff Teams Disagree.” She argues that Euodia and Syntyche, Paul’s co-workers (4:2–3) are key to understanding much of the letter, and rightly criticises many readings which treat their disagreement as peripheral to Paul’s letter. Harris goes on to read the letter closely to see how Paul’s pastoral strategy is carried out in ways which allow him to combine gentleness and grace with clarity and focus. This is a highlight of the book.

Andrew Malone reads Colossians (which he treats as Pauline) and asks how Paul can function as “pastor” in relation to the believers there when he has never visited. He takes an inductive approach which starts with activities which take place or are described in the letter, and notes that they are true of both Epaphras (who is the “local pastor”) and Paul: teaching, serving, interceding, and having shared goals for the converts.

Trevor Burke provides another highlight to the volume in his fine discussion of the Thessalonian letters, drawing on his earlier research. He organises his discussion around the family terms Paul uses, notably of Paul as mother and father (2:7–12), infant (2:7), orphan (2:17), sibling (3:1–5; 5:12–15), and this works beautifully.

Robert Yarbrough turns to the Pastoral Epistles and reads them through three modern lenses: the academic, the minister, and the student. He highlights the theme of hard work in the Pastorals in a fine (and new to me) discussion (pp. 145–53), in physical labor as well as activities such as prayer and teaching. He uses Todd Still’s work effectively to critique Ron Hock’s claim that Paul despised manual labour. Yarbrough concludes that (1) academics need to repent methodologically from treating Paul as a philosopher, (2) ministers need to recognise the call to necessary human effort in the pastoral role; and (3) students need to foreswear self-centeredness and self-indulgence in order to work hard.

The final three essays look at Paul through three key points in the church’s history. In a fascinating essay, Tim Patrick, a fine Reformation scholar, reads the Pastorals in conversation with the Reformation Anglican Ordinals. He provocatively argues that the Pastorals present the diaconate as an apprenticeship to being an overseer—although he appears not to engage with the key arguments of R. Alastair Campbell in The Elders (Edinburgh: T&T Clark, 1994), that “elder” is a term for those who were senior, rather than a role-title. Patrick goes on to read the sixteenth-century Ordinals within their time and to show the ways in which they engage with the Pauline material. He sees Bucer’s contribution as particularly important to the changes which were made from the Roman Pontifical which the Ordinal replaced.

Andrew Bain looks at how Augustine of Hippo understands Paul as pastor, and argues that Augustine’s primary focus here is on Paul’s humility, which is an expression of Paul’s Christ-centredness. Like Paul, Augustine desires his people to know Christ and live with Christ.

Finally, Rhys Bezzant considers George Whitefield’s engagement with Paul, particularly in conversation with Whitefield’s travels in American and his interactions with Jonathan Edwards. This reads like an essay about Whitefield and Edwards which has bits on Paul here and there, and really only focuses on issues arising for Paul as pastor in the last paragraph.

Overall, this is a valuable collection of essays, of which some are outstanding. It is a book which libraries, especially in theological colleges and seminaries, will want to have available. It should find a place in courses on pastoral theology and ministry, not least as a way of preventing those courses being driven purely by modern psychology and sociology. While the publisher initially released the book only in hardback (at £85), happily a more affordable paperback version is now available, which should expand the book’s readership.