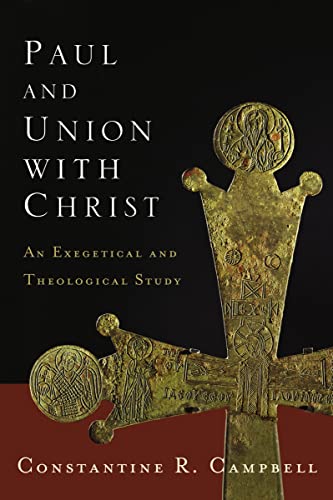 Paul and Union with Christ: An Exegetical and Theological Study

Campbell is to be admired for the scope of his investigation, his history-of-research, his inclusion of all the relevant Pauline texts, his discussion of relevant Pauline metaphors (body of Christ, temple, marriage, clothing), and his series of summary chapters in which he draws out the implications of his study. The work makes a clear contribution to the discussion of the various themes it takes up.

Nevertheless, the virtue of the work becomes its vice: the attempt at a comprehensive, inductive approach results in rather thin treatment of the relevant texts and (given the breadth of the topic) relatively brief theological reflection. The exegetical chapters of the study necessarily present brief discussions, rather than detailed exegesis. The interaction with secondary literature is likewise quite limited, and understandably so. Yet the texts under consideration often have been the focus of intense exegetical debate. One wishes for more depth, not least because Campbell not infrequently presents his judgments on the usage in brief, summary fashion.

He often finds an instrumental sense or that of agency in Paul’s usage of ἐν Χριστῷ. One wonders if the local sense is not much more pervasive than Campbell sees it. It is not implausible that local connotation is present throughout Paul’s usage: more on this thought in a moment. Precisely for this reason, however, I need more persuasive arguments in order to embrace a good number of Campbell’s judgments in favor of instrumentality or agency (e.g., the discussions of Rom 3:24; 6:23; 1 Cor 1:2, 4; 2 Cor 5:19; Gal 2:17; 3:14; Phil 4:7, 19). The same is true of those instances in which he finds causality or other meanings (e.g., the discussions of 1 Cor 4:10; 15:31; Phil 1:26; 2:1; Col 1:28; Phlm 8). The list could be expanded. Campbell is thoughtful and often brings acute observations to bear upon his exegesis. But the contexts that he examines are necessarily brief and often do not provide the weight necessary to sustain his case. That is all the more so in the frequent instances in which there has been considerable debate concerning Paul’s meaning. Thus, for example, even in Phil 2:5, where Campbell finds a local sense, he quickly moves to a moral-ethical model: the Philippians are to have the mind that is or was in Christ (pp. 105–6). The thought that Paul may be speaking of Christ’s saving lordship (“the mind that is given to you in Christ”), famously represented by Ernst Käsemann, does not come up for discussion.

Furthermore, as Campbell rightly notes at various points, a rich history of doctrine and interpretation lies behind the idea of “union with Christ.” The concept bears obvious significance in Orthodox Christianity, as it did in medieval mysticism, and in early Protestant orthodoxy. It is too bad that Campbell could not more fully engage current discussion of the history of interpretation. But the book is already lengthy enough.

Three general questions of method and interpretation come to mind. First, there is no doubt that in a number of instances the Pauline usage of ἐν Χριστῷ (or related expressions) signifies instrumentality or agency. Yet, as Campbell recognizes, this usage most likely represents a semantic choice (conscious or unconscious) over against the alternative expression διὰ Χριστοῦ or the (bare) dative of instrument or agency. In one way or another ἐν Χριστῷ probably signifies something different from the alternatives. That difference should manifest itself in one way or another in the context. Synonymy with the alternatives is not to be ruled out, but it is not likely. That is all the more so in that the metaphorical uses of the preposition ἐν are derived from the local sense and that the instrumental use of ἐν found in the NT is a relatively new development in Hellenistic Greek. Even if the usage varies from a strictly local sense, a local connotation is likely. It is not at all clear to me with respect to the expression that it is necessary to determine “(one) function in any given situation” (p. 81n46). Of course, one wants to avoid assigning arbitrary meanings to the expression. As we have noted, some contextual indication of connotation is necessary. But is double entendre to be ruled out a priori? It seems to me that the expression ἐν Χριστῷ (in its various forms) does express a local sense, either directly or as a connotation, in most, if not all of its usages.

Second, if a number of the occurrences of the expression ἐν Χριστῷ signify simply instrumentality or agency, they should be excluded from a theological analysis of Paul’s understanding of “union with Christ.” That God has done something savingly for us through Christ, or that Christ has performed his saving work for us, or provided saving benefits does not in itself entail a saving union with Christ. It is a bit puzzling, therefore, that Campbell takes up the instances of instrumentality or agency in his discussion of the theological significance of union with Christ. Indeed, at this point he seems to allow that even in the instrumental usage, the phrase designates Christ as the locus of “God’s enacted will” (pp. 328, 409). It may be that the distinction he draws earlier between exegesis and theological analysis is operative here (p. 81n46). But one can hardly assess theologically something that one judges exegetically to be absent. Perhaps I am slightly confused here.

Third, as Campbell indicates, “union with Christ” is a rather loosely defined expression. He himself adopts the terms, “participation, identification, and incorporation,” alongside it (p. 17) and indicates that union with Christ also must be understood in relation to location, instrumentality, Trinity, “spiritual union” (!?), eschatology, and “spiritual reality” (pp. 406–11). He concludes that the term “union” itself does not convey all that Paul envisions and urges a fourfold description of union with Christ in terms of faith union (!?), participation, identification, and incorporation (pp. 412–14). As the redundant description of “union” as an adjectivally modified “union” shows, a certain lack of clarity remains at this point, one that is compounded by repeated references to “union (sc. with Christ)” in the body of the work, apart from the provision of a definition or description of what is meant by it. As Campbell recognizes, one cannot operate entirely inductively. The study would have profited from a more fully developed discussion of what it might mean to speak of “union with Christ” at its very outset. Campbell never really arrives at a definition of the expression. It is questionable as to whether he should even have attempted to do so (pp. 406–20). Even when one affirms that the union between husband and wife is that of “one flesh,” one has not defined or explained that union. Indeed, who could do so? The same applies to the Pauline language about union with Christ. We must content ourselves with mere description. In this regard, I suspect that Campbell might have gained more ground in his study, if he had focussed less on categorizing the usage of the ἐν Χριστῷ and had given more attention to the significance of the saving work and benefits of the Χριστῷ. That would have required fuller engagement of the individual contexts and exegetical debates. If I may once more appeal to the category of “locality,” it is remarkable and significant how Paul identifies Christ’s person with Christ’s work in his usage. That is to say, he understands Christ in terms of his work (hoc est Christum cognoscere, beneficia eius cognoscere!) and locates that work and its saving benefits in the person. The upshot of the latter thought, in brief, is a decided exclusivity that underscores the communicative nature of Christ’s person (e.g., 2 Cor 5:21 and the usage of συν- compounds), the critical function of the apostolic proclamation of Christ (e.g., in connection with 1 Cor 1:30), and the likewise critical function of the response of faith in which participation, incorporation, and identification with Christ come to reality in individual persons (e.g., Gal 2:19–21).

Despite these criticisms, the study is careful and thoughtful, open yet cautious at the proper points. There is much to commend it. I am sure that others will profit from it.