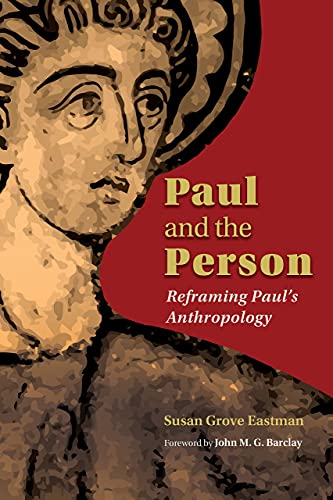 In Galatians 2:20 Paul declares, “I have been crucified with Christ. It is no longer I who live, but Christ who lives in me,” while in Romans 7:20 he writes, “Now if I do what I do not want, it is no longer I who do it, but sin that dwells within me” (ESV). The juxtaposition of these two passages introduces the Pauline puzzle of “participation and identity,” which, according to Susan Eastman, suggests “a pattern of talking about persons in which the self is never on its own but always socially and cosmically constructed in relationship to external realities that operate internally as well” (p. 8). Eastman, associate research professor of New Testament at Duke Divinity School who has published numerous articles and essays on Galatians and Romans, explores a “second-person perspective” on Paul’s anthropology in this, her second monograph.

Rather than being a thorough survey of anthropological terms, Eastman approaches Paul’s view of personhood by bringing him into conversation with his ancient context, represented by the Stoic philosopher Epictetus, and our contemporary context, in which we are witnessing “a widespread, multipronged surge of interest in the topics of personhood, human cognition, and relatedness, fueled in part by advances in neuroscience and experimental psychology, but also by current concerns in philosophy and theology” (p. 2).

The aim in inviting readers into this “complex interchange of ideas” (p. 23) is not to impose a modern conception of the self onto Paul anachronistically, but rather to illuminate Paul’s thought in new ways and, critically, to allow Paul’s voice to be heard in current debates and as a “word of address” to contemporary readers. Thus, Eastman’s theological project is similar to Rudolf Bultmann’s: to give contemporary expression to Paul’s thought rather than merely to parrot his language. Her work may be viewed as running parallel to that of Troels Engberg-Pedersen, who has a similar concern for the appropriation of Paul’s thought, but who believes that it must be refracted through Stoic philosophy in order to be accepted within a modern, naturalistic framework. Indeed, Engberg-Pedersen serves as a foil for much of Eastman’s book, as she challenges both his reading of Paul and his assumptions about the contemporary conception(s) of personhood.

The book is set forth in six chapters. After an introduction that discusses terminology, methodology, and the limitations and structure of her study, Eastman describes Epictetus’s view of the person in chapter 1 via the first-person and third-person accounts of A. A. Long and Christopher Gill, respectively. Epictetus’s detached individualism is then contrasted with recent studies on the self within the science of philosophy and experimental psychology, chiefly in the work of Shaun Gallagher and Vasudevi Reddy. Eastman claims, “across a spectrum of views … there is a broadly shared notion of the person as irreducibly embodied and socially and environmentally embedded” (p. 79). The third chapter offers a survey of the Greek terms σῶμα (“body”) and σάρξ (“flesh”) and discusses “the corporeal reality of Pauline participation.” By introducing Dale Martin’s explication of ancient views of the body as well as the voices of Bultmann and Ernst Käsemann, one may wonder if at this point Eastman has allowed too many conversation partners into a crowded room.

The final three chapters weave threads from the three previous chapters into an exposition of Romans 7, Philippians 2, and Galatians 2. Second-person readings are offered of each passage, demonstrating how the self is evacuated in a toxic relational system, how “Christ’s assimilation to humanity, in incarnation and ultimately in crucifixion, breaks the power of the relational matrix that Paul calls sin and the flesh” and in turn “instantiates and reconstitutes the human person” (p. 150), and finally, how the self is reconstituted in union with Christ and within a new interpersonal system, the community of faith. The ten-page conclusion masterfully draws together the strands of the book and points out further lines of inquiry.

In her goal of modeling “a new interdisciplinary approach to the topic of Paul and the person” (p. 178) and demonstrating the usefulness of “boundary-crossing conversation,” Eastman’s book succeeds admirably. Her vast learning and elegant writing are on full display. Nevertheless, it would have been helpful if Eastman had interacted with other works of theological anthropology such as Stanley Grenz’s The Social God and the Relational Self (Louisville, KY: Westminster John Knox, 2001) or David Kelsey’s Eccentric Existence (Louisville, KY: Westminster John Knox, 2009). Furthermore, Eastman could have addressed Paul’s view of the so-called intermediate state, which sharply raises the question of whether a human person must necessarily be embodied. These desiderata aside, I warmly recommend this book to Pauline scholars and those interested in biblical anthropology. While Eastman laments the fact that some find Pauline scholarship to be boring or arcane (cf. p. xiii), this book deserves a broad hearing and spirited engagement.