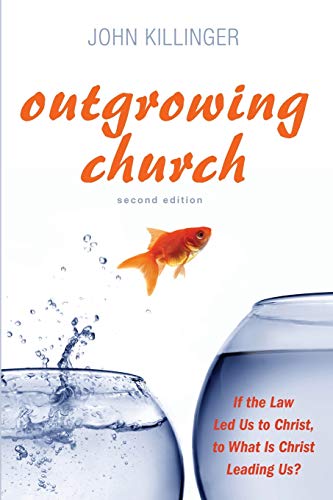 Outgrowing Church: If the Law Led Us to Christ, to What Is Christ Leading Us?

Written by John Killinger Reviewed By David B. Sloan
Ethics and Pastoralia

John Killinger is a retired minister with two doctorates, who has pastored eight churches and taught for four major American theological seminaries and three Christian colleges. The second edition of Outgrowing Church is offered as a response to recent books about “church leaving” and the “emergent church,” which Killinger thinks do not go far enough. In his view, people are not going to church because “they have outgrown it” (p. xii). Consequently, instead of looking for a “quick fix” for the church, “Christianity may well need to supercede itself” (p. xix, emphasis original). In practice, this will mean transforming our churches so that people no longer “feel compelled to leave them” (p. xxiii). This will involve “some hard reconsiderations of the nature of God, in which we listen to voices from every land and culture” (p. xxiii).

In chapter 1, “Outgrowing a Particular Church,” Killinger describes how his early education led him into conflict with the views of his original church. As his views changed, he “began to feel simplistic and idolatrous” when singing many of the old hymns that he had always loved (p. 16). Killinger compares his outgrowing of the old doctrines and hymns to growing up: as adults no longer find pleasure in children’s games, so we outgrow our youthful faith.

In chapter 2, “Outgrowing a Denomination,” Killinger notes that people switch denominations more easily than in the past and argues that “in a way, we have all outgrown denominationalism” (p. 34, emphasis original). He discusses why many Baptist ministers become Episcopalians, arguing that over time the Baptist faith lost its emphasis on “the freedom of individual believers to think as they chose” and became “enclaves of conservative robots, people who never voiced any thought or opinion different from everybody else’s, as if they feared being caught out as different or heretical” (p. 31). Killinger argues that the old fault lines of denominations have been replaced by the battle between conservatism and liberalism. He also suggests that megachurch pastors “are creating a new mythology about what it means to be Christian, [using] the tenets of motivational psychology to fashion a religion that promises success and comfort to all those … who will buy into the sheen and glitter of its made-for-TV appeal” (pp. 33–34).

In chapter 3, “Outgrowing Church, Period,” Killinger notes the baggage the church carries from its history and suggests that the church should not exist “beyond its time of fulfillment” (pp. 36–37). Instead we should see Jesus and the church as paidagogoi “to bring us to some kind of world religion,” in which the finest in Christianity is merged with the finest in other religions (pp. 37–39). Just as parents expect children to move out when they have grown up, so it is not an offense to the church if we grow as a society and surrender “our need for church, depending only on God, sans church, sans preacher, sans Bible, sans everything. Even sans Jesus. For they are all only signposts indicating the way to go, and, when we have arrived, or are far enough along the road to know the rest of the way, we can give them up, trusting in God alone” (p. 44).

In chapter 4, “The Disconnect between Jesus and the Church,” Killinger argues that there is “a major disjunction between Jesus and the life of the church in our time” (p. 57). Jesus “gave little thought to trivial matters of sin and morality and seldom called others to account for anything more than hypocrisy” (p. 58). Today’s churches, by contrast, “behave precisely the way Jesus described the Pharisees as doing, straining gnats and swallowing camels” (p. 61). There is also a disjunction in the church’s materialism, in its lack of courage, and in its deficiency of love and compassion.

In chapter 5, “The Absence of Spirituality in the Church,” Killinger laments the lack of prayer in the church. We get discouraged because we are too practical in prayer, making prayer lists as if we were buying groceries and then “ticking off the answers as we see them,” not realizing “that answers don’t really matter to the person who is seeking the divine presence and not specific blessings at all” (p. 92).

In chapter 6, “Mr. Darwin Isn’t the Enemy,” Killinger challenges his readers to better synthesize faith and scientific knowledge “in a way that does not do unjustifiable harm to either” (p. 102). Unfortunately, Killinger says nothing about the role of our faith in shaping the way we do science but repeatedly speaks of “how we must amend our religious views in order to go on living in a world of real facts” (p. 113). In particular, our understanding of evolution should cause us to see God “as being much more totally and intimately involved in creation,” and we should embrace “the humbler Jesus of the synoptic Gospels, before the church magnified his role to portray him as ‘very God of very God’” (p. 107).

In chapter 7, “The Church’s Lack of Imagination—or Spirit!,” Killinger notes that though the church was at the forefront of most earlier cultural revolutions, we are “on the sideline” or even being “beaten and battered” by the current revolution (p. 121). Whereas the first Christians “invented new liturgies, new creeds, new hymns, new literary forms, new sacraments, new apocalypses, new ways of communicating, new theologies,” the church of today is “a dull, listless, backward generation incapable of making anything new or exciting, … monuments to the past, not the present” (pp. 122–25). Killinger dreams of drawing together “the most talented, fantastic artists, musicians, writers, and architects, including as many rebels as possible,” and charging them with reconceiving the church (p. 130).

The book closes with “A Belated Afterthought,” in which Killinger notes that shortly after publishing the first edition of Outgrowing Church, he found a delightful small church that made him rethink the premise of the book. But after reflection he has realized that this sort of church is so rare that the book is still needed. He hopes that the witness of churches like this “can somehow become viral and infect all the others in Christendom” (p. 145). But he believes the book is still necessary to expose the flaws of the church at large.

As an evangelical, it is challenging to know what to do with this book, because at so many points Killinger has exposed genuine flaws in modern Christianity. His critique of many churches today as offering a “new mythology” informed by “motivational psychology” is not far off the mark. The same could be said of his critique of the church’s materialism, lack of courage, lack of compassion, lack of spirituality, and lack of imagination. But Killinger’s alternative is too untethered from the One in whom all things hold together. Killinger sees Christocentrism as a “stumbling-block” (p. xxi) and thinks the Synoptic Gospels contain a lower Christology (p. 107), but recent Synoptic research has gone in a different direction (Hurtado, Gathercole, Bauckham, Bird). Killinger’s fundamental thesis is that Jesus and the church are signposts pointing to something else, and here I am afraid he has badly missed the mark. Rather than moving beyond Jesus to find God, the true remedy is to reject our distortions of who Jesus is and to find God in Jesus. While there is often a great disconnect between Jesus and the modern church, I think Killinger has misjudged Jesus as little more than another John the Baptist, pointing to something beyond himself (p. 37), when in reality he is the one “in whom are hidden all the treasures of wisdom and knowledge,” in whom “all the fullness of the Deity lives in bodily form” (Col 2:3, 9). Killinger shows how ugly the bathwater can be, but he throws out the baby along with it, which causes this book to fall short of its potential to positively transform the church.