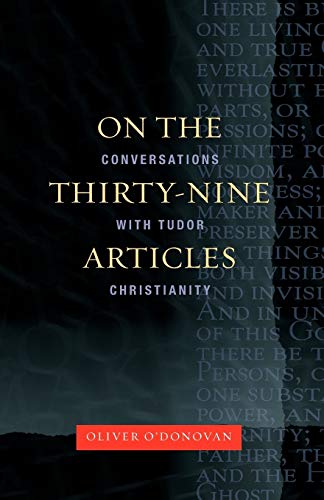 On the Thirty-Nine Articles. A Conversation with Tudor Christianity

This book is the latest in the Latimer Monograph Series, which is designed to tackle issues of theological concern from an Anglican Evangelical point of view. As an experienced teacher of theology both in England and in Canada, Professor O’Donovan is well qualified to write about the subject of the Thirty-Nine Articles, which are supposed to be the doctrinal foundation of Anglicanism. Professor O’Donovan’s personal testimony at the beginning of the book is a telling statement of the role they now play in actual fact, since he admits that he scarcely looked at them until his Canadian students asked him what was distinctive about Anglicanism!

The Anglican Communion outside England has long had a greater awareness of its confessional distinctiveness than the Mother Church has had, and it is encouraging to see that exposure to non-English Anglicanism has helped to produce a book like this—in Oxford! The cover tells us that this book is now the only study of the Articles in print which, this reviewer is glad to say, is not quite accurate! There is a very thorough study of the Articles by the Greek Orthodox Professor Scouteris, of Athens University, which is obtainable (in Greek) from Athens—a fact which demonstrates that the Articles have an ecumenical importance which has scarcely been noticed by Anglicans themselves.

Professor O’Donovan’s book is different from earlier writings on the Articles in that it neither seeks to expound them, nor to defend or attack them. The purpose is to converse with them, to try to understand what Tudor Christianity was like and why it moved in the direction that it did. Accepting the historical character of the Articles in this way allows Professor O’Donovan to appreciate what they were trying to say in the sixteenth century, without necessarily committing him to accepting them without reservation today. Perhaps this is the only way the Articles can now be read, and if so, this book does a good job of rehabilitating them for a modern audience. But it is only fair to warn the reader in advance that this is what the book is doing, so that he will not be surprised at some of the criticisms which Professor O’Donovan levels at the Articles from time to time.

Given the author’s starting-point, it is surprising and gratifying to discover that he finds so much in the Articles to commend. He brings out quite admirably how they maintain a via media which is not a colourless compromise, how they refrain from making injudicious statements about things like predestination, and how they testify to the best in Reformation teaching without cutting the church loose from its patristic and mediaeval heritage. His exposition of their teaching on original sin is particularly masterly, and he points out with great clarity how Cranmer and his successors differed both from Augustine and from many in the second generation of the Reformation, who wanted to push the church into an uncompromising Puritanism. The comparisons with other Reformation documents, and especially with the Westminster Confession, are illuminating and highly complimentary to the Articles which, according to him, display a greater theological balance in matters of epistemology (in particular).

One of the difficulties with a book of this kind is that a historical conversation is a one-way activity: Parts of the book would better be termed a reaction to Tudor Christianity, especially where they touch on matters where the modern church is furthest from its Elizabethan ancestor. These include questions like church-state relations, the lack of emphasis in the Articles on the doctrine of the Holy Spirit, and the virtual absence of a doctrine of creation. Whether one ought to assume from this silence that the Reformers lacked a deep understanding of these matters is difficult to say, and here Professor O’Donovan probably goes too far. One would like to see, for example, some reference to the other writings of the Reformers which might support this assertion, on the understanding that the Articles themselves were never intended to be a systematic theology in their own right.

For some strange reason, Professor O’Donovan seems to have a low opinion of the classical creeds of the early church, though he recognizes that the Reformers were keen to uphold them as perhaps the chief witness to the patristic tradition. The reader senses here, as elsewhere, that we have moved onto something else, and are in dialogue not so much with the Elizabethans as with theologians of our own time. It is, however, a reminder that to appreciate the riches of this book one must be fairly conversant with the modern theological scene as well as with the Articles themselves.

At the end of the day, this book is by a theologian writing for other theologians, not for the general public. To follow its arguments and appreciate its many telling points (as for example, in his criticism of the marks of the church), one must know one’s theology. But this is all to the good. It must be hoped that Professor O’Donovan’s work will have a great impact on Anglican theological circles and speak to those in other denominations who want to have a better understanding of what Anglicanism has traditionally stood for in the Christian world.

A model for theological students?

‘Who is the prophet talking about?’ Some reflections on the New Testament’s use of the Old

The priority of Jesus: a look at the place of Jesus’ teaching and example in Christian ethics

Conversion: a comparison of Calvin and Spener

Towards an analysis of cult

The World of the Bible

God and His People, Covenant and Theology in the Old Testament

Ancient Judaism—Biblical Criticism from Max Weber to the Present

Paul, Judaism and the Gentiles. A Sociological Approach

Reviewed by John Barclay
New Testament
VIEW ALL VIEW ALL