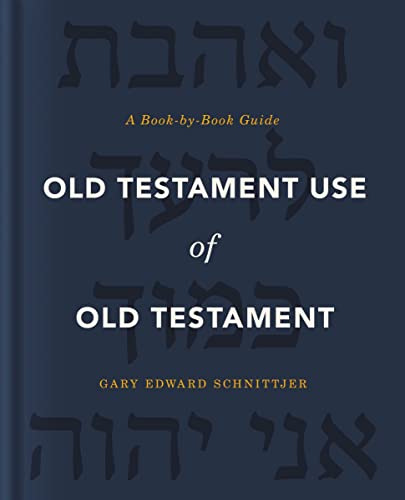 How does the Old Testament use the Old Testament? It’s an important question, especially for Christians trying to trace the progress—the story—of God’s revelation in the Bible. In fact, what better way to learn to read the Bible than to see how the biblical authors read biblical texts! Of course, others have asked and answered this same question, but none as comprehensively as Gary Schnittjer now has. In one enormous volume, Schnittjer, professor of OT at the School of Divinity of Cairn University (Langhorne, PA), meticulously identifies, discusses, and synthesizes every instance of OT inner-biblical exegesis … or, at least, as he modestly puts it early on, every “leading” instance (p. xlvi), which is to say, every instance where a later text, a “receptor” text, “explain[s], enhance[s], expand[s] … [or] adjust[s]” an earlier, “donor” text (p. xix).

Schnittjer’s data—the lion’s share of the book, comprising 846 pages—are prefaced by a useful introduction, where, among other things, Schnittjer presents the criteria he developed to identify instances of inner-biblical exegesis and the corresponding UBS-like grading-scale (i.e., grades A–F) he used to quickly and transparently indicate the certainty attached to each identified allusion. The data are then followed by two illuminating chapters, one on the implications of his findings for the NT (ch. 36), not least the fertile ground of OT “vertical contexts” for NT uses of the OT (e.g., Mark’s use of Zechariah’s use of Gen 49:11; see p. 850), and one identifying twenty-one “lightning rod passages” or “favorite contexts” of the biblical authors, a kind of hermeneutical profile of the entire OT, which includes one or two surprises. And this is to say nothing of the backmatter, comprising five indices, a 33-page bibliography, and a 15-page glossary where Schnittjer defines all the specialized vocabulary contained his book (see, e.g., “constellations,” “excavative,” and “Seidel’s theory,” among eighty-five others).

As helpful as this frame is, the real pay-off comes in Schnittjer’s 35-chapter, book-by-book deep-dive into OT inner-biblical exegesis. Each chapter covers one OT book, following the order of the Hebrew canon, and presents its data in four steps. First, each chapter begins with a shaded text box, sometimes covering five or more pages, giving a snapshot of the book’s use of the OT (including internal allusions), the use of the book elsewhere in the OT, and the use of the book in the NT. Each allusion, moreover, is graded (except NT ones) and summarized. Thus, we are told, e.g., that 2 Chronicles 35:13 alludes to Exodus 12:9 and Deuteronomy 16:7, that this allusion is probable—it receives a B-grade, and that it concerns how the Passover meal was to be prepared (p. 697). Second, Schnittjer gives a hermeneutical profile for the book. Here he discusses discernible patterns he sees in the author’s use of the OT or, as he puts it, an author’s “recurring areas of exegetical concern” (see, e.g., p. 475). He notes, for example, that Haggai “everywhere seems to presuppose the covenant in his use of scriptural traditions” (p. 437), Daniel “demonstrates familiarity with Genesis, Leviticus, Deuteronomy, Isaiah, and Jeremiah” (p. 617), and Job includes “parodies of interpretations of scriptural traditions” in order to challenge “faulty views of retribution” (p. 552). Third, Schnittjer works through each allusion, from sure (A) to “probably not” (D), putting each in its context, describing its use (its exegetical development), and giving the verbal, syntactical and contextual evidence justifying its identification. So, for example, in his chapter on the Psalms, Schnittjer identifies an allusion to Exodus 34:6 in Psalm 103:7–8, assigning it an A-grade, due to the shared vocabulary (“Yahweh,” “compassionate and gracious,” “slow to anger,” “abounding in love”) and setting (see, e.g., “Moses” in Ps 103:7) of the donor and receptor text but also to the psalmist’s exegesis of the donor text, which teases out the implications of Exodus’s reference to Yahweh’s “love” (see, esp., Ps 103:9–14; p. 504). Fourth, Schnittjer discusses non-exegetical parallels. These are instances where language from a donor text or texts is reused but not interpreted (and, therefore, graded “F”). Thus, Schnittjer notes, for example, that Zechariah 8:12 cites but does not expand Haggai 1:10 and that Zechariah 2:8 does the same with language (“apple/pupil of eye”)—Schnittjer calls it “stock phraseology”—found in Deuteronomy 32:10 and Psalm 17:8 (p. 459). These non-exegetical parallels, he notes, may not contribute to our understanding of how OT revelation advances (see p. xlii), but they do nevertheless “point … strongly to [the] continuity within and between the scrolls of Israel’s Scriptures” (p. xxiii).

Whatever quibbles one may have about Schnittjer’s method or conclusions or, here and there, prose, one must marvel at the staggering industry this volume represents. Serious Bible readers are and will remain for the foreseeable future very much in Schnittjer’s debt. It’s a debt, however, that they—we—can begin to repay if only we will consult his volume before teaching or preaching on any particular OT book. Simply using the volume to get a sense for what earlier Scriptures were formative for a particular OT book’s argument and what in the particular book’s argument was formative for later Scriptures will give us one more way of reading any book “along its grain” and, therefore, one more way of ensuring that God’s living and active voice is heard in all its life-giving fullness, for our good and for the good of those in our care.

Jared Compton is assistant professor of New Testament and Greek at Bethlehem College & Seminary in Minneapolis.