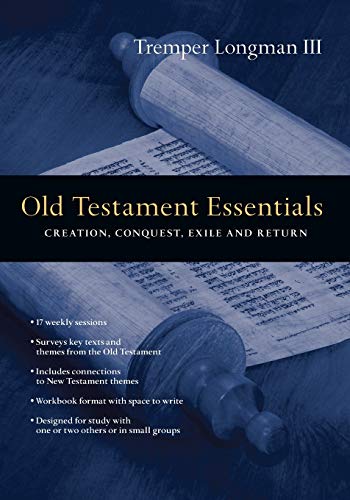 Old Testament Essentials by Tremper Longman III is designed for individual or small-group study, and the format is similar to the other volumes in the Essentials series, originally designed by Greg Ogden. It offers seventeen chapters in a workbook format with space to write between the many well-crafted study questions.

Each chapter begins with a “Looking Ahead” section, which lists a memory verse (e.g., Gen 1:1–2), the Bible study passage (e.g., Gen 1–2), and the title of the reading (e.g., “God Creates the Cosmos”). The next heading, “Bible Study Guide,” asks basic questions that engage the reader with the content of the passage. Then follows the “Reading” in which Longman does what he is well-known for—summarizing the major themes of a given Scripture portion (sometimes a whole genre or corpus) in light of the broader theological context of the Christian canon in a way that is simple and concise. After this is the “Reading Study Guide,” which asks questions that engage with the previous reading as it relates to life or to a given passage. Then there is approximately a page devoted to “Anticipating the New Testament,” often followed by a few engaging questions focused on bridging the Testaments, and another page devoted to “The Ancient Story and Our Story,” which summarizes the life application and includes a transition to the next chapter. Finally, each chapter concludes by recommending (usually two) resources for “Going Deeper,” which appropriately shows partiality towards the NIV Application Commentary series and to Longman’s own popular-level publications on the OT (e.g., his How to Read series).

The “Reading” portion of each chapter is where Longman’s expository strengths are most evident, especially in the chapters dealing with subjects that are Longman’s specialty (e.g., psalms, wisdom literature). Occasionally Longman will broach a debated issue, such as the date of the exodus (p. 68), but he points readers elsewhere since the Essentials series is not designed as a technical introduction. Although the series officially employs the NIV as a default Bible translation, Longman frequently opts for the NLT (e.g., pp. 16, 19, 32, 77), presumably due to his work as one of the senior translators for that project.

There are, of course, a handful of areas that could be improved. First, there may be a pedagogical flaw in suggesting memory verses from the NT in a curriculum that purports to teach the OT. For example, assigning 1 Cor 1:27–29 for a Bible study on Isaac and Jacob (Gen 25–36) is potentially counterproductive since it fails to promote OT literacy and may inadvertently minimize the authoritative message of the OT text. This would appear to be a missed opportunity in about one-third of the book (i.e., five chapters out of seventeen).

Second, Longman’s comments about law and ritual (in chs. 8–9) need some clarification, in my view. He works with the commonly used categories of “moral,” “ceremonial,” and “civil” as a heuristic for interpreting the law (pp. 97, 99, 101), even though they would make little sense to an ancient Israelite (in which moral matters can be ritual matters and vice versa) and are not explicitly employed in the NT. Furthermore, Longman writes concerning OT sacrifices: “Their only significance is that they anticipate the sacrifice that would really matter, namely Jesus” (p. 113; see also p. 11), which seems to imply that these sacrifices have no significance by themselves. However, it is important to explain that in ancient Israel, the ritual system primarily served to purify sacred space and objects so that God would remain present in the midst of his people (see J. H. Walton, “Equilibrium and the Sacred Compass: The Structure of Leviticus,” BBR 11 [2001]: 295–99). Thus, one would do better, in my opinion, to show how God is revealed through these and how God specifically relates to the ritual categories of space, status, and time in contemporary Christian experience (cf. Rom 12:1; 1 Cor 3:16–17; 5:6–13; 6:19–20; 2 Cor 2:14–17; 6:14–18; Eph 2:11–22; Heb 10; 1 Pet 1–2; etc.).

Despite these relatively minor caveats, Old Testament Essentials offers helpful curriculum for small group leaders and Sunday school teachers because so many Christians today “do not know what to do with the Old Testament,” even though they may “love the Bible” (p. 9). Longman does a huge service to the body of Christ by packaging scholarly content on the OT in a way that is accessible to everyone and facilitates Christian discipleship. As someone who teaches OT Survey four or five times per year and also as one who facilitates small-group Bible studies on a regular basis, I look forward to promoting and employing this book in my own teaching contexts.