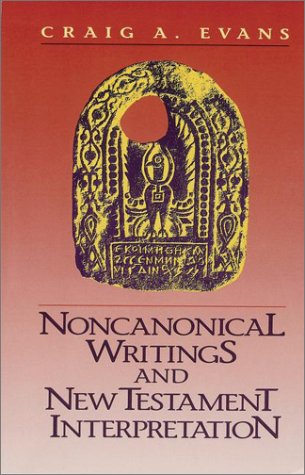 This book targets as its primary audience ‘students who aspire to become New Testament interpreters’, with the hopes of offering ‘comprehensible and manageable’ introductions to the vast array of ancient literature relevant to NT study (p. ix). Twelve chapters explore OT and NT apocrypha and pseudepigrapha, the Dead Sea Scrolls, versions of the OT, Philo and Josephus, targums and rabbinic literature, early Christian fathers, Gnostic and other writings, with one chapter giving examples of how NT exegesis can be helped by having an understanding of this literature. Six appendices are included, as well as three ancient and modern indexes. To present all this literature in a user-friendly manner which exposes its significance for NT study is a tall order and, while any single author will demonstrate weaknesses in such an undertaking, Evans succeeds where many might not have done.

Evans’s introduction to the book suggests that his primary interest is the way in which the NT authors handle and are influenced by OT Scripture and its developments. This has been an interest of his throughout the years, and it is an important issue which is currently having a resurgence in NT study. Nonetheless, I wonder how different this book might have been if it had been written by someone with more pronounced sociological interests. It may not be unfair to say that Evans focuses primarily upon matters cerebral; there is little about worship patterns or social realities, unless they can be shown to have influenced the ideas of a text. Accordingly, one might be left with the impression that NT study is first about ideas, and that these often passionate and engaging texts can be reduced to storehouses of concepts to be plundered in aid of NT study. There is little feel for the piety of the texts in what is often detached and descriptive analysis.

Since he has needed to be brief, Evans’s treatment, while often helpful, can be frustrating. So, for instance, one Qumran scroll is said to contain two hymns, while another is said to be a benediction, with nothing more said of either (p. 63); equal space (one paragraph) is given to the extremely important text 1 Enoch as to Pseudo-Hecataeus, a work that I have never seen discussed; on occasion, the reader is told that a particular issue might be important for NT study, but this is often simply signalled, not discussed in any depth (e.g. the astrological interest in Treatise of Shem ‘may shed some light on Mt. 2:1–12’, p. 24); at times concepts are discussed as if there was a single common belief shared by all, verging on ahistorical abstraction (e.g. ‘Messiah’ in OT apocrypha on p. 18); when surveying rabbinic literature, Evans may give an overly-optimistic impression of its direct relevance for NT study, without much of the expected cautions about dating the material; mention of texts such as 5 Ezra and 6 Ezra do not appear in the chapter on NT pseudepigrapha and apocrypha, although recent work has highlighted the potential of the former (especially) for the study of early Christianity.

In such a project, any reviewer will find minor points to his dissatisfaction, but the merit of the book needs to be judged on its overall value. In this regard, Evans’s work provides a helpful resource, signalling the potential of this material for aiding NT research. Evans’s expertise is evident especially in his work on the Dead Sea Scrolls, Philo, Josephus, and rabbinic literature (a good example of Evans at his best appears on pp. 123–125). Unfortunately, I found the summaries of OT pseudepigrapha to be less helpful than they might have been, and one might do better to take the time to read the various introductions in J.H. Charlesworth’s The Old Testament Pseudepigrapha. Nonetheless, Evans’s work should generally be judged a success in meeting its aims. It is the kind of book that does not require careful attention to an intricate argument; one can read it sporadically, on the bus or train, after a long day, and always with benefit. While reinforcing the need for students of the NT to be students of the literature of the Greco-Roman world, Evans’s work succeeds in making that prospect enticing and the literature intriguing. The only thing left after reading this book is to do the hard work of studying carefully the literature itself and entering respectfully into the life-world of those who produced it in expression of their life before God.