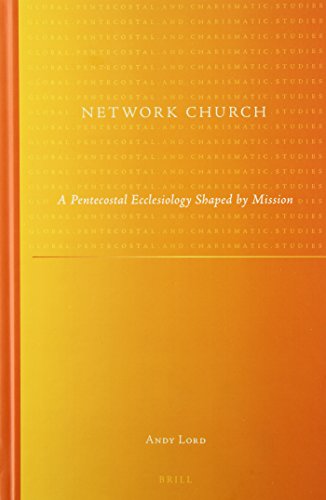 Written by Andy Lord Reviewed By I. Leon Harris
Mission and Culture

In the past, Pentecostalism has been viewed as a movement without a theology; but recent scholarship has taken up the challenge and is developing a theology of its own distinct shape. Andy Lord is one of those scholars. Lord's work fits within a larger project that is developing a Pentecostal theology from within the Pentecostal experience, and which also engages systematically with the wider corpus of Christian theology, and the surrounding culture. This particular book attempts to expand on Lord's earlier engagement with mission and Pentecostal theology ( Spirit-Shaped Mission: A Holistic Charismatic Missiology [Paternoster, 2005]) in order to develop a constructive account of Pentecostal ecclesiology.

When reading this book, the reader must keep in mind that Lord is writing within a framework shaped by the experiential contours of Pentecostalism. Lord is developing a coherent account of ecclesiology that is consistent with the Pentecostal tradition. With this in mind, the reader will see that Lord develops an ecclesiology using a triadic scheme of descriptive, constructive, and critical analysis of the topics throughout this book.

In chs. 1-3, Lord discusses the state of Pentecostal scholarship as well as establishing the location and purpose of his particular ecclesiology. In chapter one, Lord introduces how ecclesiology has been viewed in earlier accounts of Pentecostal theology. Here he introduces the method of the book; instead of creating a new account of ecclesiology, Lord is codifying the ecclesiological practices of Pentecostalism since its inception in the early twentieth-century. For Lord, Pentecostalism has operated as a loosely structured group of individual assemblies and/or organizations that cooperate in areas such as missions. Lord refers to these loosely structured cooperative units as networks. So it is through the use of the Pentecostal ecclesiological experience defined by networks of missional cooperation that Lord develops his account of Pentecostal theology: developing theology from the inside-out.

The method for developing a Pentecostal theology takes shape in chs. 2-3. Throughout this work, Lord engages recent Pentecostal scholars such as Kenneth J. Archer, Simon Chan, Frank Macchia, and Amos Yong, but it is Yong's method that further refines and shapes Lord's ecclesiology. Yong's approach is a threefold approach of Spirit-Word-Community that seeks to maintain a Pentecostal identity while engaging with a broader ecumenical appeal (i.e., other non-Pentecostal Christian traditions) as well as reaching out to “other religions [and] to the whole of creation” (p. 35). This is an important inclusion because Lord appeals to the outworking movement of the Trinity to demonstrate that Pentecostals have always moved outward toward the other, albeit some Pentecostal groups have been more successful than others. Yong's approach, as described in the book, ultimately leads to an ecumenical and secular engagement that Lord finds is an appropriate model for Pentecostals as people of the Holy Spirit, who is poured out on all flesh.

The Holy Spirit is at the center of Lord's Pentecostal ecclesiology as seen through his concept of networks, where the Holy Spirit creates an openness in mission which allows for coordinated effort towards church planting and growth. Lord does not develop his theology of ecclesiological mission-oriented networks through theological reflection alone, for “there is sufficient evidence of the Spirit generating networks that there is a need for an ecclesiology that takes this into account rather than one developed independently of this working of the Spirit” (p. 94). Lord discusses Paul's missionary strategy and the theological developments of the (so-called) Latin and Eastern fathers in order to firmly locate his network concept within the early traditions of the church. This allows Lord to maintain continuity with wider traditions, thereby maintaining his connection with recent ecumenical concerns of other Pentecostal scholars.

The ecumenical concern is fleshed out when Lord introduces catholicity, which is a cipher for connecting the unity of the Trinity with the Spirit's eschatological drive towards unity in creation. It is the drive towards unity that also marks Pentecostal ecclesiology towards network partnerships and also a missiology of contextualization. By including network partnership and the notion of contextualization, Lord is giving space to an ecclesiology that is shaped by the doctrine of the Trinity because of the outward turn to the community. This is a return to Yong's method of Spirit-Word-Community.