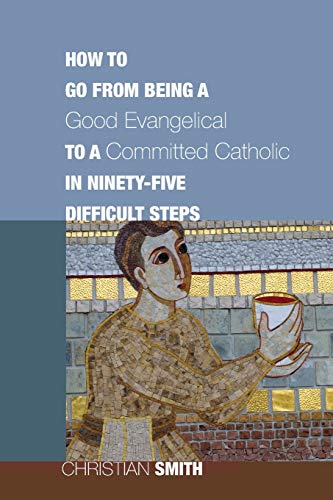 In 2011, Christian Smith, a Notre Dame sociologist, said farewell to evangelical Protestantism. Raised in evangelical Christian day schools, an alumnus of the evangelical Gordon College, and in his second research university posting, Smith-after lengthy deliberation-was received into Roman Catholicism. Such transitions are often reported today, and such recruits to Catholicism regularly write books describing their change of loyalty. Smith is conversant with this “convert” literature, and this volume boasts endorsements from such writers.

Thus Smith's Ninety-five Difficult Steps ought to be seen as of one piece with Tom Howard's Evangelical Is Not Enough (1984), Scott and Kimberly Hahn's Rome Sweet Home (1993), and Frank Beckwith's Return to Rome (2009). Yet there is a sense in which it is not like them. As a social scientist with strong interest in the sociological study of religion, Smith is intrigued with the question of how negative perceptions, which formerly seemed non-negotiable, are sometimes displaced by new ways of thinking. He believes that his own re-affiliation to Catholicism was the outworking of just such a paradigm-shift.

Smith describes how such shifts unfold in the mind of thoughtful persons who gradually tabulate the “anomalies” (i.e., the embarrassing features) of evangelical Protestantism. Granted, our minds do “file away” things that “grate” on our sensibilities. We do periodically revisit these, and sometimes a major conviction is overturned. Here Smith proceeds plausibly; his description works just as well to explain how a Pentecostal might turn Episcopalian or a Catholic turn Baptist. But granting this, it is also fair to point out that Smith's subsequent attempt to catalog forty-four evangelical “anomalies” (all “trending” towards Catholicism) is a contrivance. Smith, having set out to tabulate so many evangelical foibles has, by this determination, committed himself to overreach. In reality, there simply are not this many truly substantive items to be named. In order to arrive at that number, he will need to include the half-cocked with the weighty. Pursuing so many, Smith will also wade beyond his depth, leaving social science for theology, where his opinions need not be treated with the same deference.

Consider Step 5 (p. 33): the existence, within evangelicalism, of “embarrassing evangelical spokespeople.” Smith is reminding us of hucksters within religious broadcasting, with their exaggerated claims to divine promptings and so on. It is not hard to fill in the blanks with the names of some, already exposed as frauds, and some who still await exposure. But does it never cross Smith's mind that the Catholic world has also had its share of envelope-pushers? Consider Father Joseph Coughlin (1891-1979) of Michigan, a kind of Catholic counterpart to the fundamentalist Protestant Carl McIntire (1906-2002) in anti-Communist crusading. And if American evangelical Protestantism has had to cringe over the broadcast gaffes of CBN's Pat Robertson (b. 1930), world Catholicism has had to swallow hard over the antics of Holocaust-denying bishop Richard Williamson (b. 1940). Every expression of Christianity has those who “go rogue”; their existence proves nothing in particular about that one expression of the faith.

Step 26 (p. 57) lampoons evangelical Protestantism's current fascination with Catholic monasticism shown by its preparedness to launch “a new monasticism.” Why not take hold of the “original” as it continues within the Roman communion? Why create some “ersatz” evangelical substitute? This is a telling argument, but it conveniently overlooks that outside Africa, Catholic forms of monasticism (male and female) are on life-support. How many monasteries now house evangelical colleges and seminaries? Some are bed and breakfast establishments, while others are museums. You too may (for a fee) step into Savonarola's former cell at Florence. But do not expect Smith to acknowledge such “feet of clay” in the movement he has embraced after his paradigm shift.

Step 30 (p. 63) proposes that evangelical Protestants are blissfully unaware of the fact that it was the Roman Church that gave us classic formulations of the Trinity and Christology. Yet evangelicalism, in appropriating these, is the beneficiary of the very “teaching office” of Catholicism that our movement pretends does not exist. Smith's narrow proprietary perspective on this question, by extension, faults the Eastern Church too. For that communion also does not accept suggestions (like Smith's) that the doctrinal deliverances of the early ecumenical councils were the property of Rome. We agree with Orthodoxy on this; we speak of the accomplishment of the whole early undivided church.

Step 32 (p. 67) urges that evangelical Christians ponder their being part of a rootless movement cut off from the nurture of Rome. Evangelicalism, which is barely 300 years old (so Smith holds), and Protestantism, which is barely 500, should admit that they are striplings. The splintering so common to the Protestant world is only the bitter harvest that has come from original willful division. But Smith, functioning as apologist, cannot mention the fact that Rome was party to a schism with the Eastern Church in 1054 or the splintering that went on century after century within the monastic world. The claimed “unity of the faith” preserved only by Rome, so important for the purposes of Smith's apologetic, is fairly cosmetic.

In Step 33 (p. 68) Smith lays at the door of Protestantism the advance of secularization in the West since 1500. Here, Smith, as social scientist, raises a critical issue. A continued allegiance to Rome, he proposes, would have at least delayed the West's plunge into this abyss. Though he does allow that post-Revolutionary (and nominally Catholic) France contradicts his hypothesis, real complexities are papered over. By all accounts, European Catholicism deliberately and successfully adapted itself to the separation of church and state that prevails in the new world. Was this adaptation a tragic betrayal? And is Smith's ideal of the non-secular nation that of nineteenth-century Italy, in which the Papacy opposed freedom of religion, the extension of the right to vote, and public education? This question is not treated with evenhandedness.

Step 36 (p. 71) entails Smith's lecturing evangelical Protestants on the folly of staking so much on a claimed inerrancy of the Bible. Yet his implying that Catholicism has never gone out so far on this limb is incorrect. Pope Leo XIII espoused this doctrine, and a dictation theory of inspiration to boot, in the 1893 Encyclical Providentissimus Deus.

Of special gravity for Smith is Step 44 (p. 77): the reality that there are so few evangelical Protestant Americans who are “public intellectuals.” The Supreme Court of the United States contains several Roman Catholic jurists of distinction but no Protestants. Things have improved since Mark Noll wrote The Scandal of the Evangelical Mind in 1995, but the sober fact remains that it is institutions like the Roman Catholic University of Notre Dame that are increasingly providing today's evangelical Protestant scholars with the opportunity to teach in research universities. This anomaly has plainly perturbed Smith, yet he has not faced the fact that Notre Dame has been pleased to employ many Protestant academics (such as he was on arrival) on their own terms, given the research and writing profiles they developed earlier. Most of them retain their evangelicalism. Why is Smith's outlook towards fellow evangelicals more peevish than that of his university?

Having maximized the difficulty that evangelicalism's anomalies represent to thoughtful persons, he depicts a range of difficulties present within his new communion likely to be faced by seekers after truth. Will it be claims to papal infallibility (Step 71), the practice of prayers for the dead ( Step 74), Rome's policy on birth control (Step 77), your local Catholic parishes' almost certain failure to provide you with a place of spiritual fellowship (Step 84), or the widespread child abuse scandals (Step 92) that makes you hesitant to come after him to Rome? Smith's purpose is to stress that these difficulties are only apparent-trifles really. Intelligent persons cannot be put off by them. But remember: evangelicalism's anomalies are real and insurmountable!

In sum, this is a provocative book that requires careful reading. It provides some insight as to how minds sometimes relinquish entrenched religious convictions. But it is the opposite of evenhanded in handling hard questions. Was Smith's own mind changed by this kind of “heads I win, tails you lose” argument? Does he truly suppose ours should be? Discussed in multi-disciplinary settings (where Smith's sociology credentials are not equated with theological acumen), it will emerge that 95 Steps regularly misrepresents evangelical Protestantism and often misrepresents Catholicism. 95 Steps is much more the partisan tract of the headstrong convert than it is a helpful exploration of how thoughtful persons change their minds.