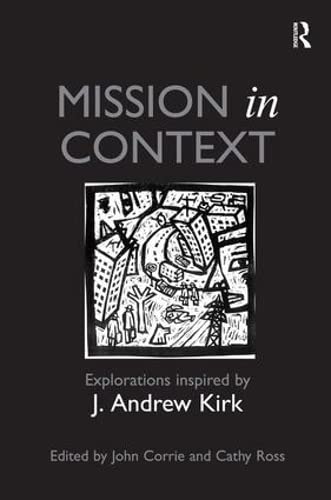 Assembled by John Corrie of Trinity College Bristol and Cathy Ross of Ripon College Cuddesdon, this volume is a Festschrift celebrating the teaching and writing ministry of one of the second half of the twentieth-century's leading missiologists, J. Andrew Kirk.

With a foreword by Christopher J. H. Wright, who acknowledged Kirk's influence for what later flowered into his book The Mission of God (p. xvi), this collected volume hosts essay contributions from leading missiologists around the world who in one way or another found themselves inspired by Kirk, mostly through personal interaction, but also perhaps most notably for his best known work, What Is Mission? Some Theological Explorations (1999), or its sequel, Mission Under Scrutiny: Confronting Contemporary Challenges (2006).

While bringing together the “who's who” in contemporary missiology, this compilation volume is beautifully laid out in four parts addressing these broad subjects: (1) biographically, Kirk's life and work; (2) the question of the nature of mission; (3) truth and pluralism; and (4) issues related to the contemporary state of mission, education, and religion.

The first part of the book begins with Cathy Ross's survey of Kirk's work (ch. 1). This gives way to a very personal chronological presentation of Kirk's early life, academic studies, missionary service in Argentina and Latin America, along with his work back in the UK (London and Birmingham) and around the world. This presentation in chapter 2 is provided by Daniel Kirk, Andrew's eldest son, himself a missionary in Viña del Mar, Chile. In chapter 3, J. Samuel Escobar concludes the book's first section with retrospective reflections on Kirk's contribution to the Latin American scene during a time of significant tension and turmoil for Latin America, working as an evangelical and with the Latin American Theological Fraternity (founded by Escobar, Rene Padilla, and Kirk) when Liberation Theology had become the most significant theological movement in Latin America.

Part Two hosts essays (chs. 4-7) from Padilla, Corrie, Peter Penner, and Hwa Yung, each of which in various ways address hermeneutical issues related to evangelical approaches to Scripture and the contextualization of the gospel.

Part Three then contains essays focused on perspectival truth-bearing in a postmodern situation (Parush Parushev, ch. 8) and the nature of Christian truth-claims in a pluralistic world (Vinoth Ramachandra, ch. 11). It also includes an essay working through challenges amidst the present European intercultural and inter-religious dialogue culture (Darrell Jackson, ch. 10) and an encouraging essay by Andrew Walls on the nature of worldviews and the opportunity for theological reflection to shape various Christian worldviews that have often remained underdeveloped theologically (ch. 11).

Part Four begins with Wilbert Shenk's interesting account of a working project funded by the Pew Charitable Trusts in the 1990s that Kirk was part of. This project flowed out of the British Gospel and Our Culture Programme and aimed to develop “A Missiology of Western Culture.” It met with significant interest and spawned other networks while it produced quite uneven research from its different subsets. While producing a series of short books published by Trinity Press International, what Shenk calls a “pioneering effort” and remaining model in the field is the volume edited by Kirk and Kevin Vanhoozer, To Stake a Claim: Mission and the Western Crisis of Knowledge (Orbis, 1999).

The late David Kettle offers an essay on the nature of freedom and significance of tacit faith commitment, pairing Andrew's work with Lesslie Newbigin's as over against the secular liberal claim to neutrality (ch. 13). In chapter 14, Alan Kreider draws from patristic sources after Constantine-from Basil of Caesarea and Ambrose of Milan, each writing for the upper classes-in order to chart how each reflected on the acts of war and violence in a society. As Kreider reads it, these missionary works had long-lasting consequences in the West, something Andrew Kirk was quick to note.

In chapter 16, Pete Kuzmic correlates some of Kirk's work with contemporary concerns in Eastern Europe after Communism. And in chapter 17, Allan Anderson reflects on features inherent to Pentecostal theology and their relevance for contemporary mission.

This volume is a very welcome contribution to a number of discussions related to somewhat recent missionary theology and the various developments therein. The contributors have been significant voices, along with Kirk, in important conversations surrounding the church's mission in the world today. And there is no surprise about the subject matter that each author writes on, each working in his or her area of expertise, and offering very little by way of constructive academic, missional engagement. A much more constructive and explorative approach to the contemporary state of mission theology could probably be better found in the book flowing from the 2011 Wheaton College Theology conference, edited by Jeffrey P. Greenman and Gene L. Green, Global Theology in Evangelical Perspective: Exploring the Contextual Nature of Theology and Mission (IVP, 2012). This more constructive volume contains a couple essays by some of the same contributors to this Festschrift. And yet the present volume is a fantastic collection assembling all these leading missiologists together to honor Andrew. Of particular interest to the field of missiology will be how Kirk is closely tied to each of the topics presented in the seventeen chapters. However, many who would enjoy this book at present simply will not be able to afford it at its current price-listing. Meanwhile, surely all theological libraries (in the West, at least) keeping up with work on late twentieth-century evangelical mission theology should possess this volume until it is more readily available as an affordable paperback edition, making it more easily accessible for others thinking through Andrew Kirk's legacy to contemporary missiology.