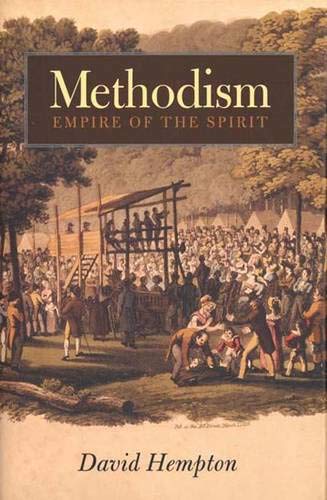 Written by David Hempton Reviewed By Herbert B. McGonigle
History and Historical Theology

There is no shortage of well-written books on the origins of Methodism but David Hempton’s new work is in a class of its own. It is nothing less than a global account of the rise and development of the 18th century revival movement, led principally by George Whitefield and John Wesley, that eventually became ‘Methodism.’ In nine chapters Hempton traces the beginnings of Methodism in Britain and America and examines its social ethos, its distinctive theology, its relation to the Enlightenment, its intrinsic contradictions and its ability to gather converts, in selected places, at a very rapid rate. This history is built around a number of polarities, beginning with ‘Competition and Symbiosis’. Following the evidence gleaned from four case studies in Massachusetts, among African Americans in the deep south, in Cornwall and in Ulster, Hempton argues that Methodism grew because of its ability to establish a symbiotic relationship with its environment. ‘Methodism was a missionary organisation that thrived on mobility and expanded in association with the rise of markets and the growth of empire’ (7).

What, if any, was the relationship of Methodism to the Enlightenment? Hempton argues that while his followers ‘flirted with the edge of religious enthusiasm’ (42), yet the movement as a whole was held in check by being anchored in reasonableness and rationality. Arguing along lines very similar to Henry Rack’s designation of John Wesley as a ‘reasonable enthusiast’, this study demonstrates that Wesley loved, at the same time, learning and culture while gathering and publishing the spiritual experiences of his followers without any trace of credulity. It is well known that John Wesley’s protest against slavery was one of the earliest made in England but less well known that he based this protest, not on arguments drawn from Scripture but on the rights of all people to enjoy liberty and happiness.

Other polarities argued for include ‘Money and Power’, ‘Boundaries and Margins’, ‘Mapping and Mission’, and ‘Consolidation and Decline’. This last evaluation is particularly perceptive. In Britain and America especially, Methodism expanded rapidly in the nineteenth century and by the beginning of the twentieth century it was the largest Protestant denomination in America. But throughout the twentieth century this growth not only slowed down dramatically but by the 1980s and 1990s, Methodism’s loss of members and adherents was paralleling what was happening in the other old-line denominations. Hempton’s conclusion is salutary. Methodism’s growth and subsequent decline throughout the world demonstrates that institutional consolidation is not enough. Methodism requires ‘energy, change, mobility and flux’, (200); the very characteristics that rapidly disappeared as the 20th century progressed.

David Hempton’s book is a landmark in Methodist history for a number of reasons. First, it is by far the most comprehensive treatment of the subject that has yet appeared. The author has amassed a wealth of documentation that is put to very good use. Although writing from inside the tradition he is examining, his evaluations are always critically constructive and argued with stringent academic rigour. Secondly, this research throws up a number of very significant discoveries and the most important of these appears on page 145: ‘Methodism was without question preponderantly a women’s movement’. This has enormous consequences when it comes to investigating Methodism as a popular religious movement. Thirdly, Hempton’s exhaustive investigation offers the best conclusion of why this worldwide movement has had such declension in the twentieth century. ‘The old Methodist tradition of community-based revivalism that swept parts of England, Wales, Ireland and North America in the eighteenth and nineteenth centuries was simply inappropriate for twentieth-century urban populations’ (194). Fourthly, Hempton suggests that just as Anglicanism gave birth to Methodism, so Methodism gave birth to Pentecostalism, the fastest-growing segment of Protestantism in the world.

This book is unquestionably a standard text for understanding worldwide Methodism. This reviewer enjoyed it enormously and learned much from it, though the subtitle ‘Empire of the Spirit’, seems a little incongruous; ‘empire’ is a bit imperialistic for that Kingdom that, in the words of Jesus, ‘comes not with observation’ (Luke 17:20).