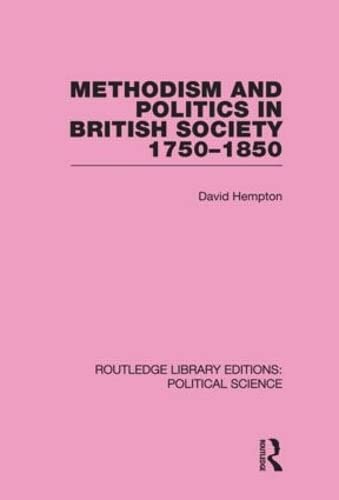 Methodism (or more often John Wesley), according to some popular apologetic, saved Britain from political revolution. At a time when the industrial revolution was causing bad working and living conditions and the French revolution was encouraging popular subversion, so the story goes, Methodism was embraced by the common people. Their Christian convictions, it is suggested, ensured that social harmony reigned. David Hempton’s book shows that this case cannot stand. Methodism encompassed men of radical views who would have liked a change of government; and it drew in too small a proportion of the population to prevent revolution. The author demonstrates that the true relationship between Methodism and politics was much more complicated—and, it may be added, much more illuminating for the Christian concerned to explore the interaction between faith and political action.

John Wesley bequeathed to his followers no elaborate political philosophy, but his conservative tendencies were developed by his successors as leaders of the Methodist connection. In times of social disorder they expelled all those suspected of disaffection, whether to the ecclesiastical principles of Methodism or to the government of the day. Furthermore, they were threatened by government with the prohibition of travelling preachers, the essence of the Methodist system of spreading the gospel, and so felt compelled to proclaim their loyalism conspicuously in order to earn official gratitude. Roman Catholic attempts to prevent the advance of the gospel in Ireland, where lived nearly a quarter of the Methodists in the British Isles, made the connection increasingly anti-Catholic. That posture, together with demands for state assistance for their schools, dictated that Wesleyan leaders developed stronger Tory leanings. Yet at the same time Liberal convictions were taking root among ordinary Methodist members, and they were to blossom in support for Gladstone later in the nineteenth century.

Although this persuasive case is written for historians, it is a readable study that many others will enjoy. Its author, no doubt with the average reader in mind, is prepared to speak of luck rather than providence, but he is himself an evangelical who is acutely aware of the political pitfalls awaiting the unwary Christian.