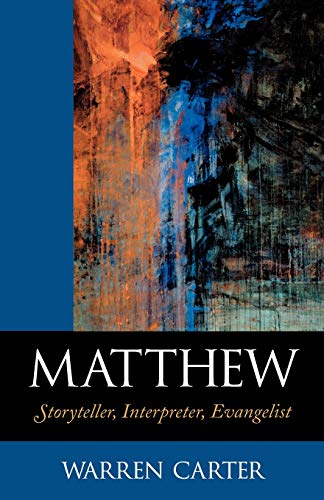 Recent research has made NT scholarship much more sensitive to the way in which the biblical texts are to be read. This introductory work by Warren Carter, who teaches at Saint Paul School of Theology, takes full account of these recent developments, and takes as its principal structure the three stages of reading the Gospel of Matthew, namely ‘Before Reading’, ‘Reading Matthew’, and ‘After Reading’.

The helpful preface reveals that at the heart of the book lies the ‘notion of an authorial audience as a reading strategy’ (p. 4). By this he means that the reader of Matthew must attempt to adopt the perspective of the audience for which the author of Matthew’s Gospel wrote. Clearly, the modern reader has no direct access to that audience and so must build up a profile of the ‘implied audience’ using pointers found in Matthew’s text.

In Part 1 of his book, Carter maintains that in order to read Matthew we must take a ‘cross-cultural step’. This observation recognizes that we are separated from Matthew’s world by both time and space, but Carter is also positive about the possibility of bridging that gulf. The discussion that follows is really a rather traditional survey of authorship, date, etc., and the methodology of redaction criticism, plus a brief discussion of the sociology of the Matthean community.

Part 2 consists of several discussions of passages from Matthew which illustrate the perspective the author wishes the authorial audience to adopt, which, Carter stresses, is fundamentally the perspective of God himself. Chapter topics in this section include plot (in which, in addition to providing a brief but very useful theological exposition of Matthew’s work, Carter discusses the intriguing relationship between ‘kernels’ and ‘satellites’!), settings, and several studies of the various characters who play an important part in Matthew’s narrative.

The brief final part is composed of a single chapter which both summarizes the findings of the previous section and seeks to bring out some of the significance of Matthew’s Gospel for contemporary readers. Carter wished to make this a distinctive of his work, and though the chapter is brief, it is suggestive for further thought. Finally, there is a useful appendix in which Carter compares the redaction-critical and narrative approaches to the text of Matthew which have been employed in the book.

Carter’s writing style is clear, and the newcomer to Matthean studies should have little difficulty following the main body of the text, though he or she should be prepared for the various technical terms which have developed in the new literary approaches to biblical study and which Carter introduces to the reader quite frequently. Although Greek words written in Greek characters are used from time to time, they are consistently transliterated and translated. The footnotes demonstrate Carter’s familiarity with the mainstream of Matthean scholarship in English, French and German, and provide ample possibilities for further research.

The bibliography is helpful, with a noticeable inclination towards recent work published in journals and in the more progressive monograph series. There are numerous distinctively evangelical works included in the bibliography, but a look at the Index of Modern Authors reveals that there is disappointingly little real interaction with more conservative views. Though the first volume of Donald Hagner’s recent two-volume commentary is referred to, it is not used in any significant way, and the important commentaries by Carson and France do not even make the bibliography. The volume concludes with indexes for Modern Authors and Scripture References.

Conservative students will find much to learn from Carter. Though they might wish to use his work in conjunction with a volume like R.T. France’s excellent Matthew: Evangelist and Teacher (Carlisle: Paternoster, 1989) for another perspective on historical questions, they will find Carter’s volume an accessible and theologically sensitive introduction to the recent literary approaches to Matthew’s Gospel.