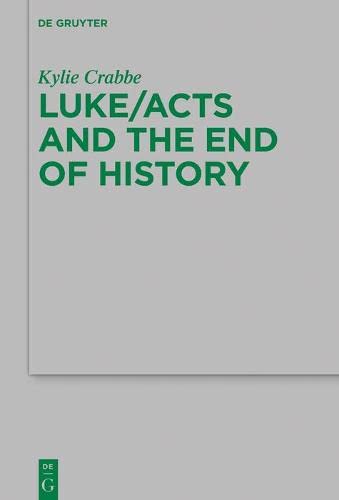 Luke/Acts and the End of History

Kylie Crabbe is Research Fellow in Biblical and Early Christian Studies at Australian Catholic University, Melbourne, and this book is a revised version of her Oxford DPhil thesis, supervised by Markus Bockmuehl and Christopher Rowland. In it Dr Crabbe enters the longstanding debate over the relationship of history and eschatology in Luke and Acts. She does this by a fascinating comparison with other ancient texts that have a variety of views on history and its direction (or lack of direction), to illuminate how Luke writes about these themes.

Her starting point is unsurprising: Hans Conzelmann’s view that Luke detached history from eschatology in order to handle the “delay of the parousia.” Dr Crabbe shows that this led scholars to read Luke and Acts as uneschatological—the End was dismissed into the indefinite future, and had little or no impact on how Luke sees history and present life for Jesus-believers. Her sensible response is to consider how Luke’s writings look when compared with other writers of a similar period, both Jewish and Graeco-Roman. A fresh part of her thinking is that she rejects the idea that genre should determine which texts are legitimate comparators for views of history and eschatology in Luke and Acts, because books of the same genre (roughly, historiography) do not necessarily address the questions concerned. Rather, in order to consider conceptions of history, other kinds of texts may be good—or better—comparators.

Because Dr Crabbe is interested in conceptions of history, its end, its direction, and the relationship of divine and human action in history, she rightly argues that such questions transcend genre. Her key texts, then, spread from the second century BCE to the early second century CE: Polybius’s Histories, Diodorus Siculus’s Library of History, Virgil’s Aeneid, Valerius Maximus’s Memorable Doings and Sayings, Tacitus’s Histories, 2 Maccabees, the War Scroll from Qumran (1QM), Josephus’s Jewish War, 4 Ezra, and 2 Baruch. A strength of her analysis is that she engages with such a wide range of texts in conversation with Luke/Acts. Ah yes, and that / —Dr Crabbe declines to use Cadbury’s famous hyphen because, even though she reads Luke and Acts together, she recognizes that, at least at the level of our extant manuscripts, the two were not presented as a contiguous whole (pp. 54–55). Thus, she lays out her method as studying this group of texts of differing genres and provenances in order to look at history from four key perspectives: the direction and shape of history; determinism and divine guidance of history; human responsibility and freedom; and the present time and the end of history.

Her study of the direction and shape of history (ch. 3) highlights two key issues: the direction (or lack of it) of history, and whether history is split up into periods (“periodisation”). Texts which lack periodisation fall into three kinds: those which lack the idea of an endpoint to history even while seeing progress within history (Polybius, Diodorus Siculus); those having a steady continuation of history (Valerius Maximus); and those presenting history as a decline (Tacitus). Other texts have periodisation and an end to history which marks a qualitative change to the state of affairs: Virgil sees progress going on to the end of history; 2 Maccabees, Josephus, and 1QM see a steady continuation of history with an end to come; 4 Ezra and 2 Baruch see history declining towards an end. Luke/Acts emerges as containing both periodisation and end-expectation, but without any sense of things overall improving or declining towards that end; so, history and eschatology belong together, against Conzelmann.

Her study of determinism and divine guidance of history (ch. 4) reviews a number of key words that are the tips of icebergs of ideas: fortune, providence, fate, necessity, and “it is necessary.” Characters in her texts have insights into the future which vary in their deterministic character, although mere humans can misunderstand or misinterpret dreams and oracles (for example). The texts can use prophecy to bolster hope for the future by claiming divine guidance of events, even where those who worship the god concerned are suffering. Luke/Acts assures readers that the divine will cannot be stopped, even though humans may oppose or reject that will for themselves.

“Human responsibility and freedom” (ch. 5) considers how far events are divinely determined and how far affected by human agency. She makes good use of John Barclay’s threefold classification of possibilities: a competitive model, where either humans or the gods have agency, but both cannot; a kinship model, where humans act in concert with God/the gods; and “non-contrastive transcendence,” in which the divine creates the space within which humans may exercise agency (p. 209). She compares Jewish texts with a Deuteronomistic approach which affirm God’s sovereignty over history, seeing signs of this in 2 Maccabees, Josephus, 2 Baruch, and 4 Ezra as in continuity with this approach. By contrast, some texts have other spiritual forces at work (1QM, 2 Bar 53–76), and other texts have those who “fight against God” (Josephus, 2 Macc). The non-Jewish writers also vary in how far human agency can really make a difference. In Luke/Acts, among much else, Dr Crabbe highlights the contrast of Mary and Zechariah: both are offered a chance to participate in God’s purposes in Luke 1, but only Mary does so willingly. Zechariah’s rejection of God’s purposes does not prevent them taking place, but it does sideline him from participating in them, at least for a time (p. 257). This pair exemplify Luke’s understanding that people are invited into God’s purposes in response to God’s initiative, and that God does not work irrespective of people’s responses, but also that God’s purposes cannot ultimately be frustrated.

In considering the present and the end of history (ch. 6), Dr Crabbe studies, first, texts which are non-teleological (see on ch. 3 above); second, Virgil’s view that the present is the end, in the triumph of Rome; and third, the relationship of present and end in the Jewish texts, where periodisation allows authors to portray cycles of divine punishment and rescue in the past, which function as a call to live a particular way in the present. Luke locates the present as a stage towards the end of history, but the difference from the other texts is that he considers that the end has already entered history through the resurrection of Jesus, the gift of the Spirit, and the exaltation of Jesus to God’s right hand. Here, we meet the familiar now/not yet tension in New Testament eschatology, but seen from a fresh angle. Dr Crabbe reads key texts (notably Luke 21:5–36) as eschatological (rather than focused on the fall of Jerusalem), and argues that Luke sees more end-time events still to come before the end of all things. A helpful diagram (p. 329) shows her view of the present in the flow of history according to Luke.

A clear and helpful conclusion (ch. 7) summarizes the argument, reviews the method used, and shows how her work reframes and reshapes thinking about history and eschatology in Luke/Acts.

This is a fine book whose full and detailed arguments I have scarcely been able to sketch in this review. There are numerous discussions I shall return to in thinking about Luke and Acts, particularly as illuminated by the comparisons Dr Crabbe makes with her Graeco-Roman and Jewish texts. Students of Luke and Acts, particularly the history and eschatology of those books, will find this indispensable to their reading and research.