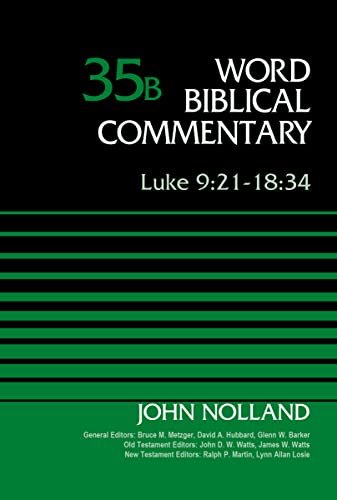 The second volume of Nolland’s work continues the strengths of his first volume. Reflecting the Word commentary format, Nolland begins each pericope with analyses of sources, authenticity, historicity and form questions before moving to a verse-by-verse discussion. Often the discussion of historical-critical matters is as long as the verse-by-verse discussions (e.g. Lk. 9:28–36). In fact, more attention seems to be given to these questions than in the first volume. Nolland often defends the integrity of the ‘core’ of Jesus’ teaching, while being more circumspect about the exact wording of the sayings of Jesus (e.g. the passion predictions). In passages like the transfiguration, he is careful not to close out the historical possibility of such events taking place. Each unit closes with an explanation section that attempts to synthesize the results in terms of the book’s movement and its major themes. Two excurses discuss the Son of Man and the Jerusalem journey section.

Nolland, Vice Principal and Lecturer in NT Studies at Trinity College in Bristol, England, has always done very thorough work in detailing the periodical discussion surrounding the Lucan text. His discussions are detailed and insightful. In fact, the scope of his interaction makes this commentary a necessity for those who want to interact with recent, technical exegetical discussion about the gospel. For this purpose, the commentary is a gold-mine. In general Nolland concentrates on more recent resources in his actual comments, so the discussion is very current.

When it comes to Luke’s gospel itself, it is clear that the break-up of the gospel into three volumes and the organization of its units, though given some thought and attention, is less well developed. The outline proceeds only down to the second level, so that there is no distinct separating out of the major ‘Jerusalem journey’ section in the presentation. Rather it is briefly treated in an excursus. The gospel’s larger block units are mostly ignored, as are the journey subsections, other than being listed on p. 531 and very briefly commented on otherwise (e.g. p. 722). The argument for terminating the journey at 18:34 with the passion prediction seems to read Luke too much in light of Mark, since in Luke 19:41, Luke still portrays Jesus as approaching the city, a point that means journey language was not abandoned after 18:34. This Luke 19 pericope seems a better ending point for the journey on internal literary grounds. One helpful observation in this discussion of unit division is the observation that many themes of 9:51–18:34 are set up in 9:21–50. Still one can question whether the major thrust of Luke’s story (as opposed to the analysis of its details) can really be told, if such major units are left largely undiscussed.

On the other side of synthetic concerns, there is no internal outline within pericope units either, so that the flow of argument and logic within a unit has to be pieced together. Examples are the way he separates the discussion of Luke 10:25–28 from 10:29–37, when the parable is clearly a development of the previous remarks and is really part of the same unit of discussion, and the breaking up of Luke 14:1–12 into three units. It is these issues of synthesis where the volume is less helpful, though the explanation sections seem less redundant as well as more synthetic and helpful man in the first volume. Still, pastors will probably be frustrated with the volume since one will have to negotiate much technical, historical debate to find points of emphasis that prove of value to message preparation.

Among the more interesting positions Nolland takes on some key issues, one can note the following: he rejects a parallel with Deuteronomy on the Jerusalem journey section, while accepting in principle the structural work of Blomberg; he opts for the presence of kingdom-inbreaking language in Luke 10:9; he shows clearly how Jesus develops OT ethical themes (e.g. 10:25–28); he sees the Lord’s Prayer as part of a single tradition, with Matthew’s form generally being the more original, and 11:8 as the ‘shamelessness’ of the householder receiving the request to aid. Other insights involve the themes of arrival and Jesus’ authority in 11:14–23, a single tradition behind Luke 11:37–54 and Matthew 23, a pre-Lucan tradition linking the three parables of Luke 15, the steward of Luke 16:1–8 reducing levels of payment dealing with the rental of land, assumes Luke 16:19–31 is a parable, and the kingdom of God as ‘right there’ meaning that it has arrived without notice in 17:21.

One observation is that Nolland seems rarely to consider the possibility of certain pericopes reflecting the presence of multiple versions in the stream of tradition. On this point, he follows the current critical consensus, but one wonders whether the tradition histories of some pericopes are more complicated than many argue for (e.g. Lk. 11:37–54; Mt. 23). Other discussions are so broken down into verse-by-verse detail that it is hard to assemble a final position with clarity (e.g. Lk. 17:22–37). But such observations simply reflect the difficulty of bringing together all the many facets of study in this longest of gospels.

In sum, this commentary is a worthy member of a series of strong, technical commentaries on Luke, joining Marshall and Fitzmyer near the top of the class in English language resources. Nevertheless, those looking to engage the gospel at a more synthetic and thematic level will probably want to look elsewhere.