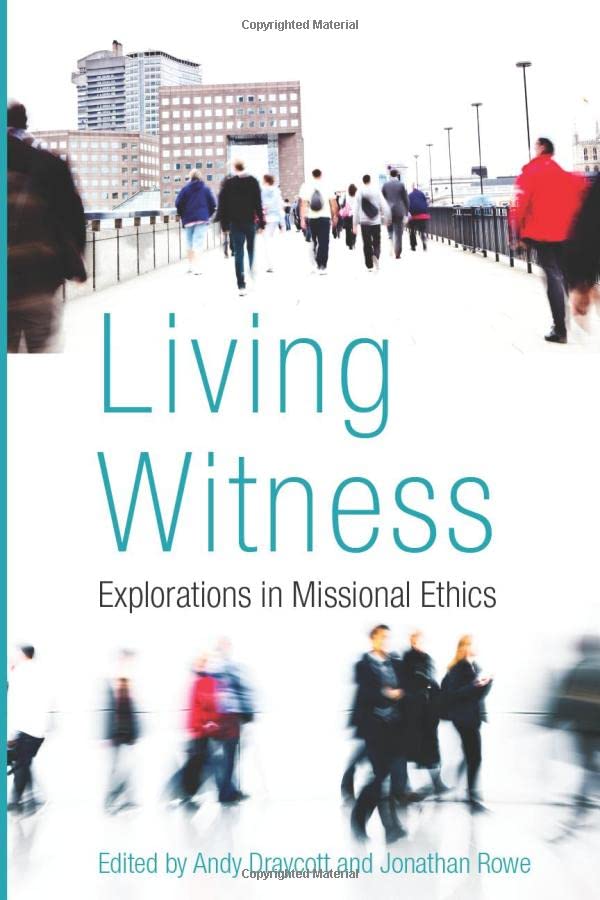 Can “mission” inspire a fresh ethical paradigm that might, in new ways, help the church live faithfully as a people called to proclaim the gospel? Living Witness: Explorations in Missional Ethics is a collection of essays geared toward educated church leaders that attempts to provide both foundational and practical guidance in articulating a new model for doing Christian ethics.

The editors identify the heart of missional ethics in the missio Dei, the mission of God. This locates the source of the church’s moral witness in God’s ongoing reconciling work. God goes before his people on mission. A missional ethics is, therefore, God-shaped. But, we are told, it is also story-shaped, community-shaped, and ‘other shaped’; all of which are the case because they correspond to aspects of the shape of God’s mission. Against a rigid assertion of a new program, the editors emphasize that the best that can be offered is an outline, an acknowledgement of the priority of God and his mission for Christian ethics. This makes our moral work provisional, at best. “‘What is missional ethics?’ . . . it is all the ways in which Christian ethical practice flows out of, supports and advances the wider mission of the church to proclaim the gospel—in other words, the church’s living witness” (p. 31).

Beginning with Christopher J. H. Wright’s somewhat unsatisfactory survey, the volume attempts to orient the collection around broad and sweeping biblical, theological themes. Sometimes such overviews are necessary, but they seldom make for absorbing reading. Brian Brock’s essay, on the other hand, is an engaging and imaginative look at the theme of mission as gardening. Mission is not a “world-remaking project,” he claims, but rather, like the task of the gardener who tends with care, “images God the more it is stripped of its pretentions to control and mastery” (p. 58).

The rest of the essays in the first section (titled “Foundations”) continue to cover broad theological themes: Hope (Grant Macaskill), Church (Matt Jenson), and Preaching (Andy Draycott). Most notably, Jenson’s essay attempts a missional approach to homosexuality. His dismissal of it in a move that equates homosexuality with mere desire (p. 110) may come across to many in the gay community as identity-denying. Jenson’s example of his lesbian friend, rather than reinforcing his argument, simply reinforces how problematic mission is to a people-group whose own self-identification is reckoned sinful by the missionary. These are difficult issues, but one should not, as Jenson does, dismiss the question of homosexuality as settled on deontological grounds and proceed to a missional articulation of the fallout as if that’s really the issue (p. 96). What I would like to know from Jenson is how a missional ethics derived from a biblical-theological framework might inform the very question of sexual morality, especially the question of homosexuality. Toward this end, Jenson’s treatment of homosexuality is couched in a helpful discussion of the church as family, putting both hetero- and homosexuals to the test, and that is certainly a welcome contribution to the discussion by all parties who care deeply about these issues.

Sarah Ruble’s essay begins the second section on “Issues.” Her historical look at the way that the ‘evangelism versus service’ controversies were packaged by Christianity Today since the 1960s is fascinating and well worth the time. Ruble helps us see how the very conversations we’re having are shaped by unexamined power arrangements. For example, she writes, “Packaging evangelism and service as gender-neutral categories did not preclude the possibility that they were being defined through the lens of male experience—it simply made it more difficult to see that the normative voices on mission were not un-gendered, but male” (p. 154).

The “issues” section follows with essays on “Families” (Joshua Hordern), “Friendship” (Guido de Graaff), and “Politics” (Jonathan Chaplin). In an essay on “Servanthood,” Nathan John Moser looks as the Isaianic servant texts as a way of discovering what the servant motif actually looks like for mission. In dialogue with the Latin American context, Moser asks some hard questions and is unflinching in his analysis of the contrast implied between the servant and the leadership models at work in South America (and elsewhere).

Sean Doherty’s essay on “Money” asks us to see trust in God as the missional act that robs money of its power over us, and proclaims the good news of God’s trustworthiness. Doherty is not trying to make friends in this essay with good, conservative, economics; rather, he challenges precisely those economic assumptions by warning against the sin of hoarding by which we rely on wealth for our security. “Storing up” (Matt 6:19) betrays the trustworthiness of God.

Finally, M. Daniel Carroll R. ends with an essay on “Immigration,” bringing welcome biblical clarity to the debate. God’s own mission has been to create, initially, a migratory and alien people whose homeland is, for much of the story, simply a promise. If this is so, can we be part of God’s mission without a deep love and concern for—and abiding presence with—the immigrant?

Living Witness presents a collection of essays that attempt to locate the ethical task in response, not to ethical situations, but rather to the God who is on mission. His act in reconciling the world is primary, and so his continuing mission leads the way. We are invited to follow and engage in living witness. In the best of these essays, we are reminded that God has revealed himself in his mission to those outside, to those in poverty, and to those who suffer. To the extent that Christian ethics thinks and acts in line with this missionary movement of God, it does so in the right direction.