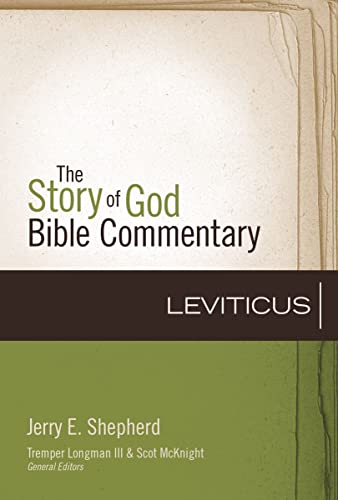 The Story of God Bible commentaries are written for clergy and lay readers. The series aims to exposit the biblical text within its ancient context and to read each passage canonically; that is, to identify “the trajectories (historical, typological, and theological) that land in Christ in the New Testament” (p. xv). Jerry Shepherd, associate professor of Old Testament at Taylor Seminary, Edmonton, has produced a readable and engaging commentary which realizes those aspirations admirably.

The introduction covers expected ground with a discussion of author, date, genre, style, structure, and historical setting (pp. 1–13). Matters of composition are deftly tackled and with greater nuance than many commentaries at this level. Shepherd does not shy away from compositional complexity but, instead, expands the notion of inspiration to encompass the various processes that produced Leviticus, known or unknown. He approvingly cites H. L. Ellison in this regard: “No doctrine of inspiration is worth its salt that does not take the work of editors into account” (p. 6). Major theological themes are surveyed (pp. 13–21) before Shepherd outlines reading strategies for Leviticus (pp. 21–27).

The commentary proper divides Leviticus into twenty-six units which generally, but not always, follow the chapter divisions in English versions (exceptions include taking 6:8–7:38 as a unit and subdividing ch. 24 into vv. 1–9 and 10–23). For each unit, a threefold rubric is applied. A “Listen to the Story” section reproduces the text of the NIV and considers any canonically prior biblical parallels plus relevant ancient Near Eastern comparative texts. This is followed by an “Explain the Story” section which works through the main interpretative issues in the passage at hand. Key options are surveyed and important (and, generally, accessible) secondary material is listed in the footnotes. Finally, a “Live the Story” section addresses matters of canonical meaning, Christology, and application.

Although adopting a similar approach to other non-technical commentaries, Shepherd nevertheless succeeds in making a distinctive contribution. Two features are worth highlighting, which alone make this volume a must for one’s bookcase. The first concerns the ancient Near Eastern texts surveyed throughout the commentary. While an expected feature of more technical discussions, Shepherd presents the series’ target audience with an array of comparative materials. This induction to life and religion in ancient West Semitic cultures builds a rich contextual background against which Leviticus is better read and interpreted. Thus, readers concurrently become students of both the ancient world and the Scriptures. Gaining a sense of the normalcy of Leviticus in its ancient context becomes a helpful corrective for those who find themselves confronted (repelled?) by the book’s seeming strangeness.

The second feature of note is the “Live the Story” sections. While suggesting possible applications is a common feature of commentary writing, such treatment sometimes tends towards being minimalistic or rudimentary. Pastors and teachers can be left underwhelmed. Not so here. Not only do the “Live the Story” discussions often comprise the lengthiest part of each chapter, they also succeed in providing more than tokenistic or culturally limited implications. The driving force for these sections is Shepherd’s conviction that there is more continuity between the world of Leviticus and contemporary churches than is often assumed (see pp. 24–27 and throughout). This conviction is coupled with a considered and nuanced Christology which exposes any misguided sense that the legal texts of the Old Testament are somehow made redundant by the advent of Jesus. Shepherd consistently teases out the ongoing instruction that Leviticus provides for Christians. For example, the legislation in Leviticus 15 regarding impurity arising from bodily discharges raises the specter of seeming irrelevancy for contemporary readers. To the contrary, Shepherd draws out ongoing significance. He rightly questions an understanding of the Gospels which holds that “when Christ came, he put an end to a very oppressive and overly cruel system of purity rules and regulations” (p. 199). In fact, Shepherd utilizes his understanding of Levitical purity legislation to illuminate dimensions of Jesus’s salvific work portrayed in the New Testament: “Christ is the one who not only heals us of our impurities, but he does so by taking our impurities on himself” (p. 202). Similarly, other Levitical themes such as living a life that God finds pleasing (p. 40) or God’s people becoming covenant breakers (pp. 353–55) are carefully explored with an eye to Christian implications. The result is a deeper appreciation of oft-muted New Testament themes.

Of course, not all readers will be equally convinced at every point. For instance, and against the grain of scholarly consensus, Shepherd argues, based on appeal to “the sin of the first parents” (p. 166), that the dynamic of purging sin should be maintained with respect to the purification offering (NIV “sin offering”) even in situations where sin is not identified as a problem (e.g., childbirth in Lev 12). Also, in places, Shepherd remains (in my opinion) overly dependent on the work of Mary Douglas—either directly (e.g., pp. 156–60) or indirectly through other commentators (e.g., p. 293). Furthermore, some readers (denomination dependent, perhaps) will deem the strong correlation maintained between Israel’s priests and ordained Christian ministers problematic (e.g., pp. 120–27).

These, however, remain minor quibbles with what remains an excellent commentary. For those desiring to understand and teach Leviticus, Shepherd’s volume is a must have. The “Live the Story” sections alone are worth the investment. Here also lies the primary benefit for seminary students: application of a rigorous hermeneutic that takes seriously the task of reading Leviticus as Christian Scripture. The results are consistently thought-provoking and theologically rich.