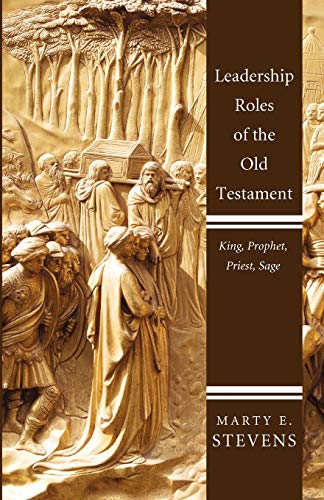 Stevens teaches biblical studies at Lutheran Theological Seminary in Gettysburg, Pennsylvania. Although this book is a loose sequel to her previous book, Theological Themes of the Old Testament, it can be read as a standalone book (p. x), as it is in this review. The book is aimed at laypeople (church groups, college classrooms, seminary courses; p. x) so there are no footnotes (p. xi). The book contains four chapters, one each for the four leadership roles Stevens identifies in the OT: king, prophet, priest, and sage. Each chapter follows a similar structure: terminology and then a combination of vocation, roles, or duties. A brief list of books for further reading and a Scripture index complete the book.

Chapter 1 outlines the role of an Israelite king, emphasizing the human king’s rule under God, the true King of Israel. The duties of the king are described under the categories of securing the property (physical land and its boundaries), securing the progeny (royal succession), and securing the divine presence (temple and religious rituals). The chapter ends with a helpful discussion of the Israelite kings falling short of their task to “mirror the reign of the Divine King” (p. 28). Mention is made of Jesus the Messiah as the endpoint of a “theological trajectory,” which takes place “in the early Church” (p. 30). Considering the intended audience, clearer links could have been made to the NT, especially how Jesus is the ultimate king in David’s line (e.g., Matt 1:1).

The next chapter discusses the prophetic vocation. This is set on the background of ancient Greek and ancient Near Eastern prophets who speak in the name of the divine (pp. 33–34). The social location of prophets is also described, along with a short section on true and false prophets. Different forms of prophetic speech are outlined, followed by a summary of the prophets’ message: covenant faithfulness, exclusive loyalty, economic injustice, ritual without righteousness, and hope of ultimate salvation. The last element of the prophetic message outlined here focuses on salvation by God’s grace and mercy (pp. 62–63) but does not follow the trajectory through to the ultimate expression and anticipated fulfillment of God’s salvation in Jesus Christ.

Chapter 3 outlines the priestly vocation, which functions as the intermediary between “the divine” and the people. The duties of a priest are described under the headings of sacrifice, purification, divination, and teaching the law. The sections on sacrifice and purification helpfully sketch the different sacrifices, along with the concepts of consecration/profanation and purification/defilement. The section on divination could have been condensed. The chapter concludes with a discussion of the difference between Levitical and Aaronite priests, based on a reconstruction of the historical development of biblical texts (pp. 85–90).

The final chapter traces the role of a sage, a wise advisor of the family and a community, and the king. The leadership role of judges is mentioned briefly as a task of elders. The chapter then discusses the place of a sage as a teacher, both in the royal court (royal school) and in a family setting (parent-child). This is followed by short summaries of the type of wisdom found in Proverbs, Job, Ecclesiastes, and Psalms. The chapter ends with a paragraph that concludes the book as a whole: all four kinds of leaders in the OT long for “a lasting relationship with God”; all roles reflect God’s character: “gracious and merciful, slow to anger, and abounding in steadfast love and faithfulness” (p. 112). However, some evaluation of relative importance of the different leadership roles would have been welcome. For example, does the order of presentation of the leaders in Deut 17–18 suggest a certain hierarchy?

There are many good aspects of this book. The language is suitable for the intended audience, and it is clearly written. The definitions at the beginning of each chapter provide insight into the background of the four roles and are a helpful entry into the subsequent discussion in the chapters. There are not many books on leadership in the OT; other books cover similar but not identical leadership roles, e.g., Joseph Blenkinsopp, Sage, Priests, Prophet: Religious and Intellectual Leadership in Ancient Israel (Louisville: Westminster John Knox, 1995); Lester L. Grabbe, Priests, Prophets, Diviners, Sages: A Socio-Historical Study of Religious Specialists in Ancient Israel (Valley Forge: Trinity Press International, 1995). So this book, especially since it is aimed at the layperson, helps to fill the gap.

However, I would recommend it with some caution. Not all readers will agree with the historical-critical assumptions underlying this book. For instance, “Third Isaiah” is mentioned (p. 2), along with “Second Isaiah” (pp. 6, 75, 98), and “The Deuteronomist” (p. 75). The prominence of textual history and sources is mentioned above in relation to the discussion about the priestly lines. Elsewhere, the biblical descriptions of the kings are described as an “exaggeration” (pp. 21, 23; cf. p. 96) or “tendentious” (p. 97). I acknowledge that different views about the production and theological stance of biblical texts are possible. Even so, alternative views are not offered for evaluation. This may be due to the constraints of this type of book. Yet it is in more accessible books that the influence of ideological positions can be more pernicious.