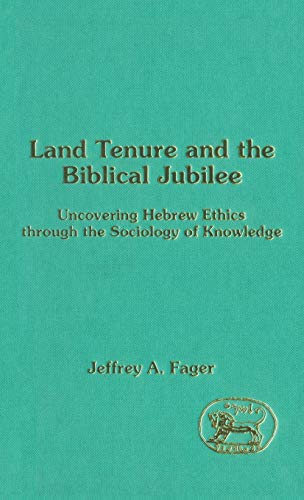 Land Tenure and the Biblical Jubilee: Uncovering Hebrew Ethics through the Sociology of Knowledge (JSOTS 155)

Written by Jeffrey A. Fager Reviewed By Daniel I. Block
Old Testament

This volume seeks to interpret the Israelite legislation concerning the year of jubilee by applying methods associated with the ‘sociology of knowledge’. According to Fager, Israel’s jubilee legislation represented a deliberate attempt to stabilize society during a period of crisis, which he identifies as the Babylonian exile. The destruction of the temple, the termination of the Davidic dynasty, the loss of the land, the apparent annulment of the Sinai covenant, the end of sacrifice and the decimation of the priesthood called into question the orderliness of the socio-religious universe. While many responded by capitulating to Babylonian theology and despairing resignation, among the intelligentsia, particularly the priests, some began to look forward to a restoration of order. Appealing to the traditions of Sinai (rather than Zion), the priests sought to reconstruct the Yahwistic community and the Israelite worldview on more secure foundations. However, these noble religious motives were mixed with a selfish concern to establish themselves as the basic legitimizing institution (after the demise of the monarchy). Within the priesthood, Ezekiel and his ‘school’ shared with the majority a vision of a theocratic state, but their view, based on fresh revelation from God, was more radical and utopian (cf. Ezk. 47:13–48:29).

In chapters 6–8, Fager appeals to K. Mannheim’s three levels of meaning to elucidate Leviticus 25, the basic document on the Israelite institution of jubilee. He discovers that objectively, the jubilee came into existence when increasing numbers of small farms were being absorbed into the holdings of wealthy creditors. However, since the periodic redistribution of land (every 50 years) would have been difficult to administer and probably disastrous economically, he doubts whether the jubilee was intended to be obeyed literally.

At the expressive level, by including the jubilee legislation in their legal code the priests attempted to strengthen the efforts of the returning exiles to reclaim the land they had been forced to abandon. They did so by adapting an ancient orthodox tradition to their own context. Under their influence the legislation took on more cultic and theological overtones, but they did not spiritualize it into an abstraction. Insisting on a relatively equal distribution of the land among the people, they sought to lead them toward a proper relationship with the land.

At the documentary level, Leviticus 25 reflects an even deeper meaning for the land tenure legislation. By linking specific individuals with specific tracts of land, their economic viability was ensured and family solidarity strengthened. In their adaptation of the tradition, the priests affirmed Yahweh’s sovereignty over all the world and repudiated any compartmentalization of life into sacred and secular spheres. Since proper land distribution is seen as integral to an orderly world, unequal distribution of land is therefore not simply a matter of injustice; it is a symptom of social chaos. Unlike Ezekiel’s utopian vision, the priestly jubilee acknowledges the realities of the world, but believes the present defects can be corrected here and now. Leviticus 25:23 is foundational to the priestly perspective: Yahweh is the true owner of the land, a notion whose broader implications Fager helpfully points out.

The author has performed a great service in clarifying the nature and significance of Israel’s jubilee legislation. His presentation is clear and well organized, and his style lucid. However, the study raises some nagging questions. First, Fager’s reconstruction of the history of the priestly tradition depends upon a speculative dissection of Leviticus 25 into literary strata (see the Appendix). Not only is the methodology suspect (cf. M. Greenberg in Ezekiel and His Book, ed. J. Lust (1986), pp. 123–135); lexical considerations suggest that several segments identified as late are probably early (cf. archaic (myt, v. 17; š‘r, v. 49). Second, on a related score, Fager’s understanding of the relationship between the Priestly Code and Ezekiel is questionable. His claim that there is ‘some’ evidence for the chronological priority of Ezekiel to P (p. 65) raises doubts about the strength of the evidence. But he never answers the doubts. Instead he carries on as if Ezekielian priority is incontrovertible (but see the contrary linguistic evidence amassed by Hurvitz and Rooker). Third, while Fager’s attempt to explain the jubilee legislation sociologically is extremely helpful, his interpretation of laws as ‘responses to existing situations and not hypothetical ones’ (p. 102) is unnecessarily categorical. Given the Ancient Near Eastern cultural context, the jubilee legislation could have arisen as an antidote to anticipated classism prior to Israel’s consolidation as a settled agricultural economy. Fourth, despite Fager’s own cautions to the contrary, his emphasis on priestly self-interest will be perceived by some as unnecessarily cynical. Such cynicism is fashionable in the present scholarly climate, but it is often based more on readerly assumptions about authorial intent than on objective internal evidence. The priestly document purports to present a revelation from Yahweh, whose intention is not to establish a priestly hierarchy, but a holy people, reflective of the holiness of the divine Suzerain.

Although questions like these may be raised, they should not detract from the importance of Fager’s study in drawing out the significance of the Israelite jubilee legislation. Scholars with a different methodology could arrive at many of the author’s conclusions, but by forcing us to look at the text from new angles he has highlighted nuances of meaning that might otherwise have been missed. For this service we shall all be grateful.